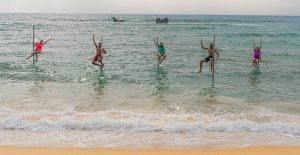 It’s the beginning of 2020 and the world is already on a somewhat of downward spiral – the end is nigh, death is imminent, social media menace is ever-present, etc. However, amidst this hopelessness, there are those who find a way to see through the smog. Shehaan Thahir and his “Wella Beach” project is one such example where the social media pest has been used to make real social change and hopefully alleviate the ever-present stress of environmental destruction by keeping our environment clean and plastic-free.

“Colombo’s first tourist-friendly beach” is the goal of the project, and its progress has been a revelation; in just over two months, with the help of about 1,200 followers on Instagram, Sheaan was able to get the ball rolling and lay some real groundwork in order to set in motion a sustainable model to keep the Wellawatte beach clean and make it tourist-friendly.
We spoke to Shehaan and he was adamant on insisting that this is entirely a community-sourced project, one does not need to have a massive following to effect change, and that we have the power to make change happen. He said that the tiny Instagram following he began with was the strength of this project – this is how he came up with ideas, solved issues, got suggestions, and got the word out for potential investors.

We spoke to Shehaan about the “whys” and “hows” of the project and the incredible success he’s achieved in such a short period of time.

Why this is important

Shehaan shared that as he often visited the Wellawatta beach for his morning workout, he would do the best he could on his own to do his part and clean up the stretch he uses as practice, and as he did so, many others would join him.
Being familiar with the beach stretch and seeing just only one bin available for 500 m of beach to dispose plastic, Shehaan decided that something needs to be done in order to keep the beach clean, thereby encouraging people to come and freely use it.

He decided the best way to keep the beach clean is to make it a hotspot for people to want to hangout, which has been successfully done in many parts of the world, especially in Asia.

Sharing his thoughts on the project, as Shehaan provided on his Instagram, Wellawatta is the only beach in Colombo and is easily accessible from the main central business district (CBD) within a few minutes. It’s incredibly easy to access Marine Drive and drive straight down to the Wellawatta beach. There are 300-plus rooms just on Airbnb alone, from which it is only a five-minute drive to the beach.

Most importantly, for a capital city of a country, the number of free/nominal fee attractions that Colombo has to offer is very minimal, and so it was ideal and actually a necessity to make this happen.

Shehaan believes that this wouldn’t be much of a challenge if everyone did their part and that they’ve nearly achieved their goals with regard to cleaning up the beach. In the very beginning, Shehaan had shared on his Instagram that he would be cleaning up the beach every few days and had asked for people to join him if they wish.

He said that frankly, at first, only one or two people joined him in the morning. However, then he started a YouTube talk show titled “Trash Talk” where he would interview prominent figures in the island to ask about their morning routine and to raise awareness about the importance of keeping the beach clean.

The talk show garnered the initiative some traction, following which the clean-up has been going far smoother. He said at first, Mindful Travels got in touch with them, after which other groups also joined – they would come together periodically and organise beach clean-ups.

The project reached a more sustainable model with the pledge by Port City to continue to keep the Wellawatta beach clean, funded by Cleantech by Abans, where they would arrange five people to clean the beach daily. Shehaan said that while he is yet to see these people at work, he has noticed that the beach is more consistently cleaner now.

Cleantech has also installed a segregated bin on the beach stretch for plastics and glass separately, and this, in addition to the massive metal bin installed by MAS Holdings, provides that people will not have to walk a distance to discard their plastic waste.

At present, there is an arrangement with Global Towers Hotel where they would provide showers and a free breakfast up to five persons for those who come and help clean up the beach in the morning.

The idea of beautifying came about as a means to an end, as Shehaan’s original goal was to find ways to encourage people to keep the beach clean; making it “instaworthy” was just a step in order to achieve those ends.

In the process of making the beach Bali-esque, one thing they are doing is installing fishing stilts much like the ones found in Unawatuna or anywhere else down south where tourists are allowed to take pictures and even get on the stills for a fee. It’s a great photo op and we have a proven model in Sri Lanka itself to show that it works and is successful.

This step of installing the stilts is now underway and if all goes well, it should be available to the public from this week onwards. They will be installed in water just outside the Wellawatte Railway Station. These stilts, which are prepared by the same people doing the tourist attraction in Unawatuna, cost Rs. 3,000 each to make and Shehaan said he simply put it out there (on his Instagram), and followers and supporters simply offered contributions; it was fully funded within 24 hours. He added that no branding will be allowed on them.

There is a sponsorship with JAT Holdings for water-resistant paint in order to paint the stilts and make them look more unique and attractive for photographs.

The next step is the “Insta wall”, which consists of eight walls of the Kinross Swimming Club in Wellawatte, and they have received approval to paint these walls and make it an attraction for people to pose in front of it for Instagram.

The artist who will be handling the project is Geshany Balder. She will be the artistic director and handle the larger thematic elements of the mural. However, they will be getting six other artists to contribute to the wall. The artists will start painting the mural on 6 February and this project is fully sponsored by Asian Paints Sri Lanka.

To look into the trash issue from the canals, bringing garbage from within the city, is the next step of the project.
If we are successful in this, then we can expand on it and really make Colombo a coastal city. It is quite ironic that people who come to Sri Lanka for the beaches have to go all the way to the southern coast, despite us being an island, and out city doesn’t have a tourist-friendly beach.

This will also lend itself to the security issue in and around the beaches, particularly with regard to certain nefarious acts that are the regular goings on the beach; if the Wellawatte beach becomes a popular spot for people to hangout, then it can become a more metropolitan area where restaurants and cafes can come up. Currently, “Vaadiya’ is the only beachside restaurant in the area and if more outlets were to come up, these businesses will employ their own security measures to take care of their patch of land and keep their stretch lit up, allowing for a collective security system and incentive for visitors to spend more time on the beach.

In a Trash Talk episode, Harpo Gunaratne said that the Wellwatte beach can be the Miami beach stretch of Sri Lanka.
So, like Shehaan often says: “What’s your excuse?” Make change happen and use your social media presence to effect change. This is but one example of what a small pocket of individuals can achieve if they genuinely cared just a little bit.

A chat with Shehan

September 3, 2018 byJennifer No Comments
The latest Sri Lankan cover of Girls Like You by Maroon 5 done by Shehan has been making the social media rounds lately.

June 14, 2020 byJennifer No Comments
The programme was said to have started last Monday (8) in Anuradhapura and was directed towards tracking wild elephant movement to minimise human-elephant conflict (HEC).