Not being a huge fan of desserts and having friends who can’t seem to keep away from all things sweet has become a conundrum I’ve come to view with amusement now. So when a dear friend sent me a jar of arrack chocolate biscuit pudding courtesy Sri Lankan artisan dessert brand Bellissima, I dug my spoon into the mixture with caution. Long story short, I spent the next few minutes profusely thanking my friend in my head and marvelling at this Sri Lankan-favourite dessert with a contemporary twist – golden biscuits smothered in the finest chocolate cream, infused with arrack. 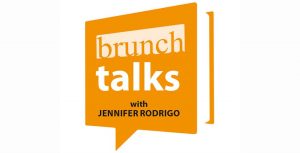 The man behind Bellissima – Dush Ratnayake – describes himself as an “oddball, loyal, and passionate”, moving on to explain that he secretly started cooking when he was seven and has never looked back since. “This (cooking) was something so innate and natural that it never even occurred to me that I could make a career out of it. It’s like if someone told you that you could make a living out of sleeping.” Ratnayake eventually did realise that he could survive the rest of his life doing what he loved and went on to run several food businesses, finally ending up where he is with Bellissima.

What grabbed my attention and brought Ratnayake to Brunch Talks this Sunday, however, is his debut cookbook titled “Kitchen Reboot” to be launched in August this year. Ratnayake, who has a very unbridled style of cooking and hopes to capture this in his book, said he knows that this “is the opposite for a lot of people who end up encumbered by very purist conditioning, especially as they become more educated about different cuisines and grow into knowledgeable foodies”. What he is suggesting is that we throw all this out the window for a little and simply enjoy our kitchens. “Forget origins, borders, and authenticity and just focus on your dishes tasting good. I’m not saying to disregard tradition or be disrespectful, but to let loose in the kitchen sometimes. Hopefully, this book helps.”

The book is going to feature 80-plus recipes that can be easily whipped up in any kitchen. The recipes, whilst not being traditionally Sri Lankan, are heavily influenced by the island.

“I love sharing ideas or any skills or tips that I’ve picked up with whoever is willing to listen and want to share their body of knowledge with me in turn. I understand that a book is a bit one-sided as a medium, but I felt it was an effective way of communicating my philosophy on food and my very personal understanding of cuisine, as I have never received any kind of formal training,” shared Ratnayake.

Ratnayake was born and grew up – for a significant part of his life – in Colombo, and schooled at S. Thomas’ College, Mount Lavinia. He graduated with a degree in finance and a minor in botany from Miami University of Ohio, and also worked for a short time in the finance industry both in the US and here in Sri Lanka.

He refers to himself as an “oddball” because he feels people generally find it a little strange how his brain works. “I remember one of my old bosses saying that most people have linear conversations but talking to me is like trying to make sense of a 3D scatter graph with no legend.”

Colouring outside the lines

Bellissima started very organically for Ratnayake, who was running Cafe Eklektik at the time inside the Goethe Institut. “It (Cafe Eklektik) catered to a hodgepodge of clients with wildly different requirements,” he said, going on to add that one segment was the embassy crowd, and visiting artistes who would stop by for tea. “They required something a bit more exciting than your standard cupcakes etc., so I started creating cheesecakes (making the cream cheese from scratch). I did about 30 different kinds with crazy flavours that caught my fancy. At this point, I realised that the desserts were at odds with the rest of my menu and needed to be spun off as a separate brand.”

Commenting on the recipes in his book not being traditionally Sri Lankan, Ratnayake said that the collection is “definitely not an Anita Dickman or even a Chef Publis-style book that places emphasis on tradition or authenticity”. He explained that what he has done is strive to simply capture the style he cooks in to entertain friends and family. “However, almost everything I cook has a distinct Sri Lankan soul. I’m very liberal in my use of roasted curry powder, coconut milk, and curry leaves for example, but very few recipes are actually curries.”

Known for his artisan desserts by most people, Ratnayake candidly shared that he realises that people were probably expecting a cookbook featuring solely desserts from him. He, however, chose to purposely go lean on the desserts because he didn’t want to be typecast as the “dessert guy”. “If I were to share a secret, my favourite things to make are usually savoury soups and sauces.”

“Don’t worry,” he added quickly: “There is a chocolate section in this book, but the ‘dessert only’ book is going to be the next volume I write. It’s already written up in my head.”

The book itself is something he’d been attempting to write for over a decade and he only finally restarted the project this year with a “clean slate”, deciding simultaneously to keep it straightforward and simple. The book is structured around 10 of his favourite ingredients with easy and sometimes unique applications for recipes.

Speaking to Ratnayake, it’d be hard to miss his engaging way with words, and the book is a union of that talent with his love for food. Recalling memorable years at college in the US, he said that he was blessed to be in the creative writing class of Prof. Dr. Myra Balok. “She was the one to truly unleash me as a writer. As I mentioned before, my mind is a kaleidoscope of tumbling thoughts. She empowered me to structure this mess and articulate my points.” In Kitchen Reboot, he gets into a lot of anecdotes so that people understand the inspiration and story behind each dish.
The book took a village to create, according to Ratnayake, who thanked Siyath Gowin for his great photography which he thinks is what will truly ensure the volume is a world-class publication. He went on to thank Midaya Ceramics who have been “an amazing partner, with providing most of the crockery seen in the shots”.

“Thank you Lakmal and Sherryl for letting me wipe clean your kitchen and leaving you even without a rice cooker to make lunch while the shoots happened.”

He is grateful to his publisher M.D. Gunesena, “who have been equally excited as I am for this book”.

“Rasangi, who pushed me to write the book in the first place, and Nimeshan and Sanjaya, who are my sounding boards for ideas. Last but not least, Batta, who loaned me his laptop so I could actually write the book! There’s probably a hundred more people I need to thank, but I better stop here.”

What does the future hold for Ratnayake of Bellissima and Ratnayake, the author of cookbooks? “Retail is one area we want to get into in the immediate future, and start selling our products in supermarkets. As a more medium-term goal, we want to start supplying our biscuit puddings to foreign markets, most likely India to start.”

He is “cautiously optimistic” about entering the book business and said, regardless of how well the book does, he’ll keep writing, because he enjoys it. “I’ve realised that the whole process of creating a cookbook is something that really makes me tick. As long as my publisher doesn’t drop me, I’m ready to keep going.”

RoyTho – The cricket is incidental

March 8, 2020 bythemorninglk No Comments
It’s that time of the year again; for cricket, testosterone, drunken escapades, and adult males enjoying schoolboy behaviour a little too much.

September 26, 2018 byJennifer No Comments
In view of the 208th Mexican National Day The Kingsbury will be featuring a Mexican themed Ala carte menu from 21 - 27 September at The Grill, carefully curated by Chef Alondra Maldonando, who has