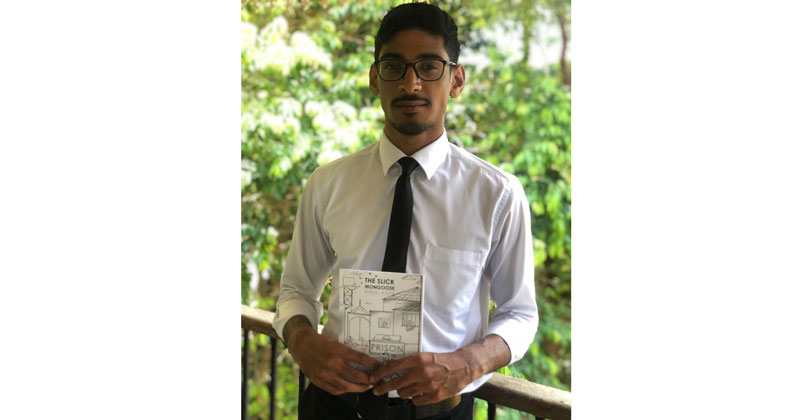 The story behind The Slick Mongoose

The man behind “Colombo Poets Presents”, Mishal Mazin has taken a few giant steps further by deciding to launch his first book “The Slick Mongoose” 16 March, 2019 from 7 p.m. onwards at Sooriya Village. This is an open event and all poetry lovers are welcome.
Excited about his first solo poetry reading event, Mishal spoke to us about his book, his inspirations, and his future plans. Here’s what we found out.

Tell us about the book.

The book is an impressionist narrative written in free verse poetry that mostly depicts Colombo as a living, vibrantly morphing entity and its people and their mentality. Sometimes, the poetry dips its fingers into politics and love but it usually speaks of my meditations whilst riding my bike around the city, the vivid imagery of iconic cityscapes and a boy searching for his identity.

What was your inspiration behind this creation?

By the time I had decided to compile the work that made The Slick Mongoose, I had already written most of these poems. It was mostly a matter of what the compilation intended to portray rather than a sudden spark of inspiration. I think coming up with the name of the book played a large part in its composition, it helped create the structure for what I was trying to showcase. The name “Slick Mongoose” comes from the town Rajagiriya, coined by Ananda Coomaraswamy, the Governor at the time whose Malayali servant saw a mongoose in his garden and screamed raja kiriya! (large mongoose). This name stuck and I, being from Rajagiriya, and looking slightly mongoose-y myself, thought this quite appropriate for a book title.

Do you think we are more inclined to accepting failure when it comes to creative expression in Sri Lanka?

I think creativity is undermined in this country for sure. The mentality concerning creativity is underrated perhaps not because it is of no material value, or that there’s no money made from it, but rather because no one understands the application of creativity in one’s work. You can be creative with anything; fixing pipes, making soaps, plucking tea leaves (basically anything), it need not be just those associated with art, but I do not believe this is how the majority see creativity or choose to apply it.
In my opinion, accepting failure or “that’s just how it is” is a syndrome that comes more from the country itself than the individual. We live in an atmosphere that does not encourage or reward creative work or creative people.
However, I do believe this is changing, and with it I hope the inspiration to exceed one’s own expectations to take lead and collectively shift consciousness to better oneself no matter their standing in life emerges. In this state of flow and focus, creativity naturally flourishes.

In your opinion, what will this book contribute to young people in the country?

To be completely honest, I had nothing in mind for the young people when I was writing this.
However, I’m sure the many foreign-born youngsters who experience a culture shock when moving back into this country and even more so, the locals who were born and raised in Colombo would feel these verses sink deep into their bones and understand where they come from and what it is I saw, that everyone also sees.
Ultimately, if someone is moved in some way or taken back to the feel of their hometown, I think The Slick Mongoose has accomplished what it set out to do.

Are you working on any new projects?

I’m working on a larger project inspired by Greek classics with a modern-day twist to it. The book would probably span a couple of hundred pages and would have much less to do with poems and more to do with the idea of poetry itself. It will challenge ideas of form and structure and yet have an evolved version of my writing style. Other than that, the usual deal; open mics, workshops, and the whole shebang.

October 13, 2019 byThe Sunday Morning No Comments
One cannot overstate the importance of voter and civic education during an election year and, in turn, the importance of the initiatives aimed at assisting voters better understand their rights

Colombo Fashion Week 2019 – the wait is almost over

February 10, 2019 bythemorninglk No Comments
The 16th edition of Colombo Fashion Week (CFW), Colombo’s premier fashion event and the hottest ticket in town is ready to kick things off.