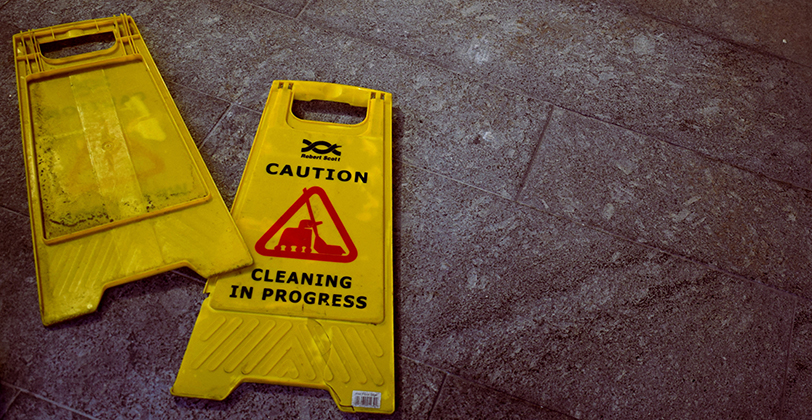 Taking a look at janitorial services in Sri Lanka

It is six in the morning. The city is waking up to a new day. Joggers jog along the tracks while others sip their cup of coffee to start the day. Perhaps, it’s too early for that some. There is still time till the alarm goes off. Then it will be another good morning, with hope to look forward to yet another productive day.

Above is the story of many, but not the story of Mallika*. She is 55. Close to retirement? No. She is not familiar with the word “retirement”. Almost all her colleagues are either her age or even elder than her. At six in the morning, Mallika was just returning from a night shift that started at 5 p.m. the previous day. So, is she going home now for her day off? No, her next shift starts immediately. It is her usual day from 6 a.m. to 5 p.m. Well, maybe she gets two days off after this. But it all depends on her luck. Certainly, it is not a two-day or even a day off. She will be released at 5 p.m. only to return to work again tomorrow morning at 6 a.m.

To make the picture clear, a cleaner who comes to work at six in the morning works according to the usual day schedule which is till five in the evening – an 11-hour shift with breaks only for meals. Then she may be scheduled to a night shift from 5 p.m. to 6 a.m., bringing the count to 24 hours. After the night shift, there is no going home. She would continue the usual day shift from 6 a.m. to 5 p.m. and then she can go home; the worker would be working for 35 hours at a stretch. Hence, in the usual scenario of having to do a night shift right after the usual day shift, the total working hours would be 35 hours with very little nap time. In case of an emergency, there is a likelihood of a 48-hour shift. The 48-hour shift does not occur often but is not rare either.

Being concerned by what Mallika and others in the janitorial industry, we spoke to top official at the Department of Labour, who wished to remain anonymous. The workers are governed by the Janitorial Wages Board and are legally identified under two categories – workers in the supervisory level and operational personnel. In an instance the janitorial board is silent on a certain work condition, the Minimum Wages Act No. 3 of 2016 applies. Although there is an applicable law, the law cannot be accepted as comprehensive.

Mallika has colleagues, mainly females, who go through the same mill. There are many cleaning companies – both of the government as well as private sectors – termed “environmental services” that do a good job to keep the institutions clean, and these institutions obtaining the service takes little or no responsibility in looking at how these cleaners are treated, leaving it completely in the hands of the janitorial company. There is a “loku miss” as the main supervisor, and under her many are assistant supervisors in charge of different branches of the institutions. All the misses are meticulously clad in sarees and the workers have their uniforms on, a t-shirt with the company logo and a pair of trousers. 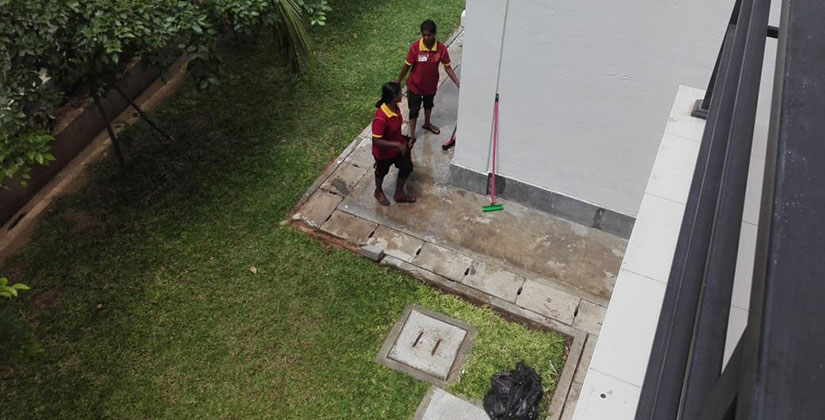 How is it out of Colombo?

Speaking to Attorney-at-Law Ravi Hettiarachchi, a former lawyer at the Employers’ Federation of Ceylon and now a private practitioner specialising exclusively on labour matters in labour tribunals across the island, we learnt that the situation is sometimes worse out of Colombo. In Colombo, the workers are more aware of their statutory rights such as EPF, ETF, and the gratuity. In the outer districts, ignorance is rampant and workers hardly know their statutory rights. Even if they do, the financial vulnerability does not pave the way to speak up because that would put on at risk losing the job.

There are labour tribunals across the island and the Department of Labour if you are terminated or unfairly treated. But are these workers duly compensated so that they can afford legal costs?
Typically, the daily wage on a day shift is generally less than Rs. 1,000 per day for an 11-hour shift. The wage for the night shift, which is 13 hours, is around Rs. 500. With such a wage, could one reasonably expect a daily wage owner to go against a company? Theoretically one would think it possible. But the real concern arises with its practicality.

The Legal Aid Commission of Sri Lanka provides free legal advice for all and free legal representation for the underprivileged. Speaking to some legal practitioners who appear on behalf of the affluent companies, they stated that the economically disadvantaged still could seek redress through free legal services. But another question pertaining to this solution is that does a daily wage earning cleaner have the luxury of time to seek redress, even though it’s free? Won’t having to go to courts, the tribunal, or the Department of Labour affect their earnings?

We met Nandawathie* who is 57. She has a bed-ridden husband who has been an invalid for 20 years. Her sons are casual workers and have become ill by working under harsh conditions in the road building and construction industry.
Almost all the janitorial workers we see are above 50, and rarely do we spot a younger person between 40 and 50 years of age. Hardly would one see anyone below 40 and definitely not anyone in the 20s. There are senior workers who are even in their 70s. What is the reason behind this?

Sadly, most of these workers have not been privileged to receive basic education. In fact, some cannot even sign, therefore use their thumbprint. Especially when it comes to the women, most of them have been housewives all their lives, having tried their luck in small business now and then in life. Forty-one-year-old Kusum*, the youngest we interviewed in the lot, claims to be a great cook. She had tried many things to rise in the eatery business by selling rice packets and short-eats on the roadside, among other things.

“Thing went well for some time, but when a bigger business person came to the locality, I kept on losing my business. Moreover, I needed a solid daily wage. I have school-going children. My husband too is a casual worker. I cannot take the risk of not having at least a certain amount of money every day. When I do business, there are good days as well as days I earn nothing. At times, the children would even go hungry. But in this, at least I have my Rs. 900 every day,” she shared.

The official at the Department of Labour and attorneys-at-law in the labour tribunal testified that it is extremely rare for a janitorial sector worker to come before the law in an instance of termination of employment, unless there is a joint application in case of mass retrenchment. In such an instance, the practice has been that they collect Rs. 100 from each worker and that would come to a fair amount to afford the legal fees when the labour force is of 1,000.

When statutory rights are violated, such as when EPF and ETF are not paid, they do inform – at times anonymously. The payment of gratuity too is unlikely as most workers would not go on to work for over five years with a particular company.
The cleaners we spoke to were rather too tired or bogged down by their personal problems to be educated about statutory rights. Changing the workplace for a better pay was stated as the wiser option than “fighting with the almighty”. Very few had the fighting spirit to speak for their rights. However, “kalu gale oluwa gaha ganna ona nehe owa karanna gihilla” (no need to get into deeper trouble by fighting) was the general attitude.

The other side of the coin

We managed to talk to Samaranayake* who owns the tender for the past four years in an institution. Her work force is 2,000 workers. “It is a herculean task managing all these workers,” she said. “They get absent without informing and how are we to cover the shift? That is why at times we are forced to employ them on an extra shift. We cannot leave the place dirty, can we?”

Perera* who is a supervisor had her own woes, said: “I have to keep an eye on them at all times. No matter how much I tell them what to do, it is hardly done the correct way.” Perera works in an outstation institution where the heat is scorching. “During the season where leaves fall, sweeping all the leaves all the times is definitely a lot of work – sometimes, 10-15 times a day under the blazing sun. But what can we do about this? The client would shout at us if leaves are scattered along the paths.”

In most of the government institutions, there is an administrative officer (AO) who oversees the functions. S/he hardly interferes with the practice but acts as a liaison between the parties. Senanayake*, who has been in the service as an AO for 10 years, having himself ridden the ladder being in the minor staff at the inception, did not have much of a positive report. “I get sandwiched between them at times. This is not the only task I have. I can see that the workers are not very well treated at times, but sometimes it’s due to their own fault. Some of them are negligent, lazy, and cunning. So I have to be smart too.”

Is cleaning services important? Of course it is, and we cannot do without it.

Then, is the way the cleaners are treated important? If there is a lacuna in the law, should steps be taken to rectify it? Till an efficient law comes into force, can we just have the lack of law as an excuse? Even in the absence of a strong law, do we not have moral and ethical obligations to speak up and thereby safeguard the interest and wellbeing of our fellow citizens?
It is time to believe that raising the voice can make a change.

*Names have been changed to protect the identity of the individuals.

The art of wildlife photography

March 5, 2019 bythemorninglk No Comments
The focus for the monthly lecture hosted by the Wildlife and Nature Protection Society was on the art of nature and wildlife photography and was conducted by Dr. Lalith Ekanayake.

August 25, 2019 byThe Sunday Morning No Comments
Conversations about the ocean, the metric tonnes of plastic hurled haphazardly into it, and the innocent victims that are the creatures of the sea are not few.