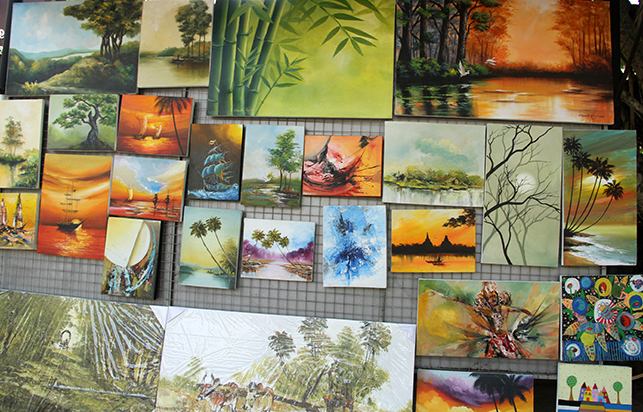 Getting to know the ‘Sangamaya’

While walls adorning the streets of Sri Lanka are turning into canvases, there is one street in Colombo along which hangs real canvases. While much of the street art in Sri Lanka are done by folks trying to find fill up their free time as well as beautify the streets with vibrancy, the artwork on this particular street are work by – although may be lacking a formal education in the arts – self-made artists who live and breathe art every day.

This street is none other than the Ananda Coomaraswamy Mawatha which lies in close proximity to one of Sri Lanka’s biggest indoor/outdoor theatres, the Nelum Pokuna Mahinda Rajapaksa Theatre. The road is often used by those taking the route to Horton Place, Alexandra Place, Wijerama Mawatha, or Ward Place. 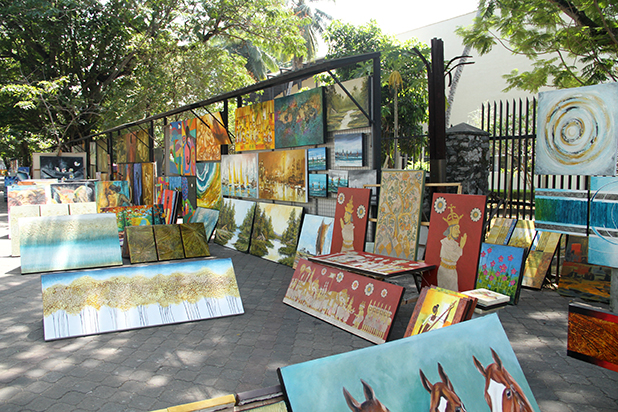 However, this road, unlike an ordinary one serving the sole purpose of transportation, carries much significance in terms of Sri Lankan culture and arts. Firstly, its importance comes with it being the road housing the country’s National Art Gallery. Secondly, one of the key features on this road is the display of multitudes of artworks which in themselves are a glorious decoration to the entire road. However, they are not simply for decoration; they are artworks displayed for purchasing.

We see every time we pass through this route people who sit along this street, showcasing various works of art, and some may be inclined to assume that they paint because that is what they love doing and have plenty of time in their hands. While painting is undoubtedly what they love to do, the group of artists themselves are a lot more interesting than what meets the passing eye.

What is interesting about these artists is that to be able to showcase your art along that street, you must obtain a special membership. The artists refer to this committee as the “Sangamaya” (meaning committee). The Sangamaya was founded many years ago and has obtained special permission from the Government of Sri Lanka to be allowed to showcase and sell the works of their members along Ananda Coomaraswamy Mawatha.

If one wants to sell their art on that street, he/she must speak to the Board of the Sangamaya and receive membership. Sangamaya President Nuwan takes all the decisions with regard to when and how members can be inducted into the committee. The membership does not come free; artists-sellers are required to pay a monthly sum of Rs. 500 to remain in the Sangamaya. However, currently, no amount of money would be able to get anyone into it as according to Nuwan, the display boards run in their full capacity. It’s essential to note that only a handful of individuals have the privilege of being vendors as they were able to join the Sanagamaya some four or five years ago.

Back then, they had simply lay their art across the ground or found some other way to display it. But now, they hang their work artistically and respectfully on display boards made of metal with meshes across it so that their pieces would retain their aesthetic value as well as be able to attract more customers.

These display boards were given to the artists under the presidency former President Maithripala Sirisena. Nuwan says there are about 20 such display boards at present and they are all full. Therefore, the committee is unable to enrol anymore individuals even if they wanted to. Whether it’s instantly noticeable that 20 artists are seen, these boards are completely covered with artwork of various styles all the time. Sometimes, artists have even taken up about two or three boards to display their individual work, thereby causing a lack of space for others to be able to display their work.

Selling on behalf of a loved one

The location, the way of selling, the types of art, etc. are very important to these people. Some who sell the artworks are not even the artists, but rather salespersons representing the artists. For example, in a stall at the end of the road, there is one individual who sells his brother’s art. While his brother focuses on getting a good product out, he conducts the commercial side of the transaction. He sets the art up at about half past 10 a.m. and stays on until about six in the evening.

The other vendors too follow a very similar schedule. Somewhere in the middle of the line-up, there was an amiable old man adorning his section of the road with vibrant, innovate, and truly striking pieces of art. When asked if all the displayed artwork were his, he smiled and proudly replied: “No, they are my daughter’s and her husband’s.” 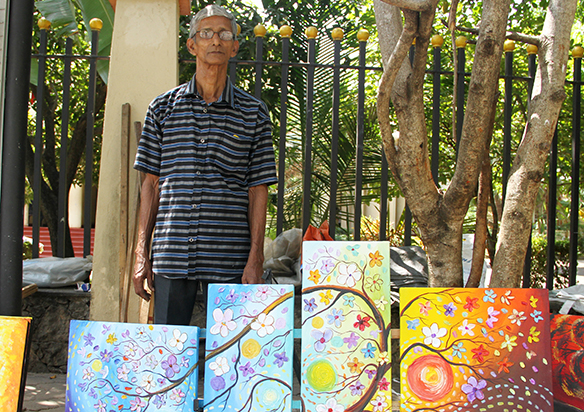 The couple needs their own space and time to get their art into place – art, as we observed, extremely unique and striking. There was one specific artwork which his daughter had created that which consisted of embossed flowers – it instantly caught the eyes of both the journalist and the photojournalist who stared at it in awe for a good three minutes. While her art is more concerned about figures and shapes, her husband’s art is more abstract and vivid. While her lines are thick and determined, his are more free-flowing and light. When the two types are displayed together, as you could imagine, it looks as though all the elements of the Earth have come together and remain in perfect harmony and balance. 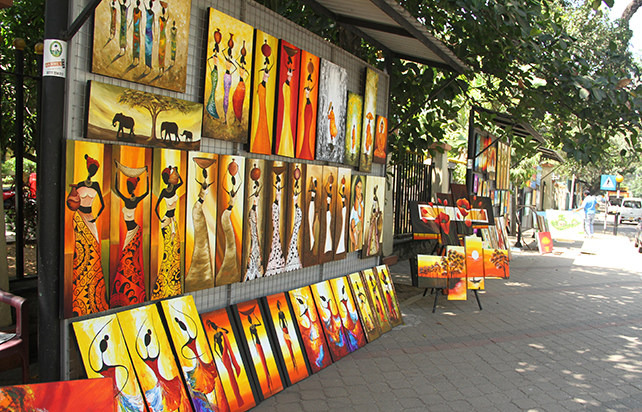 The father sells the work on Ananda Coomaraswamy Mawatha. He is not an artist and has never painted professionally.

Similarly, another individual towards the other end of the street sells art for his uncle and brother. When he was asked why they were not present, he said: “They need to be free to be able to paint.” He however engages in both selling and painting. Unlike his uncle and brother, he gets inspired from time to time and can express it wherever he may be. 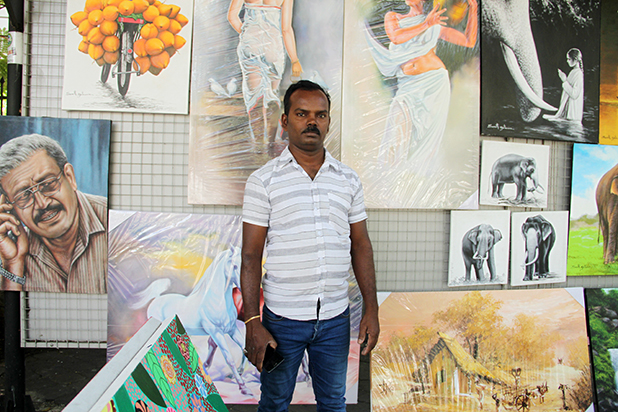 A workstation by the road

There are also those who sell their own work. In fact, there is one individual who paints at the location itself. He places his work at the very end of the road – on the side of Alexandra Place – and waits there all day long. He takes the standpoint that abstract art can mean anything to anyone while other art forms usually mean only one thing. 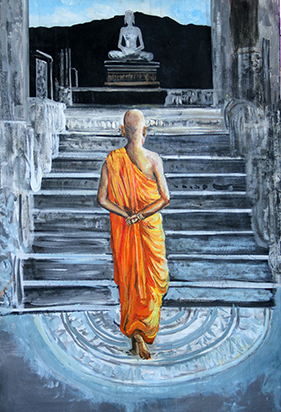 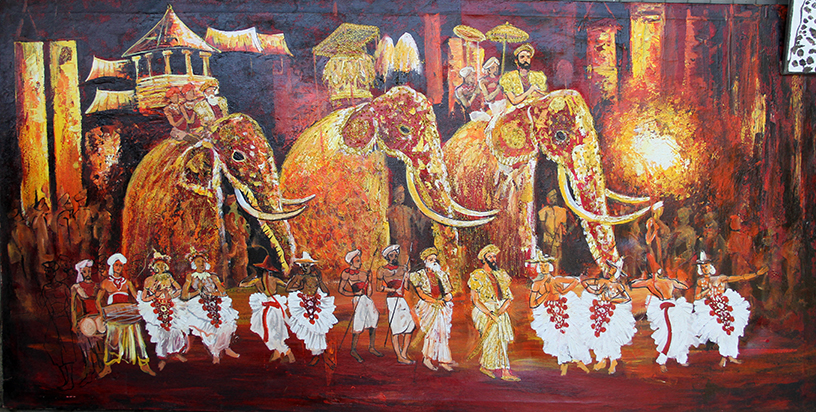 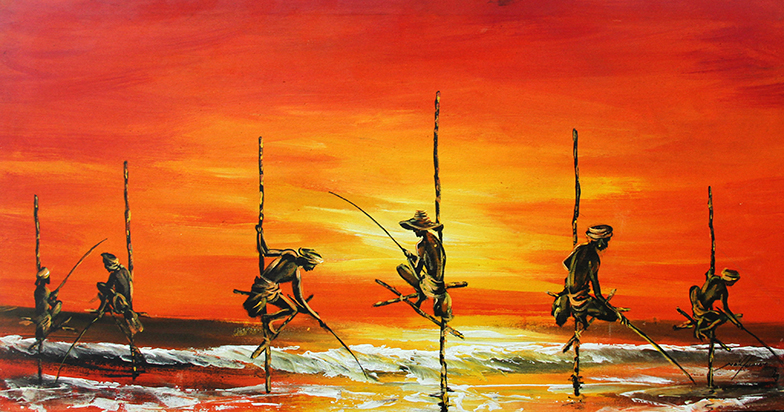 “Abstract art can be transformed into anything as the painting goes on, but other art forms begin with an idea in mind and are meant to give a single message to the audience. Usually, the viewer of the piece often meets the artist and they both see the same thing in the picture,” he elaborated.

He highlighted many problems that arise when individuals come to purchase art. The main issue of which, he said, is that the general public seems to lack finances required to purchase artwork. “I see they want to buy it, but sometimes, even though they may understand what art is, have a good knowledge about it, and can appreciate it to the maximum, they do not have the necessary resources to purchase it. Sometimes, those who can afford it have no idea about it. We see that foreigners often desperately want to buy a souvenir, so they somehow purchase. They also don’t want to embarrass themselves, so they pay whatever price we ask them; they know how to appreciate art well, so for them, it is always worth it and they are so fascinated by it. But it is just sad to see how Sri Lankans come and stare longingly but can’t always buy.”

While he expressed his sadness in this, he also believes that art lives with us every day. He spoke about how colour defines our lives and how people dabble with colour every day of their lives. He said that colour is everything and that if one looks at how much people work with colour on a daily basis, it would seem like everyone was an artist. He is extremely philosophical in his thinking, and to him, it is his art that has made him so.

Similarly, there was another individual who displaying his own work on a few boards. He has a very special talent, but he finds it difficult to showcase it on the street. He is so talented that he can listen to a song, mimic the artist on his own, and then draw the portrait of the singer he imagines within the span of the song. He said wishes to perform this special act on television someday, but said he cannot always leave his other art aside. Nevertheless, he believes diversity is important in life and people shouldn’t always stick to one field of work. 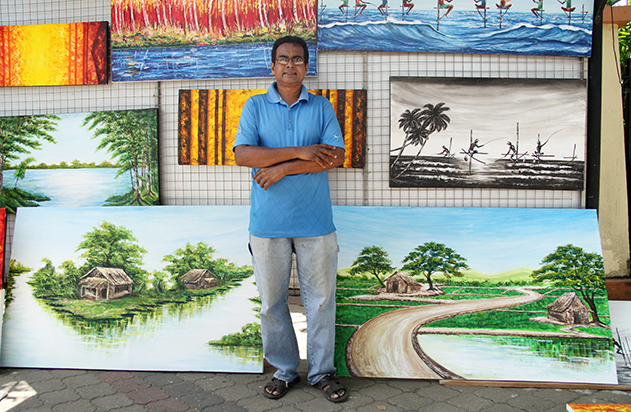 Ananda Coomaraswamy Mawatha is an important road to the culture of Sri Lanka; it is important not only because it is named after one of our country’s most famous philosophers, but also because it is a platform which showcases the talent of Sri Lankans, for which the street isn’t gaining traction as deserved but certainly has great potential.

#safesrilankanow : How can a foreigner feel safe when a Lankan woman does not?

November 1, 2020 byCharindra No Comments
Sexual harassment has been a long prevalent ill that has been plaguing not only the nooks and crannies, but also the broad daylight of our society.