Travel and travel writing are voyages of self-discovery: Razeen Sally

“Sri Lanka is shot through with contradictions. In multiple and overlapping layers. It makes this island frustrating, often spilling into despair, but also fascinating and bewitching.”

Visiting Associate Professor of Lee Kuan Yew School of Public Policy of the National University of Singapore Razeen Sally’s response (above) to my question as to why he named his recent book “Return to Sri Lanka: Travels in a Paradoxical Island” resonated with me, as I’m sure it did with most who’d queried about the title.

The book, a travel memoir to be launched on 27 February at The Stables at Park Street Mews, is the story of a 21st-Century reconciliation between Sally, now an academic and political adviser, and the land of his birth.

The publisher, Juggernaut Books, notes in the dust-jacket of the book: “…it is a book full of spellbinding beauty and moving insight, from a writer who is a native, a tourist, both, and neither.”

“I suppose it captures my in-betweenness. I am half-half – half-British, half-Sri Lankan; half-outsider, half-insider. Always looking in, never quite belonging,” shared Sally, referring to the publisher’s inscription.

Sally currently resides in Singapore. He hasn’t lived in Sri Lanka since childhood but intends to spend more time here soon. Below are excerpts from an interview I had with him. 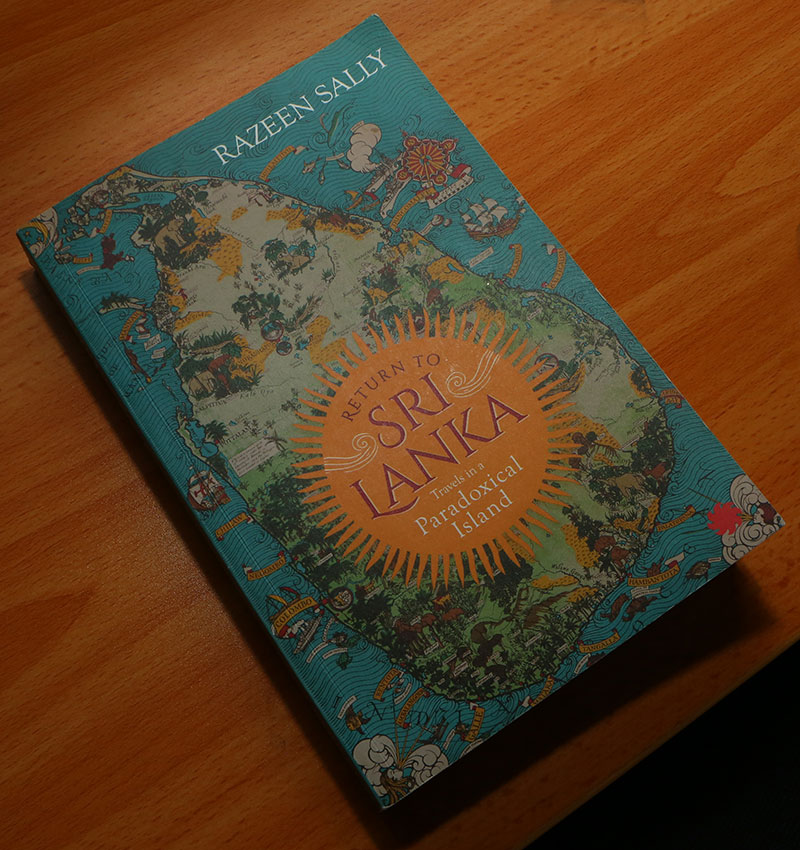 Q: If you could describe your childhood in three words, what would they be and why?

A: Bittersweet: My childhood memories, mostly set in 1970s’ Colombo, have strong flavours – sweet and bitter, but little in between. Bitter with family crises, many politically induced, and yearly displacements between Sri Lanka and the UK. And sweet with special experiences in Colombo, on south coast beaches, and, above all, in the Uva hills.

Unsettled: I went to eight schools and changed schools 13 times, split between Sri Lanka and the UK.

Half-outsider: I am half-Sri Lankan, half-British. I have never felt an insider anywhere, always at least half an outsider.

Q: If you could pick out one significant memory from your childhood that’s etched in your mind, what would it be and why?

A: The night the CID (Criminal Investigation Department) raided the family home in Ratmalana in July 1971. I was six. They took my father away. That was the beginning of over six years of family turbulence and convulsion. It was the night my political consciousness awakened.

Q: What three emotions/learnings do you want to leave with the reader of this book, what would you say?

A: Get out of your bubble and explore: I saw little of Sri Lanka as a child. I have only really discovered the country in the past decade. It amazes me what little of it most Sri Lankans I know have seen, rather staying within their comfortable Colombo and outstation bubbles. And most tourists stick to the normal tourist route – another bubble. So get out of the bubble.

Appreciate Sri Lanka’s stunning variety: I cannot think of another geographic space of comparable size that comes close to our sheer variety of peoples, fauna, landscapes, and coastlines. It is just so variegated and wondrous. And most Sri Lankans take it for granted or are blithely unaware of it.

Venture to the back of beyond: Once out of the bubble, make the extra effort to get well off the beaten track. Despite the spread of human settlement and urban sprawl, Sri Lanka is full of back-of-beyond wonders – places of space and fresh air and silence, abundant with birds and animals and trees, and leisurely village ways. It takes a certain disposition to appreciate these places, so not for everybody.

Q: What’s the one thing you dislike about the country?

A: Complacency. Robert Knox used the metaphor of the coconut tree’s varied bounty to explain the lotus-eating ways of Sinhala Buddhists in the Kandyan Kingdom. Why work when coconuts fall into your lap? The Wet Zone’s cornucopia induces a fatal lackadaisicalness. One sees it everywhere, though less so among the minorities. It is part of the charm of Sinhala-Buddhist culture. But it has a downside. Very little is properly maintained in Sri Lanka. As a friend puts it: “Sri Lanka is full of broken windowpanes.” Politicians routinely ignore vital historical lessons and spend profligately as if there is no tomorrow, and the public demands no less. Opportunities for repair and renewal are missed…always.

Q: What’s your most favourite place in Sri Lanka out of all your sojourns?

A: That’s difficult because I accumulate more favourite places with every big road trip. But if I were to pick one, it would be the Uva hills in the teascapes, paddy terraces, fruit-and-veg orchards, and mountains between Badulla, Hali Ela, Ella, Bandarawela, and Haputale. Certainly not the towns, now spoilt with sprawl, but the places back of beyond. What makes it extra special is that I spent childhood holidays there, on a little tea estate not far from Badulla where my father was born and grew up.

Q: The line on page 12 where you say, ‘I tear up with sadness whenever I look at these photos of Daddy, who did not fulfil youthful promise. I will write about that one day, but not here’. That seems like a very deeply personal statement. Care to elaborate?

A: No, not here, not now. It was an effort to write as much as I did about my father. Necessary and enough, I hope, to tell my story and link it to wider Sri Lankan themes. But the rest is too sensitive. It will have to wait for time’s passage.

A: The simple answer is travel. Starting in 2009, I travelled as much as I could and talked to as many people as I could. I retraced the steps of my childhood in Colombo Ratmalana and Mount Lavinia, down south, and in the Uva hills. I re-familiarised myself with relatives and old family friends. That was how I recreated what George Orwell calls a “mental atmosphere” (of my childhood) that was both intellectual and emotional. I rediscovered many things, good and bad: Colombo’s laidback vibe; the ease, warmth, humour, and fun of Sri Lankan company; the delight of taking to the road on outstation trips; but also pettiness, squabbling, backbiting, chauvinism, and much else besides.

Q: You also said you hoped to discover yourself. Did you?

A: Travel and travel writing are voyages of self-discovery. I knew that from my reading of travel-writing classics. And I hoped that would be true for me. It was, though still very much a work in progress. I discovered how strongly Sri Lanka pulled me back after my decades of absence – much more than I expected. I discovered my love for it, warts and all. I discovered a special love for its back-of-beyond places that give me inner calm and peace and contentment. Places for nurturing precious inner silence. And, most surprising, rediscovering Sri Lanka turned out to be part of a new spiritual journey into Vipassana meditation and its connection with original Buddhism. Travelling in an ancient cradle of Buddhism, especially its remote village temples and forest hermitages, some long abandoned to the jungle, gave this spiritual journey essential context.

Q: You say this book is a ‘never-before’ done venture and this is ‘much more free-ranging and eclectic than anything I have written’. How challenging was it to steer from academic or policy type of writing to something of this nature? What were the biggest challenges and how did you navigate them?

A: It was very difficult and agonisingly slow. It took eight years and three drafts of writing. I had to unlearn the ingrained habits of an academic or policy writer. Most academics are terrible writers. The best of them, and the best policy writers, write clearly, precisely, and economically, like good journalists. That has long been my aim. But “writer’s writing” also demands much more sensitivity to modulation and pace, and, crucially, a personal voice. Good travel writing is all about using a journey as a vehicle to tell bigger stories that capture a sense of time, people, and place. I had to discover all the above by trial and error. An excellent editor, Supriya Nair in Bombay, helped me enormously.

Q: In your travels around Sri Lanka and rediscovering the country and its people, what key concerns or observations would you say you’d like to talk about in relation to its people and the residual effects of the war? What are your recommendations to rebuild and not suffer a similar, if not worse, conflict in future times?

A: Too much to answer in a nutshell, but here is my best shot. I will return to familiar ground: The economy. Sri Lanka needs a faster, better growing economy to give decent life chances outside a charmed elite circle. That is also vital for inter-ethnic relations – to avert new conflicts, repair war wounds, and foster reconciliation. A stagnant economy means dangerously alienated youth, prey to communal extremism, and conflict over political patronage and limited resources. A healthy growing economy means the opposite. I am an economic liberal. I believe Sri Lanka needs a freer market economy, more open to the world, and a smaller but more efficient state. I am also a political liberal. Big Man authoritarian politics will not deliver the goods – it has failed before and will fail again. (In the) long term, only political pluralism will be an effective common denominator.

Finally, I am a social liberal who believes in a Sri Lankan Sri Lanka. Achieving all of that is elusive, and usually prospects seem bleak. But the fight must be fought. Success depends very much on a younger generation, with different attitudes and talents, breaking into politics, business, and civic life, and doing things differently. For now they lack the incentives, and the barriers to entry are extremely high. But the people and talents are there in all communities and around the island. I have seen them on my travels. I have seen some of the dark sides of Sri Lanka, but I have also seen some of what is best here. More than I expected when I set out on my journeys. That gives me some hope.

February 8, 2019 byJennifer No Comments
The Colombo City Centre is now the site of a brand new “W” Showroom, brought by D. Samson & Sons (Pvt.) Ltd a member of the DSI Samson Group.

June 24, 2019 byRandev No Comments
Indrani Wijebandara Senaratne, a popular singer has passed away at the age of 83 yesterday (23).