Kumarsutra – a night of comedic debauchery

February 4, 2019 by themorninglk No Comments 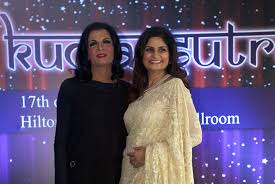 Delivered for one night only, Kumarsutra takes audiences on an inspired and heartfelt journey pieced together by Kumar himself, having drawn from his near-30 years in entertainment, wowing audiences on TV, the stage, and at Singapore’s many iconic comedy clubs.

An intimate but funny portrait of his own creation, the show is set to transcend all expectations, beyond age, gender, and race as Kumar leaves it all onstage, delivering his own brand of humor of novel storytelling, observations, and caustic remarks.

Kumar took the stage for a short press junket, giving us a small sneak peek into what Kumarsutra is all about – in almost no time he had the audience in stitches with his scathing yet candid remarks, commenting hilariously on his brief but interesting outing around Colombo.

“I decided to go shopping while I was out and about in Colombo and I went to Odel, and I was aghast. There was nothing there! I mean, who wants to buy so many elephants?” he said, drawing a nice laugh from the crowd. Kumar’s frank style of delivery is disarming in how truly hilarious it is.

However, you are most likely to be subject to a multitude of anti-marriage jokes, with typical “women are timid until they are wives” jokes in the mix, and some others that won’t settle too well with today’s PC culture while also feeling and sounding slightly outdated.

Regardless, Kumar’s insight into the LGBTIQ and trans culture, largely due to his stage persona being overtly androgynous and identifying as queer, is interesting and nuanced. A free spirit, Kumar is unbothered by societal norms. “Don’t be asking me stupid questions darling, like which bathroom do I use, because honestly even I don’t know myself, it’s seasonal.”

When asked about whether he is aware of the plight of LGBTIQ persons in Sri Lanka and their recent troubles with the media and Government, Kumar said: “I am not here to launch a political or civil rights movement; I am here to perform and entertain. I have no political agendas which is how I have survived in this industry for so long.”

Singapore too, remains a country that is yet to amend its colonial laws and advance to decriminalising homosexuality, but yet, for nearly three decades, Kumar has nurtured a thriving career, the secret for which he said is: “My performances are all in private, I do not do big shows where I am shoving certain beliefs down anyone’s throat.”

While Kumarsutra proves to be a unique effort, and promises to entertain, the event boasts a far greater purpose – much like Aita Dorai’s previous effort “Threads of Time” which culminated in the donation of 100 specially designed wheelchairs to Wheels for Wheels – the funding of an initiative by Around the Pearl which aids those living with cerebral palsy, through another significant donation to the organisation.