What to expect at Luna Music Festival 2020

On 7 and 8 March 2020, Luna Laguna, located in Thottakadu, Kalpitiya, will host the Luna Festival – a two-day, two-night affair with camping, yoga, and live music.

Following their success last year, this time around, the festival is taking a step further and are featuring a number of international artists as well, livening up the already impressive lineup.

Being the first of its kind, Luna Festival is the only festival in Sri Lanka which hosts its artists and attendees onsite with camping grounds and live gigs happening throughout the festival dates.

We spoke to a few of the local artists who will be performing at the event, some of whom are returning after an unforgettable time when they played the festival first time around and those whom are performing for the first time and are just as excited to experience something fresh and novel.

Shanelle who will be performing with the “Owl Tree-O!” – a musical trio – described their style as a meeting of heavy-soft vocals, synths, and beats, creating a symphonic cacophony. Speaking to The Sunday Morning Brunch Shanelle said that she is most looking forward to the fact that she will get to camp out as it is a first time for her, and of course she is excited to soak up the atmosphere of a two-day outdoor event which is sure to attract a lot of music enthusiasts.

Asela Perera who recently released his album “GOLD” will be performing his solo work at the festival. He too is participating for the first time and he said that he’s quite excited considering it is the first gig for the year and he gets to perform for a larger crowd than he is used to – what he usually refers to as the “melomanic session”.

We spoke to a couple of artists who had already played at the venue including The Soul – who shared: “It’s a rare occasion and always exciting to share the stage, listen, and bond with all the other artists in a festival setting and the location creates an intimate atmosphere for the audience making it feel like a little holiday. Soothing.”

Sumudhi Suraweera from the Serendib Sorcerers said that last year was such a unique experience, proving that it is very unique in its own way, as to his knowledge, this is the only such festival which is held outside of Colombo and the majority of the audience is actually local. Sumudhi too will be performing from his brand new album and shared that he is most excited to vibe with all the other artists and also to mingle with the audience as they will all be on one site.

Luna Music Festival is an initiative by Shirohana to enhance and create platforms for the cultivation of art and music and it is also one of Sri Lanka’s first family camping festivals, where people are encouraged to bring their own tents and stay in the festival premises to enjoy the music and mingle with the musicians and guests.

Forty artists are joining the setup to perform, including Jerome Speldewinde, The Soul, Serendib Sorcerers, The Many Roots Ensemble, Sougata Roy Chowdhury, Subhajit Brahmachari, and there will also be a special feature on 8 March (Sunday), in the morning, of poets performing their verses to live music. 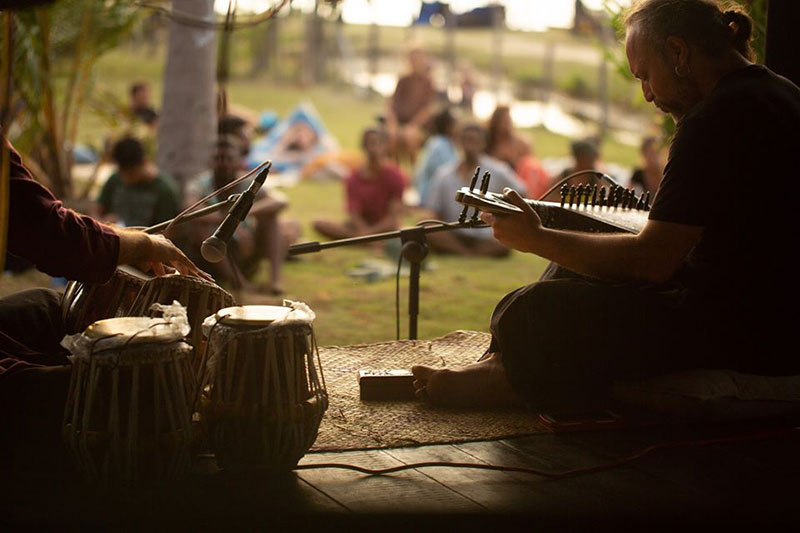 The restaurants of Kalpitiya will be serving up fresh food and drinks at the festival and the Luna Bazaar will be hosting socially conscious entrepreneurs, along with yoga and wellness workshops, a cinema, and the campsite.

The dates are deliberate said the organisers stating: “Monday is a full moon. This way, we can enjoy the festivities as a full moon glows over us and we are not pressured to go back to Colombo and the rest of the island immediately as Monday is a holiday.”

Most importantly, the festival is dedicated to providing support for the education of underprivileged children in Kalpitiya, through the proceeds raised from the festival. Two-day festival passes will be priced at Rs. 8,500 and are currently available at KIKU (Dickmans Road), Shirohana outlets (Alfred House Gardens and Borella branches), and online.

Luna Music Festival is an endeavour by Shirohana to enhance Southeast Asian music collaborations and is dedicated to creating platforms for art and music in areas outside of Colombo.

July 13, 2020 byNaveed Rozais No Comments
Colombo PRIDE has been taking place since 2005 and is organised by EQUAL GROUND, Sri Lanka’s leading advocate of political and human rights for LGBTIQ individuals in Sri Lanka.