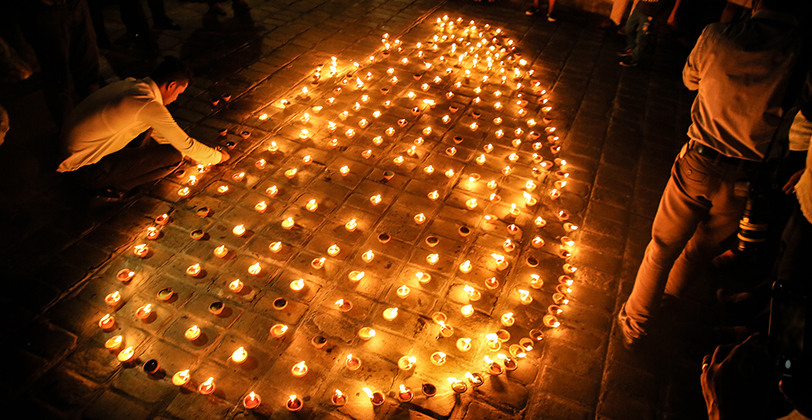 An evening of remembrance

In remembrance of a sorrowful time and for all the loved ones we lost on 21 April, the merchants of Old Dutch Hospital Complex brought crowds together last Tuesday (21), with the help of soul music, food, and drinks for a great purpose. The night was put together by sponsors such as Tap House, Harpos, Barefoot, Spa Ceylon, and many more coming together to make the event a success. Starting at 6 p.m., families, children, politicians, cricketers, and foreigners all gathered under one starry sky not as strangers, but as Sri Lankans where everyone sat down to reminisce what Sri Lanka was really about – its people, its unity. 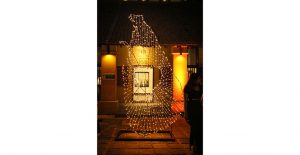 As the night progressed and the crowds grew bigger, the ceremony grew brighter by the lighting of oil lamps, which formed our little pearl of an island. Joined by Mahela Jayawardene, Harpo Gooneratne, and many other distinguished guests, each took the liberty of lighting a single oil lamp before the event started.

One of the main aspects of the evening was the main entertainment – the music. The spectacular moments that were experienced by everyone present that night could never have been what they were, if not for the meaningful melodies carefully put together by five different entities that unknowingly joined us all together. Securing the mood of the event was a collection of bands and soloists that gave a whole new meaning to the night with songs that moved our hearts and brought most of the audience to tears.

The Sunday Morning Brunch took the liberty to talk to our musicians, who came along to play for this particular occasion, with regard to what their thoughts were that night. 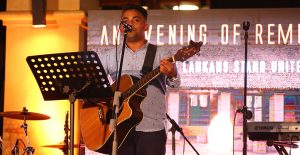 Sam is a solo artist performing at Dutch Hospital every Wednesday, who initiated the musical event of the night with a single performance with just him and his guitar.

“Since the events of the 21st of April took place, we discussed on how we would get all the musicians back together, here at Dutch, to kind of start things again. Because none of us have played music here since the incident, this was the opportunity for us to start once again and to pay our respects to all the people who were affected by these attacks. And what better way to do that than with music.” 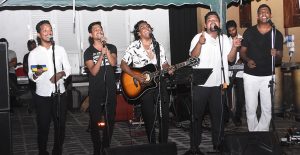 The acapella group of five sang from their hearts under one tent, focusing on what it meant for them personally to be there, at Dutch, to be a part of a night which will be remembered forever.

Ryan: “Music heals in ways nothing else can sometimes, and we thought it was best for us to do what we know best and come together to give our part of the contribution.”

Naresh: “It’s time that we bounced back as Sri Lankans and as a community. We are a war-torn nation that has seen the worst possible things in life. It’s really sad, but I think it also brings out our true spirit as true Sri Lankans to unite. We are all blessed to be born in a country like Sri Lanka. We don’t realise that most of the time. And I think Sri Lanka as one nation needs to pull through and support each other, and this was a very good start to bounce back and move forward.” 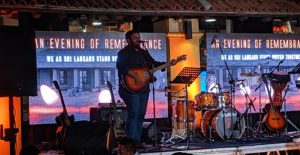 Minesh is another solo artist who arrived at Dutch on the night of 21 May to serenade the crowds with songs that were soothing and uplifting.
“I think it’s pretty cool for all these musicians to come together and sort of remember what happened a month ago. Each and every one of these musicians is coping through music, and today they are showcasing it for everyone to see.”

Dream Caravan was the final band of six to play before it started pouring rain at the Dutch grounds. The band continued to play on as much as they could through the drizzle, only stopping to cover up the stage and their instruments that were now getting wet.
Ryan: “I’m really glad that people came together at a time of need and that there are people like that who are always willing to help. No matter what your religion or political background is, we all live in Sri Lanka and you’re a Sri Lankan. So, whenever something happens to “your Sri Lanka”, it hurts. There are some people who think that there are certain religions or certain factions that have caused this, but it’s not the case. This was plain terrorism. I’m glad something (as this event) was organised – something that has music as well, because I believe music brings people together. The people here are from different avenues in life; people who have all come together today. And that is us. That is Sri Lanka.” 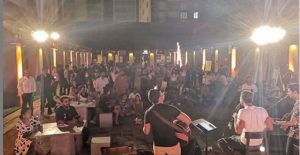 After the rain had passed, one final band of seven members took to stage to carry the message through music in the late hours of the night.
Shaun: “I think this is a really good cause and there’s just one message I’ve always thought about giving, which is people think that the terrorist community has a religion they to belong to. It is my personal belief that they don’t. Whatever religion they belong to, each of those religions preach only about peace at the end. All we have to realise is that we are one human race believing in god, whatever religion we are born to.”

Racing the pearl, one wheel at a time

February 3, 2019 bythemorninglk No Comments
“When we ride with our wheels on a bicycle, we wish to add wheels to a wheelchair,” says Yasas Hewage

July 10, 2019 bythemorninglk No Comments
Che Che’s Dumplings were around for more than three years, and took a small break some time ago. But guess what! They are back now!