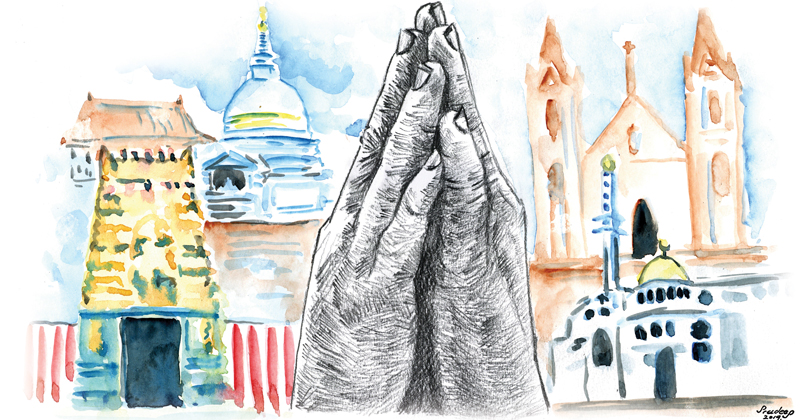 A time for introspection – festivities in a time of crisis

This weekend, Sri Lanka is set to mark 10 years since the end of its civil war, a decade of somewhat shaky peace. However, the otherwise celebratory date elegiacally follows the terror attacks our country is currently reeling from, also coinciding with Vesak and Ramadan festivities.

Considering the significance of these celebrations and the melancholy that is to accompany all these religious festivals, there has been no better time for introspection for Sri Lankans everywhere.
Joint Learning Initiative on Faith and Local Communities Director of Research Dr. Olivia J. Wilkinson suggested in her research that responses to crisis should engage local religious ceremonies as part of the overall response.
Wilkinson shared: “When speaking with those who had been affected by crisis, I heard the same thing time and again: People’s faith was important to them because it brought them personal, inner strength and it brought their community together and encouraged them to help each other.”

It would seem that current global proposals for dealing with crisis – resilience, community, and localisation are emphasised following a crisis, and religious festivities that are part of the fabric of the very nature of a country’s people are of grave significance and instrumental in rebuilding.

In Sri Lanka, we are currently struggling with a massive blow aimed at dividing every race and religion in our country; celebrations such as Ramadan have been constricted due to security concerns, rendering those of faith unable to truly celebrate.

As for Vesak, Parliament re-negotiated terms and issued public statements announcing that instead of five days, this year it will be observed over the weekend, 17 and 18 May. Collectively, religious leaders have also advised the celebrations to be quietly attended in temples and homes. The President also issued a note of awareness: Take precautionary methods to eradicate liquor consumption around the country before this auspicious day.

Reaching out to religious leaders about these precautionary steps and proposed advice in how best to celebrate the upcoming festivities, it’s evident that the majority are in favour of a subdued, spiritual experience for the time being.

Ven. Madawala Dhammika Ginavansa Thero of the Jethawanarama Maha Viharaya:
“Since recent times, the Vesak poya day has turned into more of a celebration with more and more dansals and pandols coming up and a lesser number of people going to temples. It has now gone off the rails of personal practice “amisaya” to an environment of only a festival. This time, it might be best to stop the celebratory atmosphere and opt towards going to the temple or observing simple pansil at home. The state of the country will not trouble the concept of Vesak, which will remain. It will only disrupt the festivities that follow under its name. As Lord Buddha preached, when things which we can no longer control occur, we should start thinking about the positive aspect of the situation, as we should now. I think this year, we will have a peaceful and prosperous Vesak the right way. Think this situation is, in fact, a blessing under wraps. The responsibility falls upon each and every one of us to go about the poya day accordingly.”

Ven. Dhammarathana Thero of the Gangaramaya temple:
“As a start, the annual Vesak festival which is held together with the Araliyagaha Mandiraya is cancelled due to the large number of people who will flock to one single place, which during the current circumstances would be dangerous. However, the annual sil observation will continue as planned. It will also be broadcasted on live television for those who are unable to attend. As a safe substitute for the festivities that won’t be taking place, a pirith ceremony will be conducted from 17-22 May at 8 p.m., mainly as a blessing for the entire country due to the recent incidents that took place. Since our countrymen have not yet settled down after the attacks, this is our best effort in trying to do what little we can to help them recover from this state. Celebrating Vesak as we usually do at home and at the temple without opting for huge celebrations has a delicate beauty in itself. This year, we will have an opportunity to revive that,”

Fr. Nadeeka of Negombo:
“We shouldn’t have a problem of people wanting to celebrate a religious event that has been observed for years now. The responsibility would honestly fall on the leaders of the country to ensure the security of all religious events that would take place, because ultimately, it’s not only the religions or the events. It is humanity that is at stake.”

Archdiocese of Colombo Director Media Father Edmund Thilakaratne
“Celebration is a moment of joy and happiness. Especially religious celebrations; they are celebrations not only of our existence on earth but also of our heavenly existence. Therefore, particularly in crisis situations, it is imperative that all are aware of the limitations in which we celebrate. There are many who are lamenting loved ones and many who are recovering and are hospitalized. Therefore, I believe these are the times, not for external celebrations but one for inculcating the proper, spiritual way of celebrating. I feel that we must celebrate while keeping in mind and taking into consideration the current mind-set of the country’s citizens.”

Fr. Melvin De Silva of the St. Francis of Assisi church
“It has been stated in the bible as well – prosecution is not something new to us, it comes our way when we must take a moment to evaluate the way we have been living. The bible warns us that overindulgence is not ideal. This time of celebration is the time to live a true Christian life. I believe in recent times, people have gone overboard in the name of celebrations – not only Christians but everybody else as well. We’ve been leading superficial lives. We must to look within us and find the purpose of this celebration. Those whom are celebrating Ramadan and Vesak must understand the expectation of the things they do in the name of religious festivities – is it mere ritual or does it enhance spiritual life?
“While it is tragic what has happened and continues to happen, I think these upcoming festivals pose a great opportunity for Buddhists to have a real Vesak, and the same goes for those celebrating Ramadan. We can truly do things right this time. Express true neighbourliness, share goodness and love, and cherish each other, our neighbour. The purpose is not to spill blood of our fellow countrymen, it is to be even more united and witness the beauty of all this diversity we have been blessed with.”

ZamZam Foundation Director of Youth Affairs Umar Yoosuf
“At a time like this, when the entire the country is in crisis, religious practice is incumbent. We, as Muslims, encourage each other to strengthen the relationship with god. It’s also critical when it’s Ramadan because it’s a special month of practice for Muslims. It’s Ramadan now and the crisis has caused the practices to lose its real vibe which is usually celebratory. People are incited with fear of violence; hence, they are forced to observe the rituals from home without moving out a lot. However, Muslims are also advised to tone down their celebrations in solidarity for those who have lost lives in the Easter attacks to respect common humanity.”

August 15, 2018 byJennifer No Comments
A stunning showcase of the skill and creativity of Sri Lanka's young fashion designers, the concluding fashion show of Sri Lanka Design Week 2018 on August 12 was nothing short of a mesmerising

June 18, 2019 bythemorninglk No Comments
Original Source and Supply is an ethical textile brand that focuses on ethically-made, sustainable products inspired by a passion for travel and discovering new crafts