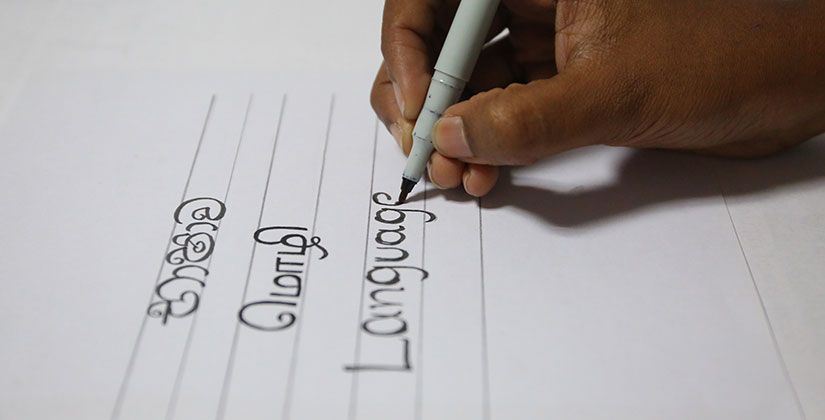 The past week has been the most eventful and eye-opening in terms of fundamental rights, particularly a citizen’s right to use their mother tongue.

A lesser known incident of unwitting discrimination shared by Twitter user Raeesha (@ikram_raisha) who recounted an incident where she said: “At a post office in Kandy, a man comes in with a letter addressed in Tamil and the lady at the post office asked him to go back and write it in Sinhala/English and come. He saw me and recognised me as a Tamil speaker and asked for help.”

Many questions were raised with regard to this incident with some asking “shouldn’t post offices be equipped with at least one trilingual or bilingual speaker given that Tamil is also a national language? I mean, how many people are they going to send back like this?” and some others wondering “I understand that the majority of posts they have to deal with will be in Sinhala since it’s Kandy, but I still think this is quite unfair”.

With regard to the incident, Lisa Fuller, peace and conflict journalist to Washington Post, BBC World News, and National Public Radio stated that “the postal service is bound by the Official Language Policy, meaning that services must be available in Sinhala and Tamil. According to the Department of Posts, officers recruited to the Department of Posts should have trilingual ability. This is a mandatory requirement for all permanent cadres. However, this norm is not observed in practice”.

The fact of the matter is the answer to all of these queries are provided in our Constitution; language rights are fundamental human rights in the 13th Amendment to the Constitution, upheld by other laws and legal instruments of Sri Lanka such as the Official Languages Act of 1956, Extraordinary Gazette 1620/27, and public administration circulars, complemented with a ministry set up (named the Ministry of National Languages and Social Integration) to uphold these values.

However, despite all of these forces of regulation, legislation, and institutions set up to promote the Official Languages Policy, as is with many and all causes, the actual ground situation with regard to language rights and people’s response to it is demonstrably dismal.

The ideal example to best represent the gravity of the issue is the more recent incident where one of Colombo’s newer food and beverage establishments put up a notice which read: “All staff must speak only in English or Sinhala. Strictly no Tamil to be spoken,” and since then, the management has made a number of responses providing that their intentions were not in any way motivated by racism. While that may be the case, and the argument will carry on and die a natural death, what is clear is that there has been a violation of someone’s fundamental rights.

…(name of cafe) is literally the (very polished) tip of the iceberg when it comes to more systemic discrimination practised by employers on workers of Tamil origin, especially in service industry jobs. You know it, I know it. Pretending it doesn’t happen won’t make it go away
Duvindi Illankoon
–
Cafe in Colombo has instructed staff not to speak Tamil. Only English and Sinhala allowed. Justification absurd: there are several other ways to deal with stated issue. Evident management and staff both need training
Roel Raymond, Roar Senior Editor
–
I don’t think the justification is absurd. I have heard many locals say things to foreigners behind their backs and make inappropriate jokes, especially if there is a female foreigner. This seems like to prevent similar situations, nothing less, nothing more!
Charith Amarasekara, chartered accountant and finance consultant

The serious nature of the matter has somewhat missed its mark on most citizens as they focus on non-existent racist agendas. It’s a simple fact that in our country, Tamil is the mother tongue of one in every four Sri Lankans; it is the first language of three ethnic minority communities and according to the Law and Society Trust (LST), a not-for-profit organisation conducting human rights documentation, legal research, and advocacy, while Tamil is predominantly used in the North and East, the majority of Tamil speakers (61%) live in other regions of the island including in urban centres such as Colombo and Kandy and districts such as Nuwara Eliya and Puttalam where their proportion in the local population is considerably higher than the national average.

Through the 13th Amendment to the Constitution in 1987, Tamil has joined Sinhala as an official language and as of the 16th Amendment in 1988, Tamil speakers living anywhere in Sri Lanka have the right of communicating with any government office or officer in their own language and receiving communications too in that language.

Since the aforementioned incident took place, in answer, Minister of National Integration, Official Languages, Social Progress, and Hindu Religious Affairs Mano Ganesan stated: “…a privately owned cafe at No. 76, Wijerama Mawatha, I’m told, displays this notice violating Chapter III Fundamental Rights Clause 12 Right to Equality of the Constitution. I have instructed (the) Official Languages Commission to step in. Violators may have to face legal consequences.”
There have been certain members of the public who believe this to be somewhat of a hypocritical act. International Centre for Ethnic Studies (ICES) researcher Annemari de Silva said: “As deplorable as the (name of cafe) debacle has been, this threat of legal consequences is sickeningly hypocritical. Has the same threat been levelled at police stations in Jaffna and Batticaloa where submissions cannot be made in Tamil? Or in Hatton where government jobs are denied to those who are not Sinhala literate?”

We contacted the government hotline regarding violations and it is a prompt service which functions in such a way that if your grievance is recognised as a language violation, then it will be put forward to the Commission from where a notice would be sent to the perpetrator who then has 14 days to comply and correct their violation policy.

Despite these, outside of the Northern and Eastern Provinces, Tamil speakers continue to be discriminated against in their access to justice, administration, information, education, etc. and while the linguistic majority take most of these services for granted, another sector that speaks an official language of the country has their rights systematically violated.

Fundamental Rights – Chapter III of the Constitution of Sri Lanka

12. (1) All persons are equal before the law and are entitled to the equal protection of the law.

(3) No person shall, on the grounds of race, religion, language, caste, sex, or any one of such grounds, be subject to any disability, liability, restriction, or condition with regard to access to shops, public restaurants, hotels, places of public entertainment, and places of public worship of his own religion.

Language – Chapter IV of the Constitution of Sri Lanka

18. (1) The official language of Sri Lanka shall be Sinhala.

(2) Tamil shall also be an official language.

(3) English shall be the link language.

19. The national languages of Sri Lanka shall be Sinhala and Tamil.

(2) In any area where Sinhala is used as the language of administration, a person other than an official acting in his official capacity shall be entitled:

(c) where a document is executed by any official for the purpose of being issued to him to obtain such document or a translation thereof, in either Tamil or English

Going against the whole grain

January 12, 2020 bythemorninglk No Comments
‘Pizza Bakery’ at One Galle Face