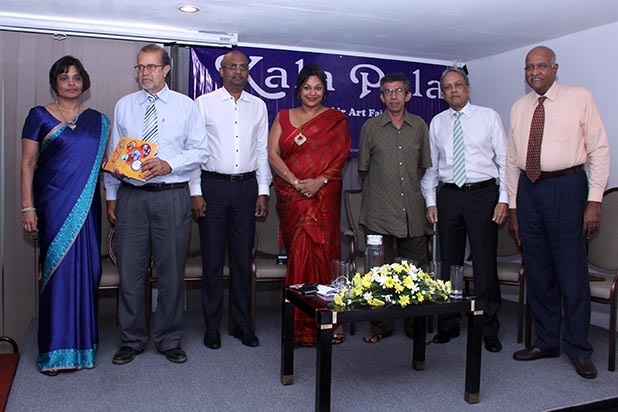 The art of Sri Lanka resurfaced

February 18, 2020 by Bernadine Rodrigo No Comments

Sri Lanka has been an artistic nation since early civilisations, with paintings in temples and other cultural sites – such as the frescoes in Sigiriya – still being immensely popular attractions. While art in Sri Lanka is greatly appreciated when it comes to historical monuments, in the contemporary era, it can be agreed that people still look at the pursuit of art as a hobby rather than a career. Moreover, while the popularity of art is rising at present, it is questionable if it is enjoyed at the same scale of some of the other forms of art such as music, dance, literature, and theatre.

Hence, there have been many attempts made towards the upliftment of art in Sri Lanka. One such attempt is “Kala Pola”, the longest lasting annual art exhibition in the country.

Kala Pola was inaugurated in 1993 – that is 27 years ago to be exact – in honour of one of Sri Lanka’s most passionate and renowned artists, George Keyt. Born in 1901 to a family that settled in Kandy, Keyt came to use all the things he saw around him growing up, in regard to the local culture, as a means of expression through art. His art is specifically, largely propagated around the female image, which is romanticised and praised in the culture of Sri Lanka. If one were to compare Keyt’s art to something such as the paintings found in Sigiriya, while the hues used are rarely similar amongst the two, there is somewhat of a relationship one could draw.

Indeed, Keyt’s work may be described as a 20th-Century reflection or an abstract version of the “Apsaras” of the Sigiriya walls. While the bodies of these figures are often largely curved, gathering at the waist as though held in by a girdle, the faces of the ladies painted by Keyt consist of strong, eye-catching features that can be considered key features found amongst those in the South Asian region.

Of influence
Kala Pola is presented by the George Keyt Foundation in association with John Keells Holdings PLC. According to the organisers, Keyt had been extremely fond of not just the Sri Lankan culture he was exposed to, but also to that of India which he had the privilege to visit after his career took off in the mainstream. Whichever culture it may be, “culture” is indeed something largely portrayed through the artworks of Keyt; the element of ethnicity is most evident, especially with the round but also angular shapes used by him as well as the thick, steady, and dark colours used in most of them.

Nevertheless, in one angle, they reflect influence of popular western artists, especially those like Picasso, as a result of the abstract structure adapted by artwork. Another factor reflected through the works is the passion within the painter, whose paintings, when not depicting figures of females, often depict images of lovers engaged in deep romantic passions. Keyt’s personal life seems to have followed this passionate course of his as he had to marry thrice to find the woman he would spend the rest of his life with. Happily for our artist, the third time was indeed the charm.

Apart from this rather rocky romantic life, his school career at Trinity College in Kandy too was no less a bumpy ride. It was not that young Keyt didn’t have the means of continuing his school career, nor was it that he lacked the mental capacity to do so, but he simply did not want to. At the age of 16, due to his adamancy in wanting to do so, he stopped going to school. But fortunately for the young brain, then Principal of Trinity College Rev. Fraser encouraged him to make the best use he could out of the school library at his leisure, and Keyt fulfilled this to his utmost capability. At the same time, his attention was caught by the Malwatte Temple of Kandy where again he voluntarily was educated in the Buddhist culture by Ven. Pinnawala Dhirananda Thera. With this deep knowledge, Keyt was even able to translate scripts of Pali into English and also write about local cultural art. This level intelligence of can be witnessed in his art too, especially with the strong colours he had always been so fond of using.

Intelligence, it seems, is a common factor found amongst many artists. Even in Sri Lanka, such intelligence was reflected by artist Channa Ekanayake at the Kala Pola press conference held earlier this week. Ekanayake is a well-known artist in Sri Lanka, who if judged by his art would seem to be someone well educated in the field since schooling. However, as he shared his story, he mentioned that he was actually studied in the field of science on which he had completely focused during his Advanced Level (A/L).

Unfortunately for him, excelling in science did not get him where he wanted to be in university – the faculty of arts. He highlighted this point, speaking to the media, saying that it is most unfortunate that the scope allowed in the Sri Lankan education system is extremely limited. He believes there must be change in the education system where students would be able to select the path they wanted when they felt like it, without being restricted by the subjects they chose to study in the past. The mind must wander free, he believes.

While Ekanayake represented all the artists who will be present at the Kala Pola this year, which will begin on 23 February down Ananda Coomaraswamy Mawatha, George Keyt Foundation Chairman Michael Anthonisz was also present and received the catalogue for this year’s exhibition. Also present from the foundation was Trustee Abbas Esufally, who expressed his excitement for this year’s Kala Pola and hopes it will put Sri Lanka on the artistic map, thereby attracting more popularity to the country, especially in terms of tourism.

John Keells Holdings Head of CSR Nadija Tambiah too focused on the tourism aspect of Sri Lankan art and raised the concern that art – even that on canvas – must be preserved with utmost care. Speaking to The Sunday Morning Brunch, she mentioned that art, no matter which medium, will be subject to wear and tear especially in Sri Lanka.

She says that according to her knowledge, which she is doing all she can to improve, the environmental conditions of Sri Lanka, such as humidity, are affecting the quality of the paintings. “We have begun to lose our art to natural causes,” she said, adding: “We already have scientific methods of preserving historical art, but we still don’t know anything about that of contemporary art.”

She hopes that through events such as Kala Pola, John Keells Holdings and the George Keyt Foundation would be able to figure out a way to preserve modern art of our country and keep them here forever, consequently increasing the importance of the country as an aesthetic gold mine and attracting all kinds of tourists, especially those who look for “authenticity”, as Esufally says.

Cinnamon Hotels and Resorts Head of Brand and Marketing and Cinnamon Life Mall Chief Executive Officer Dileep Mudadeniya also expressed his excitement towards the event in which John Keells would be entering the 26th year of this partnership. Event moderator Arun Dias-Bandaranaike is a Trustee of the Gorge Keyt Foundation.

Looking at the success of the previous years, it is certain that Kala Pola 2020 would attract large groups of onlookers as well as artists who come not only from Colombo, but from around the country. Indeed, so far almost 80% of participants have been those from outside Colombo, thus showing that Kala Pola truly is a national event that brings the entire country together.