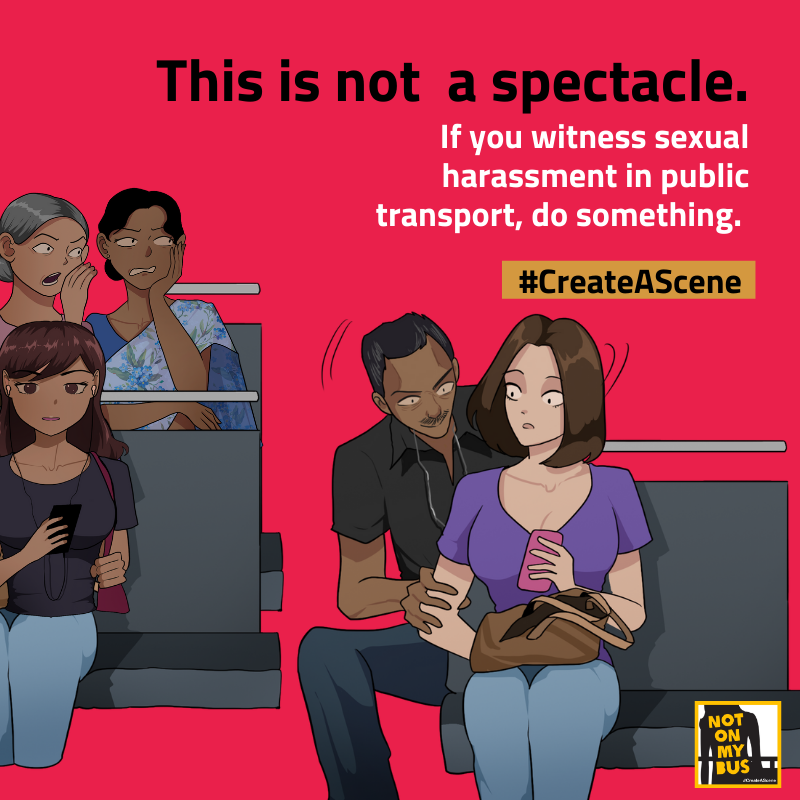 February 23, 2020 by Bernadine Rodrigo No Comments

The campaign is a country-level adaptation of Oxfam International’s global “Enough” campaign which aims at challenging social norms that perpetuate violence against women and girls as well as gender inequality. While Oxfam is an international organisation that concentrates on various other issues in regard to the protection and justice of women and girls, their gender and advocacy team in Sri Lanka brings the issue of harassment on public transport to the spotlight as it is of utmost importance to both men and women who need to go about their daily activities. Women and girls in particular are subjected added distress due to sexual harassment.

The Not on My Bus campaign wishes to diminish the discomfort and stress faced by Sri Lankan women by not just asking them to stand up for themselves, but also by imploring those round to “create a scene” – there’s a good enough reason for it – and come to the aid of women and girls who are often helpless due to the lack of support.

The campaign began in early 2019. A study carried out in this regard showed how bystanders are often willing to help a girl or woman harassed in public. However, to the disappointment of many, the results also showed that they would barely ever come to render such help. They staged scenes on buses where a hired actress would pretend to cause a scene after being sexually harassed, and shockingly, what resulted was that most people simply hushed the actress and told her to quiet down instead of causing inconvenience to the rest of the passengers.

While this is what the campaigners saw at the beginning of last year, they are hopeful that time has changed the people of this country, and not only do women keep getting bolder but also those around keep rising to support them. “There is an evident increase in women and girls coming out with their stories – we have come a reasonable distance in breaking the silence, challenging the norm of accepting this as a common thing; a woman’s clothes, time, or mode of travel should not in any way be a contributing factor for harassment,” they said.

According to the campaign, intervening into a situation of harassment does not simply mean lodging a complaint with the Police in hopes that the authorities will take care of it and the individual has nothing to do about it. While this is a legitimate method of taking some action, in countries such as Sri Lanka, it is often a futile task and, after all these years, nothing has come of it. In light of this, the campaign provides a seven-step method for bystanders to be a part of maintaining justice:
1. Be seen: Make your presence known and move closer to the harasser.
2. Distract: Engage with the harasser to create a distraction from what they’re doing – ask the time or a casual question.
3. Engage: Engage with the harasser. This can be done in groups or individually. Ask/say things like “what are you doing?”, “leave her alone!”, “we will report you”, etc.
4. Speak up: Speak loudly about the consequences of sexual harassment directed at the harasser. “Sexual harassment on public transport is punishable by law.”
5. Notice details: Gather evidence if needed, such as bus number, route, what the perpetrator was wearing, time, etc.
6. Report: File a complaint about the incident with the closest authority figure such as the bus conductor, police officer, police station, etc.
7. Support: Offer assistance to the victim afterwards. Respect the victim’s right to privacy.

The Oxfam gender and advocacy team believes that awareness is in fact being spread largely at present, especially through social media platforms. They are happy to say that the level of awareness is increasingly propagated by a male population which is reliving thing to know.

They said the circulation of messages did not decrease even due to the effects of last year’s presidential election campaigns. While this is truly encouraging to know, we must always be aware that circulation of posts on Instagram and Facebook does not mean the problem will disappear, which is why the Not On My Bus campaign tries as must as possible to expose harassers through media so that they can be recognised and brought to the book or punished as appropriate by law. The necessary governmental authorities have given their consent and support for the conduction of the campaign and have promised to do all they can in their power to reduce this menace faced by the women and girls of Sri Lanka on public transport.

An interesting strategy
In an attempt to raise more awareness and increase public involvement, the “Not On My Bus” campaign plans to screen a short film on 25 February at the National Film Corporation theatre. The short film will be selected out of many submitted to a special competition. Anyone aged 16 or above was asked to send in short video clips spanning from 30 to 90 seconds, recorded on any device, which portray an impactful message about the great misfortune between women on public transport. Three winners will be selected under the categories of Best Intervention, Most Powerful Message, and Most Inclusive Video.
In addition, merit awards will also be given to selected entries. The more hopeful news is the assurance from the National Transport Commission that they are keen on playing the winning entries on digital screens set up in buses and bus depots.

October 23, 2019 byThe Sunday Morning No Comments
In 1974, Giritale Hotel was the very first hotel in the Giritale area, located in close proximity to the Somawathiya Stupa, the ancient ruins of Polonnaruwa, all part of our island’s rich iconic

October 17, 2019 byThe Sunday Morning No Comments
Lyawal by Roshelle offers its patrons a variety of tote bags and pouches and caters to “almost all your packing needs with cotton fabrics”.