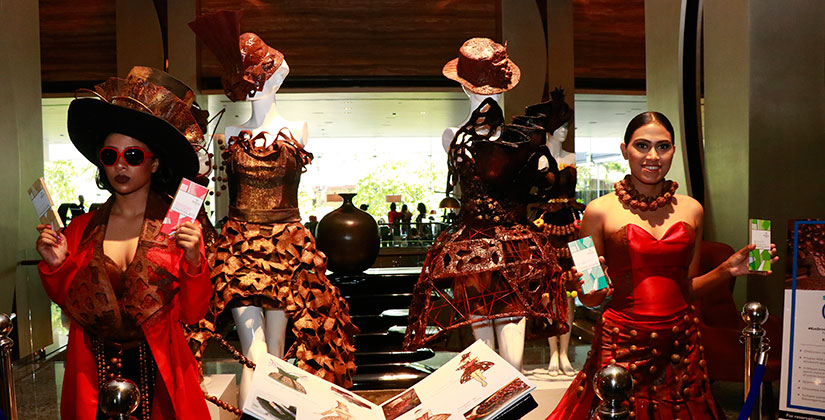 Hilton’s seasonal produce for the month of August happens to be chocolate! It would seem that everyone is excited about this month’s selection, considering how the restaurant’s staff were buzzing about how fun and exciting it is.

Hilton hosted a high tea at L.A.B. – the restaurant’s lounge and bar – on 7 August from 3 p.m. to 6 p.m. in order to introduce their new seasonal produce.

Adopting a Charlie and the Chocolate Factory-like theme, the place was decorated in such a way that it appeared to be adorned in chocolate; the highlight being of course the mannequins dressed in dresses made of chocolate. To celebrate chocolate and its many splendours, Hilton collaborated with Mod’Art International. The fashion school presented these fabulous 70% fabric and 30% chocolate-infused dresses.

There were also chocolate slabs available for purchase with an added bonus opportunity – amongst the many slabs, some were said to contain a golden ticket! If you are the lucky recipient of said golden ticket, you will be awarded a year’s supply of chocolate courtesy of Hilton; this includes two 12-piece boxes each month for an entire year.

While the high tea, which was priced at Rs. 2,500 Nett, was only for this one evening, Hilton’s resident bodies L.A.B., Graze Kitchen, and Café Kai will feature multiple chocolate-infused dishes throughout the month.

The high tea featured a selection of curated specialty items in the buffet. The savouries were truly intriguing, with the inclusion of chocolate corn dogs, leek chicken, and chocolate pies which were all satisfactory. The dark chocolate and chipped, rubbed, and smoked pork belly with chocolate BBQ sauce was the most delicious dish we’ve ever had. Strangely enough, while the pork stood out easily as it featured chocolate heavily, it surpassed the other savouries which were conservative with their chocolate.

There were also other questionable options – as we aren’t too used to mixing up chocolate with savoury items – which all surprisingly ended up being quite pleasant; the devilled egg mini sandwich with chocolate mayonnaise, smoked chicken mini sandwich with wasabi cream in a dark chocolate loaf, mini chocolate bagel cream cheese cucumber and quail eggs, and last but not least, the white chocolate baba ganoush.

The desserts, while lovely weren’t as exciting. However, there were some interesting desserts like the mango carmelito, which was delightful. In addition to that, all that we can say is – it was chocolate. You needn’t say more, as it’s perfect as it is.

In keeping with the Charlie and the Chocolate Factory motif, the event also featured steampunk-style female Willy Wonka demonstrating the benefits chocolate has on your skin using chocolate scrubs. We through this was an interesting find and upon trying it, we were pretty convinced; it leaves your skin soft, moisturised, and smelling amazing.

Boys will be boys?

January 20, 2019 bythemorninglk No Comments
The 21st century, the day and age of the millennial's, renewed energy on feminism and campaigns that flood the streets of western societies.