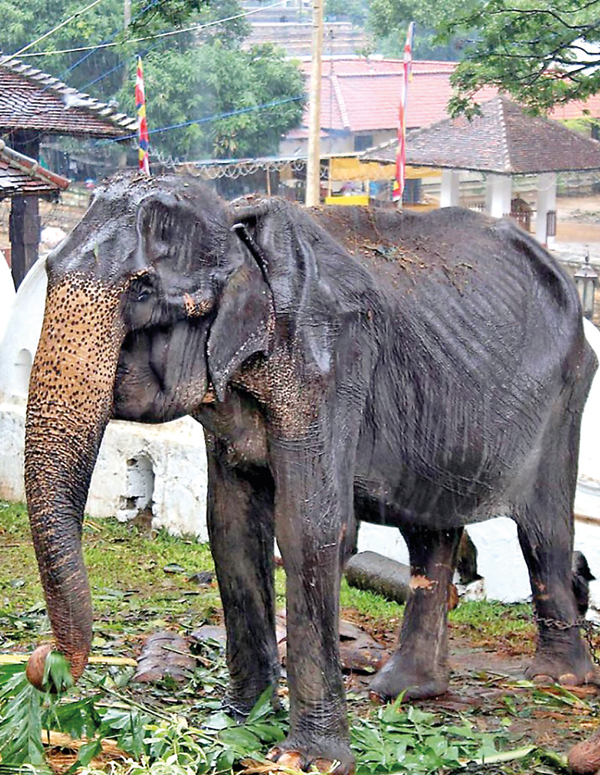 The long-spun relationship between humans and elephants, wild or tame, evinces how these creatures have been intertwined with our culture and way of life. This age-old practice with rich historical importance could be dated back to as far as the 6th Century BC. “To begin with, when Queen Mahamaya was to conceive Prince Siddhartha, King Suddhodana transported her to her hometown. This particular procession took its course with the ceremonial tusker on the lead,” asserted Pradeep Miyanapalawa, the official in charge of elephants at the Dalada Maligawa. Looking towards ancient Sri Lanka, elephants were seen to have been included at numerous occasions, such as the Wap Magul Uthsawaya and all other ceremonies headed by the king pertaining to the kingdom and state. Elephants were also used to assist in the irrigation of tanks, canals, and even pagodas such as the Lovamahapaya. In addition to this, the service rendered by elephants even spread to the area of security; protection to the king was provided by these mighty beasts and were, during the time, considered chief guardians and protectors of the Sacred Tooth Relic.

Peraheras are a cultural event with immense cultural value; not only does it qualify as a remarkable spectacle, but it’s also grown to become a part of our identity. Interestingly, it’s been made complete with the inclusion of tame elephants in its proceedings. To begin with, elephants could be either tame or wild, and the former are those with owners or domesticated elephants posing no immediate threat.

Tikiri became the talk of the town over the past few weeks.

The painstaking image of the 70-year-old elephant appearing to be emaciated in form flooded social media was seen in abundance; so much so that it was even featured in news platforms internationally too. Ill treatment of the animal being the immediate conclusion the masses came to when glancing the animal, it wasn’t until long that it was revealed that the elephant was suffering from a digestive medical condition which affected its overall health and physical appearance. The next question immediately shot by the masses was: “Why let an elephant of this nature partake in peraheras?”

When journeying to find answers to this question, it was revealed that the elephant was in fact in the process of fulfilling a vow in order to obtain blessings following its ailment. Conversing with Miyanapalawa, it became clear that whilst Tikiri is one of the oldest surviving elephants of Sri Lanka, wild elephants do not live over a certain age. “Because they don’t have proper care, they die a natural death and live up to around 50 years,” he said. The last recorded date of a female tusker participating in the temple’s procession was in 2001, of a 98-year-old female tusker who had apparently displayed characteristics similar to Tikiri.

Our scrutiny of the connection between vows and this majestic creature led us into a pool of questions; can an elephant ever be tame enough to walk through masses of people? And what has a vow got to do with elephant participation?

A vow is a pledge of sorts, although what we refer to here is culminated within the Sri Lankan culture. Individuals would visit a temple (devale) built in the name of a particular deity and would make offerings in exchange for wealth and health. The annual Esala Perahera conducted by the Dalada Maligawa in Kandy receives a wealth of elephants offered by the elephants’ respective owners from around the country.

As part of tradition, owners of tame elephants make vows to their local deities (Gam bhara deviyo) that their elephants would walk in peraheras for as long as long as they own them. In addition to this, they vow that in the event of an ailment, upon recovery, the elephant will be brought back to the devale in order to receive blessings and to complete the offering.

Miyanapalawa continued: “More than us choosing elephants, elephants are presented to us by owners. And this is an age-old practice which has thrived for many years. In prominent peraheras such as Maligawe Perahera, Saman Dewala Perahera, and Katharagama Perahera, elephants are voluntarily introduced by their owners.”

As indicated by Miyanapalawa, how tame the elephant is as well as its experience participating in peraheras are factors taken into account when deciding on the suitability of an elephant to partake in a Maliga Perahera (procession at the temple of the Sacred Tooth Relic).

As observed by Miyanapalawa, despite the age-old practice, most individuals appear to be rather skeptical over the use of elephants in processions. They’re often constrained or chained and some may view this as animal cruelty.

Guruvayur Kovil in India is said to have around 67 tuskers whilst in Myanmar, the tame elephant population is said to range between a striking 5,000-6,000. Sri Lanka, on the other hand, only has around 113 tame elephants and tuskers.

Speaking of the manner in which elephants are constrained, he indicated that in a population of around 6,000 tame elephants, only 1,000 could be transported whilst unchained.

“Sri Lanka has only 113 tame elephants, out of which only 30 could move free of being constrained.” During the years of 1994-1998, when the tame elephant population remained between 250-300, the Maligawa was able to scrutinise them well enough and then decide on using the most tame elephants that required no constraints. With the reduction of its population, and around 60-70 elephants registered to take part in the temple’s annual processions, changes in the aforementioned occasion are inevitable. Despite their tame nature, not every elephant is fit to walk in processions, regardless of whether they’re old or young.

July 16, 2020 byNaveed Rozais No Comments
A look at the new organisation that is effecting change for SL entrepreneurs

November 5, 2019 bythemorninglk No Comments
Mindfulness, Yoga, and healthy living have been all the rage as of recent times, and while these practices are certainly nothing new, they’re definitely being given the spotlight they undoubtedly dese