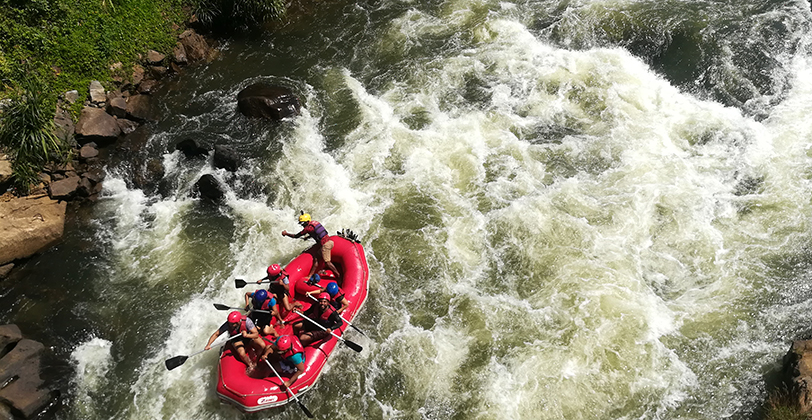 Last chance to enjoy the rapids?

January 5, 2020 by Dimithri Wijesinghe No Comments

This past weekend, we finally went white-water rafting. Considering it was vacation time and having squirreled away a few days off work, we decided to head on over to the famous rapids in Kitulgala.

We decided to take the bus to Kitulgala as it’s only about three hours maximum and considering that it was vacation time, with most people cosily settled in their homes, there really wasn’t a soul on the road, so we arrived at our destination in record time.

Before taking our trip we asked around about how best to utilise our time at Kitulgala and since everyone and their mother had already gone white-water rafting, there was no shortage of advice.

The one thing we were told was that you don’t have to book anything in advance, there are plenty of outlets who conduct rafting and you can simply go there and take your pick of whom you want to raft with.

It turned out that this was accurate. However, we still met with a group called Rafting Team 39. We spoke to its owner Ravi Jayaratne, who is a member of the Sri Lanka Rafting Association, and Team 39 also happens to be the only establishment with a Tourist Board-approved operation.

Speaking to Ravi, we managed to get ourselves a sweet little package for our water sports/adventure excursions at Kitulgala for the day.

River boarding is a newly introduced excursion which is more adventurous and daring than the others and many tourists were most keen to do this.

As we were not tourists, we decided to stick with plain old white-water rafting and also another activity which they guaranteed could be done within an hour and a half – canyoning – which costs Rs. 1,500 per person and is essentially a guided trek, rock/stream sliding, and confidence jump; the latter of which is jumping into various bodies of water of varying depths from varying heights.

Ravi shared with us that rafting is mostly one of those spur of the moment decisions people make to and from Hatton, either on their way to Colombo or the South. Kitulgala is just on the way and when people hear the excited yelling made by those who are engaged in the sport and see the various spots offering adventure sports packages, they make their decision then and there.

However, Ravi said that while it is currently a thriving tourist attraction, with the majority of the locals benefitting from it, come 2020, things are set to change drastically for them.

The reason being the Broadlands Dam which is set to be completed this year; this Broadlands Hydropower project is expected to add 126GWh of electrical energy annually to the national grid. While it is clean and has renewable energy generating 35 MW of hydropower, this will come at the expense of two of Kelani River’s two main tributes which will affect the majority of the rapids that are utilised for the thriving adventure sport industry in Kitulgala.

Speaking to some of the more experienced foreigners there to try out rafting in Sri Lanka, they said that it is a shame that the operation here will have to close down. We spoke to a visitor there named Russell, a Global Fund employee, spending his holiday backpacking around the island before he headed home to Australia, and he said: “I’ve rafted in various parts of the world, but this setup is pretty ideal for beginners and safe family entertainment. There are no crazy hazardous rapids and it’s perfect for a light thrill.” He added: “Maybe it would be good for the locals to arrive at a compromise with the authorities.”
A compromise has been suggested by the Ceylon Electricity Board who said that they have proposed to let water out periodically, with the Board proposing to release water from the dam during the day so that water sports could continue, but at night a section of the river will go dry. Broadlands project project leader Kamal Laksiri shared: “We will lose some energy but we are willing to do that as it will contribute to the sustainable model of development we hope to achieve.”

However, Ravi and also Sumudu, another guide on site, shared that while this compromise had been proposed they have not received any official statement in writing and so they are doubtful of it being executed, with Ravi adding that they have no choice but to agree to the said compromise and as they themselves do not carry out any night expeditions, they are not effected and would be more than happy to continue if they are presented with legal approval.

In Sri Lanka, tourism is the third-largest export earner in the economy and prior to the Easter Sunday attacks of 2019, the country had experienced an unprecedented growth in the industry. However it is a widely accepted fact that tourism in Sri Lanka has much more untapped potential. The locals doing their best in Kitulgala and the rest of us islanders are hopeful that the changes in policy for the future would reflect positive change to better leverage the economic prospects of the travel and tourism industry.

April 10, 2019 bythemorninglk No Comments
Greetings to all you sizzling hot people of the sun-baked isle! I’m sorry, I don’t mean to be wicked but really, are we not?

Bumblebee – A sigh of relief for Transformers fans of yore

January 13, 2019 bythemorninglk No Comments
Director Travis Knight’s film about the fan-favourite yellow Autobot – Bumblebee, is a relatively simple story about a girl and her friend, who just so happens to be a rebel robot.