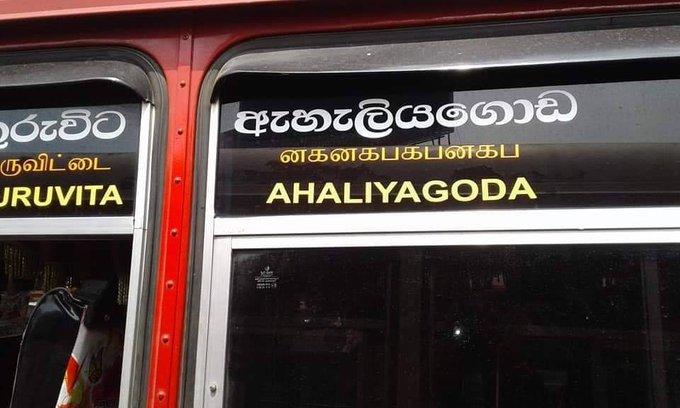 Passing the buck on bus lettering?

Recently, a topic of discussion was brought to light concerning the stickers on buses and bus windows indicating the route the buses take.

A picture of a red bus – assumed to be a public, Sri Lanka Transport Board (SLTB) bus – circulated on social media, showing the window signs of the cities (stops) in all three languages, and the Tamil language translation was incorrect; it looked not as though it was simply a careless mistake, but rather as if it was written with zero concern for its accuracy.

While the lettering in question – Eheliyagoda/ඇහැලියගොඩ – has been indicated in Sinhala and English correctly (although the English word has made a minor spelling mistake), the Tamil version which should be “எகலியகொட” (Ekaliyakota) was instead written as a completely nonsensical word that read as “nakanakapakapanakapa”.

There were many Lankans who expressed their disappointment over the news with regard to the distortion. Attorney-at-Law Antoinette George observed: “As a Tamil and a person who speaks all three languages, it’s sad to say these things don’t surprise me anymore. This is Sri Lanka and if that’s a CTB bus, then there is a concern. Yes, of course it is infuriating to see how a language has been butchered, but our country, as we have seen in the past few months, is moving backwards and the Tamil language is not given any recognition. I don’t think anything will change for a really long time. (It’s) really sad, but not surprising.”

Also sharing her thoughts, legal apprentice and human rights activist Theruni Ranatunga said: “I think the authorities should stop passing the buck when it comes to who is responsible in problems such as this. It is a critical issue, especially if things like road signs are distorted. If the writing was in Sinhala and it was misspelled, then there would be uproar about it. By not taking this issue as a legitimate concern, you are normalising it and we won’t feel the gravity of the situation. There is an entire community affected by it and are expecting a solution. We can’t afford to make such mistakes and treat it in such a Laissez-faire manner as it is likely to fuel unnecessary tension.”

The Official Languages Policy of Sri Lanka, according to Chapter IV of the Constitution, provides that “Sinhala and Tamil are both official and national languages” of the country while English is the “link language”. Therefore, to not feature one of the two official languages is considered a violation of the said policy.

It is common practice in terms of public transport for buses to indicate the cities they pass through in its rotation, in order, on its windows, and as per the Official Languages Policy implemented by the Ministry of National Languages and Social Integration in 2011, these name boards must be trilingual – in Sinhala, Tamil, and English.

When the situation first came to light, we contacted the SLTB in order to figure out who is to be held accountable for such drastic errors. Our initial contact was with SLTB Deputy General Manager – Operations R.T. Chandrasiri, who provided that, while the trilingual policy is something the SLTB implements stringently, they have in fact come across such complaints. However, he said they take immediate action when such complaints are made and inform the relevant regional managers who then have to correct the errors.

Chandrasiri also said that in curating the appropriate translations for the name boards, they call upon the aid of government translators.

Speaking of SLTB’s dedication to ensuring the proper implementation of the Official Languages Policy, the Deputy General Manager also provided that the SLTB takes great pride in carrying out the trilingual policy and that they have even won an award for best practices in implementing the said policy courtesy of the Department of Official Languages.

However, with regard to this particular incident, Chandrasiri provided that the bus in question is not a SLTB bus as the route indicated on the photograph is not a route employed by the SLTB. The same was confirmed by Sabaragamuwa Regional Manager Alahakoon, to whom Chandrasiri directed us after providing his comments; he said the regional manager would be the person to handle the matter.

Alahakoon confirmed that the only buses that run a similar route to that of the picture are Ratnapura-Kuruvita or Ratnapura-Eheliyagoda, and therefore this is not a SLTB bus. However, he said that while they have not had complaints about such distortions in language as of late, there have been in the past, and that they’ve taken immediate measures to correct these infractions.

He further said there is a quality control in place at all 107 bus depots situated in all 12 administrative regions of the SLTB around the island, where an official calligrapher is employed to write the signs and the translations are strictly acquired by government translators.

Despite the measures in place, if a mistake was to take place, the matter would be resolved as soon as possible, assured Alahakoon, who then provided that any complaints received are taken very seriously and immediate action would be taken to make all necessary changes. He went on to state that while it is in fact a public concern, the public too should take care to confirm facts before accusing government institutions of being lax in their duties and responsibilities.

For further clarification, Alahakoon directed us to Sabaragamuwa Regional Manager – Engineering Jayawardene. He directly handles the calligraphers and translators who provide the correct wording and he too said that it is unlikely that a mistake is to happen at present as they take great care to ensure such distortions do not make it past their watch.

What do private bus operators say?

Wijeratne shared that the stickers they place on their “destination boards” and also on the windows indicating the route are provided by the SLTB. Therefore, he stated that all private buses running with a permit would carry this official lettering that they purchased from the SLTB.

If this is the case, where did this abhorrent distortion of language come from? According to Wijeratne, there is currently an issue where there are buses on the road operating without permits and they are not part of the LPBOA. He added that if such mistakes can be seen, they are likely attributed to those permit-less buses.

It seems that there are many fingers pointed in all directions, without no responsibility being assumed and no real culprit coming forward, if only to correct one’s mistake.

When it comes to sensitive issues such as correctly carrying out the Official Languages Policy of the country, we are inclined to assume it should not be handled in such a Laissez-faire manner. Nevertheless, the reality seems far from ideal.