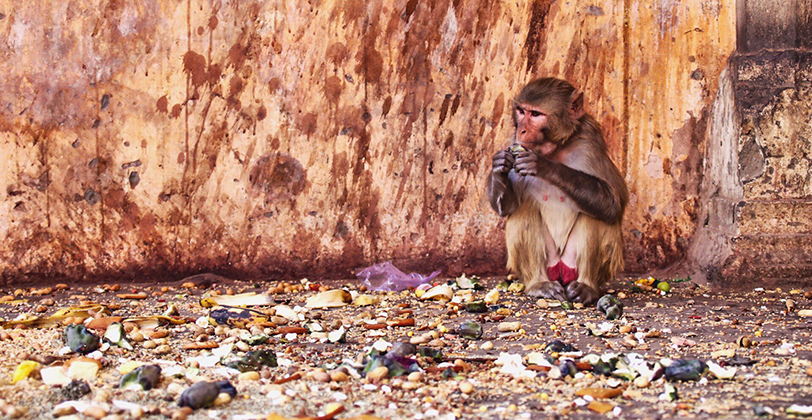 Public Perception and Solutions to Human-Monkey Conflict in Sri Lanka 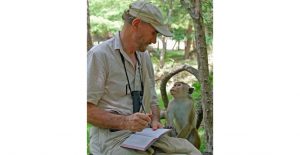 Monkeys – some find them adorable and some a menace. The Human-Monkey Conflict (HMC) is very new to most of us, but is definitely a pressing problem that’s existed for many years. The Primate Project has been in active in Sri Lanka for over 50 years now, and is entirely dedicated to studying monkeys. Based in Polonnaruwa, they are known locally as the “Monkey Camp”. We spoke to Dr. Wolfgang Dittus, who has been part of this great institution since its origin in Sri Lanka.

Dr. Dittus received his undergraduate training and experience in geology through McGill University and International Nickel Company (INCO) in Canada.

He switched disciplines to biology for his graduate work, and his graduate education at McGill gave him a foundation in the fields of physiological psychology, behaviour, and zoology. In the US, he graduated with a PhD in Zoology (Behaviour and Ecology) from the University of Maryland, College Park based on his field research of toque macaques in Sri Lanka. He is also the Chairman of the Association for the Conservation of Primate Diversity (ACPD) and is a Research Associate at the Smithsonian Conservation Biology Institute, Conservation Ecology Centre, Washington DC, US. He is also a Visiting Research Professor at the National Institute of Fundamental Studies in Sri Lanka (NIFS).

How did you make your way to Sri Lanka? 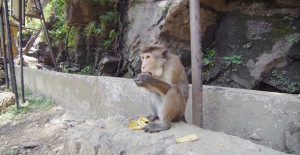 “I came to Sri Lanka on invitation by the Government of Ceylon as a member of a team of scientists and students from the Smithsonian Institution as part of the ‘Biological Programme in Ceylon, 1965-1972’. At that time, the Government wanted a survey of elephants, plants, and other biota. I was a member of the team that studied the primates. I continued with the primate research from 1968 to the present day.”

Why did you pick monkeys as your subject?
“Monkeys were selected because of my interest in the evolution of social behaviour and communication in primates.”

Most activities by the Smithsonian Conservation Biology Institute ceased in Sri Lanka with the exhaustion of funding by 1972. However, the Primate Project continued its work with the help of grants from the US, Germany, Earthwatch, and other loyal agencies to Dr. Wolfgang Dittus.

The Primate Biology Programme was initially administratively sponsored in Sri Lanka by the University of Peradeniya (1977-1983), after which by the National Institute of Fundamental Studies (since 1983).

Over 50 years, their studies have been ongoing at the Polonnaruwa Nature Sanctuary and Archaeological Reserve, in the Dry Zone of Sri Lanka. They study the four different primate species in their habitat: toque macaque, hanuman langur, purple-faced langur, and slender loris.

Along with two other colleagues – Sunil Gunathilake and Melissa Felder – Dr. Dittus published a study titled, “Assessing Public Perceptions and Solutions to Human-Monkey Conflict from 50 Years in Sri Lanka” early this year.

“We surveyed and evaluated the attitudes of rural residents towards these four species in an effort to contribute to an ethnoprimatological approach to conservation, i.e. to promote co-existence and sharing of habitat between humans and monkeys. We selected 13 villages near Polonnaruwa, located centrally in the Dry Zone. The four nonhuman primate species differ in their behavioural ecologies, and this influenced how frequently they were thought of as pests.

“Most HMC was with the macaque and gray langur, less with the purple-faced langur, and least with the loris. The underlying sentiment among stakeholders towards monkeys was generally either neutral or positive.

“Nonetheless, the majority (80%) of people desired a translocation of the troublesome monkeys from their properties to protected areas, which is impractical. Few (1%) openly wanted monkeys destroyed,” he explained.

Some key highlights and findings of the study 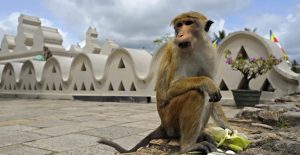 · Public understanding of the underlying causes of HMC was poor, hindering effective solutions. A combination of a feeding ban, possibly contraceptive intervention at localised HMC trouble spots, and extensive education may be the only benign alternatives to the destruction of wild primates by a powerful minority. Co-existence through strengthening and expansion of exclusive suitable protected habitats for all wildlife is a priority.

· Human expansion into natural habitats worldwide has been the root of an increase in conflict between wildlife and humans. Natural food sources for wildlife are destroyed and replaced by more abundant anthropogenic ones. Wildlife that feeds on such produce is then considered a pest.

· With regard to negative impacts, about half of the reports indicated loss of crops or kitchen foods, followed by material loss such as roof tiles and clothes hung out for drying. Roof tiles or sheets were damaged mostly when the large-bodied (10-15 kg) gray langurs leaped onto roofs from the branches of high trees during travel or when macaques removed tiles when foraging for insects.

· People’s attitude toward monkeys was influenced by how frequently the animals visited their properties. Those who had no strong opinion about monkeys were also the least frequently visited by them. Households that were visited on a daily basis also had the highest proportion of individuals who expressed a liking for monkeys.

· People (231 responses) defended themselves against monkeys in a variety – and through a combination – of actions. The method used most often involved throwing stones or using a catapult (30%), shouting or throwing a firecracker (54%), or encouraging their dogs to chase monkeys (9%). Only about 1% did nothing or tolerated the monkeys. Only about one-third of respondents had complained to the government authorities with regard to HMC.

· It was widely appreciated that habitat loss leads to HMC. Nonetheless, people identified the cause of HMC simply as the fault of misbehaving monkeys and advocated their removal. In the absence of crops, as in larger towns, the magnet that drew monkeys to human properties and led to HMC was the ubiquitous sources of food refuse and water that were easily accessible by monkeys. The public neither perceived nor willingly acknowledged this cause even when made aware of it.

· The solution to resolving HMC lies not so much in getting rid of monkeys, but in not attracting them to human habitation in the first place. This is a challenge to conservation activists because it requires a change in human habits, traditional ingrained ways of thinking, and the expenditure of public and private resources.

· The sharing of habitat and co-existence is possible in modern times, if correctly orchestrated. By way of an example, for more than 50 years, the forests surrounding the Smithsonian Institution Primate Research Station at Polonnaruwa has been inhabited by two or more groups of monkeys. Some macaques are inveterate raiders in the surrounding village neighbourhood, but when the same groups visit the station premises, they find access points to food and refuse screened off. Apart from occasional attempts, macaques have learned that raids are unproductive and may lead to punishment (chasing). They rest, groom, play, socialise, fight, and sleep in the tress and on the roofs but have learned not to waste their energies in raiding attempts.

· The intelligence of monkeys can favour co-existence with humans, or not. The challenge lies in teaching not only humans but also nonhuman primates how to share habitat.

· Human sympathy towards nonhuman primates might be most productively used to support the strengthening of exclusive protected nature reserves for all wildlife, with habitat-sharing as a secondary and supplemental option.

The HMC has not been highlighted so much, in comparison to threats to elephants, whales, etc. We asked Dr. Dittus for a possible reason behind this.

Elephants, he explained, have always been part and parcel of Sri Lanka’s culture and history. They are large animals and can kill people; they get a lot of media attention.

“Primates don’t get much attention. Although the HMC has always been existent, it was under control by village folks throughout history.”

He further explained that in recent times, specifically the last 30 years, tourism, the conversion of forest lands to home gardens, and agriculture has brought humans and monkeys into closer contact. Natural food sources in forests are replaced by better-quality and more food in home gardens, at temples, and tourist sites. More food translates into more monkeys – a basic animal husbandry relationship.

The Sunday Morning Brunch inquired into whether this problem could be generalised to any areas in Sri Lanka famous for pilgrimages, and Dr. Dittus responded in the affirmative. “Whenever many people congregate and litter the environment with food, they will attract animals – not only monkeys but also crows and other species that benefit from human-sourced foods.”

The reason for its occurrence in urban areas, he said, was due to the excessive amounts of food littered and thrown into the environment by many. Some people purposely feed animals and that contributes to the problem in urban areas and elsewhere, he explained.

We asked Dr. Dittus of the ways the Department of Wildlife has addressed this issue, and he said that the DWC was overwhelmed with elephant issues, court cases, and were understaffed, stating: “Also, they have difficulties implementing scientifically based human-animal conflict solutions because of poor understanding by some of their staff, the public in general, and unrealistic political pressure.

“The DWC has caved into political demands to translocate problem animals to protected areas such as national parks, and this is extremely harmful to people and the animals.”

The translocation of problem animals was not a solution anywhere in the world, explained Dr. Dittus, adding that the Buddha teaches that if you want to solve a problem you need to remove its cause; that lesson should be followed in Sri Lanka, but unfortunately, it is not! “The solution lies in removing the cause of HMC. Removing the animals once you have a problem is a cosmetic solution and does not solve the underlying problem.”

The Primates Project also vastly contributes to conservation efforts in Sri Lanka and provides leadership and valuable insights to those working towards this. They assist in the prevention of poaching, tree felling, the reduction of HMC, have contributed to wildlife management manuals, and participated in training programmes. They continue to highlight the importance of requiring political support and public awareness in conservation.

“The survival of primates and other wildlife is very much a dependant on the availability of functional natural forest habitats. As in many parts of the world, forest areas are shrinking, with the effect that some local animal populations go extinct.

“The conservation of natural habitats is often at loggerheads with economic aims. The challenge, therefore, is to find and develop a synergy between the requirements of economic growth and nature conservation.

“Our approach has been to enlighten the stakeholders by pointing to the economic as well as cultural benefits of nature. We set the example of attracting foreign visitors to Sri Lanka to celebrate its wildlife. We are also trying to mitigate the effects of MHC that inevitably follows in the wake of human encroachment on wilderness areas.”

You can get directly involved with the project by adopting a monkey!

You can’t adopt a wild monkey as a pet, but the next best thing is a wild youngster that needs your fostering. You can select the species that you would like to adopt, and they will guide you in the selection. You can even select a unique name for it. Your support will help them monitor your monkey’s welfare and assure its wellbeing in the wild to the extent possible. They will send you photos and regular updates of its progress. You adopt a monkey for one year at a time. At the end of each year, you decide if you wish to continue fostering. You can even visit it!

The Soul: If you don’t love it, why even do it?

January 13, 2019 bythemorninglk No Comments
surviving financially as musicians – mainly making original English music here – is a challenge, the money and market is just not big enough, but thankfully our fans always show up.

October 17, 2018 bythemorninglk No Comments
The Barefoot Gallery is pleased to announce it will be exhibiting Shaanea Mendis D’Silva’s new series of work “Regeneration” from 12 October to 4 November.