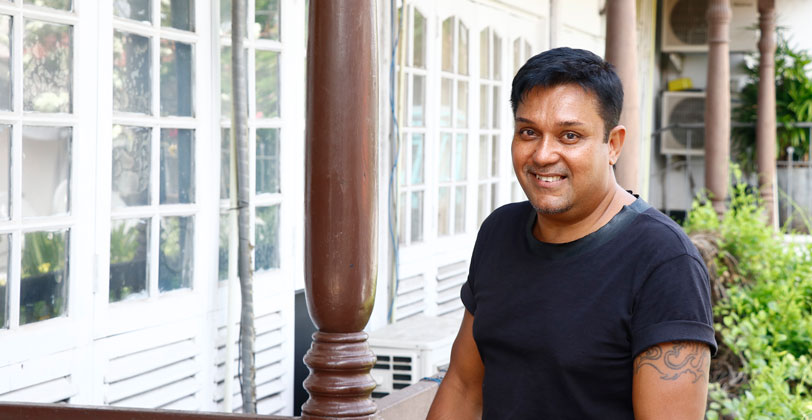 Characterised for his creative resilience and entrepreneurial capabilities surrounding the many initiatives that encloses him, not only is Stefan Andre Joachim an intrepid designer, but he is also vested with innate qualities that urge him to constantly prioritise humanity.
Deriving inspiration from the poor, the underdogs, and most importantly, the truth, Stefan’s ethos revolves around understanding the surrounding mindsets that reciprocate the facilitation of coexistence in a multicultural and multireligious environment. He is the co-owner of Arq Style House, Flamingo House, The Love Bar, and The Attic.
However, what caught our eye this time around were his “aspiring farmer” dreams. This follows his passion to grow crops which have been in existence for many years. “I guess I always drew gardens in my head ever since I was a child, but not really in real life. This concept isn’t all that alien to me either as my relatives have owned a reforestation programme in Tanamalvila since the 70s.
“They’ve always replanted forests, built lakes, etc. A long time ago, my uncle asked me to visit him to learn where my food came from and I responded to him saying that my food came from the supermarket. But it was years later that I understood what he was trying to say.”
Stefan stated that his conversion to a vegetarian was one amongst the other reasons that prompted him to begin embark on his longstanding hobby. His journey of going vegetarian began seven years ago, following a twisted turn of events that made him engage in meditation and yoga.
“I thought I’d do 20 days. That became 30, 40, and eventually, 50 days. Afterwards, I felt like I had a lot more energy and didn’t feel lethargic.” He shared that he then realised how farm animals were reared for the purpose of food, shedding light on how most people who consumer meat were oblivious to it. “I realised how animals like chickens and cows are particularly reared for the purpose of food. They are farmed to be murdered.”
A tricky predicament that constantly arose whenever he visited a restaurant – the lack of proper vegetable-based dishes, apart from the mundane salad – was yet another factor that made him come up with his urban garden.
This, coupled with his ability to cook impeccable dishes, has interestingly contributed to the overall idea. He said: “When people come over and I cook for them, they say if we can eat like this every day, we too can be vegetarian.”
The tropical nature of Sri Lanka aptly enables one to engage themselves in activities of this sort, “where things like humidity, sunshine and water is freely available, there are lots of things you can do”. At a time when carbon emissions have reached unhealthy levels, Stefan denoted how activities such as urban gardening enable us to keep our surroundings as green as possible.
It’s truly saddening to note how many of us tend to emulate western concepts and ideas to get through daily activities. According to Stefan, we aren’t required to do this as our tropical island is vested with everything necessary to create and work around factors that suit us best.
“We don’t have to follow a western concept when it comes to these things, we should follow our own model,” he said.
Nai miris, tomatoes, and capsicum are some of the main crops he grows. Stefan also shared that the prime source fed into these crops was food waste, explaining that this would mostly be what’s thrown away, stating that even the seeds were dried and grown.
“For instance when you take a tomato, the parts you cut and tend to throw away – like the seeds – are what we dry and use to grow.”
Despite the project being in its initial stages, Stefan hopes to expand. A project of this nature, as we were told, created a learning curve for him, especially as he experimented with new things to finally settle on the method that worked best. “Educating yourself on the subject matter is important, because when you learn it, nobody can fool you.”
Creation and design being his forte, Stefan delved further into the notion of how this initiation was therapeutic, for it has enabled him to focus on the things that make him content. He explained: “I’m at my peak at the moment and it will run for a while. With age and other things, your peak tends to drop, and my concept is to now give myself what I feel is my best.”

Actor Irrfan Khan passes away at 53

June 26, 2020 byJennifer No Comments
KK Collection is set to launch “Bamboo” at KK Beach in Habaraduwa, Galle on 1 July.