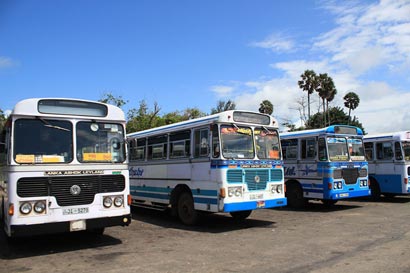 LPBOA President Gemunu Wijeratne told The Sunday Morning that the NTC should include the bus-fare hike to the monthly fuel pricing formula according to the fuel price.

The NTC should also review the pricing formula in consultation with the Finance Ministry, he added.

The price formula was operated until May this year. It was cancelled as some urged to give 12 percent fare hike, he said adding that a price formula was necessary to control the gap between bus fare and the fuel price.

Meanwhile All Island Private Bus Unions Federation (APBUF) has demanded a 10 percent fare hike in proportionate with the fuel prices.

However the Transport Ministry confirmed that a meeting would be held between Transport Minister Nimal Siripala de Silva and the bus unions next week regarding the bus fare hike. (MM)

Prez calls for unity to achieve peace and prosperity