By Sarah Hannan and Tharumalee Silva 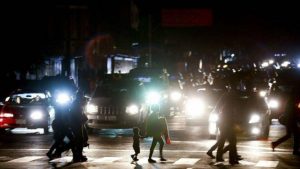 Given the existing weather patterns, the Government seemed to have been well aware of the reducing water levels in the reservoirs with an impending drought setting in. Yet the situation at hand seems to have worsened due to many of the contingency plans failing or being sabotaged over the years.

The drought at present has already affected 11 districts in which many of the reservoirs and hydropower plants are situated. Prior to this, whenever there was a power outage, the Ceylon Electricity Board (CEB) would blame it on the Norochcholai power plant’s generators malfunctioning. But later, state authorities stated that all generators are up and running and that the citizens will not experience power cuts.

Fast forward one week, the CEB informed that there would be intermittent power cuts across the country.

With many of the state departments having computerised their work, there were several complaints made by the public to say that they could not access essential services.

One such incident was posted on social media where an academic had gone to the nearby post office to send in some papers over the registered post to a university. However, the officer had stated that they were unable to issue stamps or accept the parcel since there was no electricity. He had then offered to hold the torch from his mobile for which the officer had stated that they cannot do so.

The academic had then gone up to the postmaster to complain about it. The postmaster had later apologised for the oversight and informed that they can accept his parcel and issue stamps for his parcel to be sent over the registered post. He had not been the only person who was waiting to send important documents across to other state institutions.


The Sunday Morning contacted the Mount Lavinia Post Office to inquire about how the power cuts were disrupting their day-to-day work, to which they responded: “The post office faces difficulty in issuing receipts since the entire system is computerised. Especially since the Ordinary Level results were released, the post office is unable to issue receipts to students who are applying for recorrection.”

Another image has been in circulation over social media in which the Additional District Registrar office, Dehiwala had displayed a notice to inform the public that they were unable to issue birth, marriage, and death certificates due to the existing power cuts (see image).

We then contacted the National Water Supply and Drainage Board General Manager Eng. K.P.R.S. Samarasinghe to inquire about how their services were affected due to the power cuts.

“Due to the prevailing dry weather conditions, we have observed an increase in water usage in many areas. Furthermore, with the drought setting in, we are heading towards a water shortage. The water supply to areas located on mountains is affected as the water is not being pumped at the regular pressure, leaving those areas with a lower supply of water,” he stated.

Meanwhile, citizens too have been inconvenienced by being unable to get their water bills updated. The Sunday Morning learnt that people had been told the bills were not updated due to the power cuts, after dropping by at the Water Board to check bill discrepancies.

Most of the larger companies and institutions would ideally have a generator on site in case of a power cut which automatically turns back the power during a power outage. However, the continuous power cuts are now affecting small businesses such as bakeries, grocery stores, grinding mills, milk bars, and tailors to name a few. Their general sentiment is that it was too expensive for them to hire or purchase a generator for their small-scale businesses.

A bakery owner residing in Rilaulla, Kandana stated that the power cuts were greatly affecting their businesses. “We cannot bake bread and cakes on time due to the power cuts. I haven’t closed down my business, but I have incurred losses. Lately, we have been working around the power cuts and scheduled our baking times accordingly.

However, when the power cuts come unannounced, we are unable to function,” he stated.

Kumara, a grocery store owner in Thalangama, stated that many of the dairy products that require refrigeration are spoiling and they have no way of returning it to the companies. “Whether I sell this lot or not, by the end of the month, I have to pay them for the consignment that I have. I have stopped placing orders for now since I don’t want to run on a loss. But with the current weather, many people keep asking for items such as ice creams and chilled drinks and I cannot even supply what they require,” he stated.

PUCSL and Ministry responsible for the power crisis

“There is clearly mismanagement that is taking place within CEB as well as the Ministry of Power Energy and Business Development. The board is well aware that during this time of the year, the country experiences a dry spell and if sufficient energy is not generated, we will have to schedule power cuts to manage the supply.”

Boteju explained that the Public Utilities Commission of Sri Lanka (PUCSL) had approved the installation of over 10 power plants in 2016. However, the constriction of these power plants never took place.

“A good lesson was the tender issue linked to the Kerawalapitiya LNG Power Plant. If the tender issue was sorted and the power plant was constructed by now, we would have sufficient electricity supply for the national grid. If the Environmental Impact Assessment was carried out on time, the delay was clearly caused because of the inefficiency of the management.”

He also pointed out that there were visible discrepancies in awarding the tenders and as a practice it was to be awarded to the bidder who offered the lowest cost, but the tender was divided and given to two bidders.

Boteju stated that the PUCSL and the Ministry of Power Energy and Business Development should take sole responsibility for the ongoing power and water crisis.

July 8, 2019 bythemorninglk No Comments
The Government has been accused of attempting to acquire private land in the Hambantota District to implement various projects.

September 22, 2019 byThe Sunday Morning No Comments
The parliamentary Committee on Public Enterprises (COPE) this week probed the controversial Batticaloa Campus in addition to declaring that it would also begin an inquest into the construction