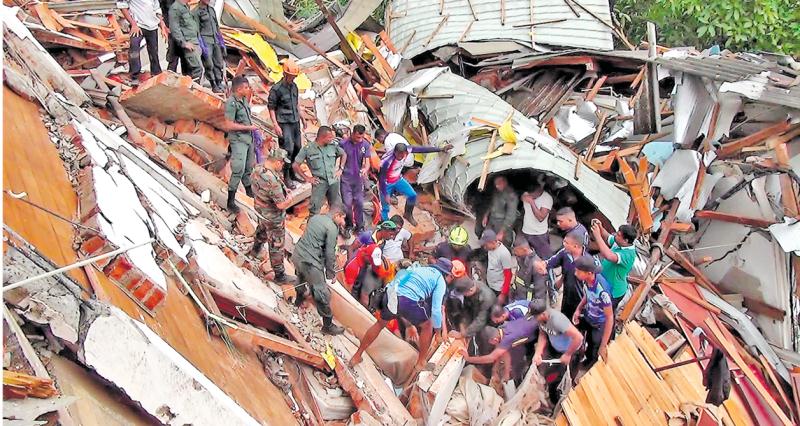 The collapse of a building in Buwelikada, Kandy last month took the lives of three including a newborn baby

Unplanned construction and poor-quality design have been identified as the main reasons behind the man-made catastrophe of the collapse of a building in Buwelikada, Kandy last month which took the lives of three including a newborn baby, according to the National Building Research Organisation (NBRO).

Speaking to The Sunday Morning, NBRO Director General Eng. Dr. Asiri Karunawardena said the detailed report of the investigation conducted by the NBRO on the Buwelikada incident has been completed and handed over to Central Province Governor Lalith U. Gamage on Thursday (1).

According to him, the NBRO has identified that one of the main reasons for the collapse of the building was the structural instability caused as a result of the poor-quality design and construction.

“It’s a five-storey building and the structure was not adequate to hold the building capacity,” he stressed, adding that the complete details of the report would be revealed to the public by the relevant authorities.

The investigation had been conducted as per a request made by Governor Gamage soon after the incident had occurred. A committee has also been appointed to look into the matter and a separate report on the incident is also being prepared by the Kandy Municipal Council (KMC), while another report has been requested by the Governor to inspect the condition of all the buildings in the city.

The Central Province Governor also told the media that there are incidents where the owners have constructed the buildings without following the proper plans which were approved by the municipal council.

The building structures in landslide-prone areas, especially in Kandy, should be constructed as per the architectural designs that are suitable for such areas, he stressed, adding that the heavy building architecture was not suitable for the area and therefore, steps should be taken to change the design types in future constructions.

“These people have to live in this area and they have nowhere else to go. Therefore, like in Japan, a suitable structural method should be applied,” he said.

The recent man-made disaster in Buwelikada, Kandy was an eye-opener for the entire nation on the quality of constructions, whether private or public.

It also diverted the attention of law enforcement authorities as well as policymakers to the loopholes in the procedures followed by local governmental institutions when approving a building plan, especially in high-risk, landslide-prone areas.

It’s a well-known fact that the official procedures for resolving disputes in the building industry do not function effectively and that the current system of certification of building plans also stimulates corruption as much as it does not guarantee the quality of projects.

The approval of building plans by local government institutions has now come under scrutiny following the deadly disaster in Buwelikada.

When asked by The Sunday Morning what steps have been taken by the NBRO to regulate the building constructions in landslide-prone areas, Dr. Karunawardena said: “At present, the NBRO is examining the lands. Because of the proposed construction, if there is a landslide activated, we will give recommendations including what kind of building is suitable for the respective plot of land.

Furthermore, Dr. Karunawardena noted that the NBRO is co-ordinating with relevant parties. It’s mandatory to get NBRO recommendations when there is a construction in a landslide-prone area, he said, adding that they try to regulate the quality of the building with local authorities, for which a discussion is underway.

According to the NBRO, the objective of giving clearance for construction in landslide-prone areas is to minimise the landslide disaster risk and also to increase the safety of life and property from future slope instabilities.

Meanwhile, concerns have also been raised over the unregulated construction of high-rise buildings in urban areas.

High-rise buildings have continued to sprout unabatedly in the capital city of Colombo over the last decade in order to compensate for a lack of space for the city’s rapidly growing population, bringing to the fore public concerns about the rules and their safety.

While some see high-rises as a symbol of growth and modernity, critics say that an unchecked building brings along attendant problems such as traffic congestion, waste management issues, as well as potential damage from disasters like fires as some builders have cut corners with respect to ethics, safety, legality, and transparency, thus harming the locals who have been living in the city for many years.

Speaking to The Sunday Morning, Urban Development Authority (UDA) Director General Prasad Ranaweera said the UDA would review all approvals granted for condominium projects during the previous Government, as there were a number of allegations levelled against the procedures followed by the then UDA and the then Ministry while approving projects.

He also alleged that those granting approvals for these projects are also involved in corruption and bribes and that the UDA will review all procedures and regulate the construction of high-rises in urban areas.

June 3, 2020 byTSM Web Desk No Comments
The second penumbral lunar eclipse of 2020 will begin on June 5th night at 11.15 p.m. Sri Lanka Standard Time, when the shadow of the Earth falls on the Moon said Prof. Chandana Jayaratne, the Directo