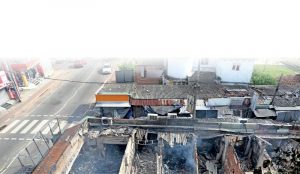 The news everywhere is bad; I know. Sri Lanka is burning again. Is Hanuman back here?

Sometimes, I don’t know if I am living in the times of Ramayana or not – too much intrigue, too much angst, and too much burning.

And as always, it’s the poor people’s houses that will burn.

500 years from now, people might read about Sirisena and/or Mohamed Zahran but will they know the toll on the common people? Why are the common people so dispensable? I keep asking this again and again. Why are we just a footnote – in our histories, in our political stances, and in our policies right now? Are we cannon fodder and nothing more?

People power indeed. Where is our collective power? This is so wearying.

I am one of the “privileged” in Sri Lanka right now. A minority yes, but not the targeted minority.

Thus, I can sleep without fear of attack nightly, while Muslims around the country stay awake in case a pogrom à la ‘83 heads their way. No, that’s not paranoia they are exhibiting; it’s a very legitimate fear. In recent days, I have watched anxiously while my Muslim friends post on social media – over and around the social media ban – about contingency plans if the violence being unleashed in pockets of the country – primarily Muslim pockets – heads their way. What a way to live. An entire demographic of people having to pay for what a handful of terrorists did.

As I write, hundreds of Muslim businesses have been looted and destroyed. One Muslim man, the main breadwinner of his young family, has been killed. Several others have been attacked. And all this in the face of security personnel swarming all over the country, allegedly to maintain peace. So where is the peace? All we see is pieces. Pieces of Sri Lanka. Pieces of our hearts. Pieces of our collective harmony and goodwill, being cleaved with swords even as we speak. And no, it is not the Muslim community wielding the swords, even though they are being made to answer for why they had any in the first place. The lions representing the flag carry the weapon with impunity.

As if all that were not enough, to put the icing and the cherry on the top of this crumbled cake comes the media. So much irresponsible reporting, rabble rousing, and race baiting was being published in recent days in mainstream newspapers; I don’t even know where to begin. The Muslim community is not only under siege, they are being painted as the oppressors in the media. Much of the race baiting is so bad it is almost laughable – except there are many stupid people out there, and irresponsible media carriage like this will only serve to legitimise their active, rampant racism.

No, the Muslims are not taking over, and you are not under threat, calm down.
I know there will be the inevitable outcry of “what about the real victims of the Easter attacks here?” as if we are subsuming them. Let me pre-empt you: Yes, the people and children who died in the Easter Attacks should be mourned. As a country, we have not had collective time to mourn them – it’s been too much of a roller coaster since then.

But, if your idea of “mourning the dead” is to go berserk attacking the Muslims – and head off questions on what the heck you are doing with, “traitors, ask about the real victims here” – then no, many of us “traitors” are not going to put up with that. This holier than thou rhetoric doesn’t wash either. This is precisely what landed us here in the first place.

Organised religions have two main aspects – providing spiritual solace (which is what they should be there for) and political manoeuvring (which they ideally should have no truck with, but they do). The first is beneficent, the second malignant.

When people stick to the spiritual aspects of religion alone, which is why the vast majority of the faithful of any religion subscribe to religions in the first place, life is stable and sustainable for all concerned.

It is when politically (or geo-politically) motivated powers use the political aspects of organised religions to whip up mindless hatred in people, mobilising them to engage in violence of the sort that they otherwise would not engage in, that we come to the sort of sorry mess we currently see in Sri Lanka.

Over the last five years, I have been watching developments in religious fundamentalism – across all religions practiced here – with a furrowed brow. None of these movements are organic, that goes without saying. We are clearly being puppeteered at the hands of bigger powers. But then the question arises, why as sentient humans do we still get puppeteered so effectively?

Why can’t we step back and say, no, we will not subscribe to such a vicious “them vs. us” rhetoric?

Most people subscribe to religion to ensure stability in their lives. Ironically, that very tool is being used to destabilise us now.

Mandatory disclaimer: Yes, I know religion can be used as a force for good – such as when Cardinal Malcolm Ranjith stepped up in our leader-less vacuum to showcase remarkable leadership which directly paved the way to significant peace and good will among the affected communities. In the face of so massive an attack upon his community as the unprovoked Easter attacks, such leadership in averting revenge attacks while fostering goodwill between the affected Christian community and the Muslim community is truly commendable.

Yet, religion can, and indeed is, being used also to corral tribalism and blood thirst, right now in Sri Lanka.

The Easter attackers are all terrorists, we are clear on that. Who were the people burning mosques and Muslim businesses in recent days? Nationalists? What a nice-sounding word. So conveniently reminiscent of patriotism, which is also touted as a good word. While the rest of us are “traitors” because we refuse to loot and burn?

So the burqa and the niqab have been banned have they? Such a load off our minds on enforcing national security, that. Oh wait! The terrorists vandalising Muslim properties have their faces covered with cloth too – how did they get allowed to be out and about like that, especially in this current climate? Where are the reams of media reports talking about how this is a threat to national security? Where are the demands on the need for the Sinhala-Buddhist community to introspect on what went wrong from within? Instead, much of the media coverage was devoted to the swords recovered from mosques, charges that the Muslim community is still scrambling to answer for.

Many of the mosque attackers had swords too. Why did they have stockpiles of them handy, and how were these caches missed in the security sweeps across the country?

As usual, there are far more questions than answers. Do you, the average citizen, ever feel like you’ve been made to wear a dunce cap at the end of all this? I often do. We are all being made collective fools of – and we are letting them.

Yet, as a Tamil, I am aware that feeling foolish and manipulated is a position of privilege, given that those are the worst of my concerns at the moment. The Muslims scrambling to answer charges of terrorism as a collective community while also scrambling to save their lives, limbs, and property have it much worse. I empathise.

We come from a stock that knows how it feels like to have to continually prove how Sri Lankan we are, whilst at the same time being made to feel as if we are only invaders and usurpers who will never be accepted as true blue Sri Lankans no matter how hard we try. And if the black sheep that will exist in every community like Zahran and co. disrupt the model minority behaviour we all are beholden to, we will collectively have to pay for it.

The Muslim community is paying for it now.

As for those making them pay – well, they are the “nationalists”. They can cover their faces if they want to. They can not only carry but also use swords with impunity if they want to. No one will question their Sri Lankan identity.

But the bard was right in one aspect. By whatever name, they stink just as much.


(Thulasi Muttulingam is a freelance journalist based in Jaffna. All views expressed are her own and not of any organisations affiliated to her)

August 12, 2019 bythemorninglk No Comments
The appointments of President’s Counsels (PCs) stirred much controversy after President Maithripala Sirisena’s move to appoint over 75 counsels since last March.