Candidate will be selected at correct time : John 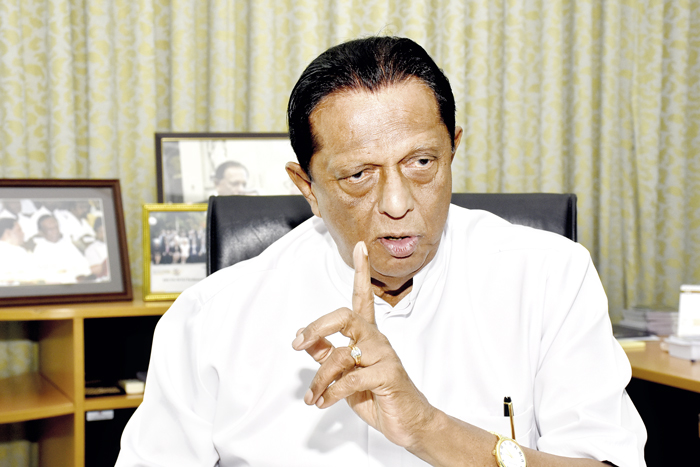 United National Party (UNP) stalwart Minister John Amaratunga said the selection of the party’s presidential candidate will be made at the correct time following the correct process. The Minister further noted that he did not see anything wrong with Sajith Premadasa campaigning and he did not expect the party to take any disciplinary action in this regard despite there being a suspension on campaign activities.

Why is the UNP taking so long to select and name its presidential candidate?

But wouldn’t that give your political opponents an advantage, especially when it comes to canvassing?

No, not at all. In the previous election, we had only three weeks for the campaign and we emerged victorious. This time, we will have more time, so we are not worried at all about any so-called advantage to the other political parties.

With so much support for Sajith Premadasa, why isn’t he the obvious choice for the UNP as its presidential candidate?

No. The selection will be made at the correct time following the correct process. There is no question we have to put forward a winning candidate.

But Premadasa seems to have the most support, both within the party and even among its supporters. So why then is the selection process taking so long?

There is time for that. Like I said, the UNP constitution provides certain provisions and we must follow those provisions when attending to matters of such significance.

Many have opined that this seems to be UNP Leader Ranil Wickremesinghe’s final chance at trying to become president. As such, he is attempting a last-ditch attempt which is causing this deadlock within the party. How do you see this?

I don’t see anything like that at all. What he wants to do is to make an assessment on how we could win this election. It is not just about nominating a candidate. We have to assess the mindset of the people. We have not been carrying out an effective campaign. We will start that soon. That is what is important. There is no point nominating candidates if we cannot ultimately win the election.

Of the two – Wickremesinghe and Premadasa – who do you think is the better candidate and why?

We will have to do a survey and see. A proper survey must be done to ascertain what is in the minds of the people. Then, and only then, can we see who the better candidate would be for the UNP.

Despite the UNP leadership declaring a moratorium on campaigning activities, the Premadasa camp is going ahead with their activities and even held the Kurunegala rally successfully. Will the party take disciplinary action against Premadasa or anyone in that camp?

No, not at all. Why should we take disciplinary action? It’s very good. Having meetings and promoting our party is a good thing. I see it as a good thing.

So, is Prime Minister Wickremesinghe too carrying out such activities?

Yes, of course. How many functions has he attended? How many places has he visited and met with people? That is not something wrong. It is good for him as well as the party.

Apart from Premadasa, other names have been mentioned as possible candidates. Do you feel that any of these other candidates could pose a strong challenge to Gotabaya Rajapaksa?

There is a feeling that Anura Kumara Dissanayake’s decision to contest the election is mainly to split the SLPP vote and give the advantage to the UNP. How do you see this?

Well, the Janatha Vimukthi Peramuna (JVP) and Anura Kumara Dissanayake are leftist, so they will be getting that vote. So, if the SLPP is also leftist, then the vote is obviously split. So I think the left vote will heavily go to Dissanayake.

With Dissanyake also heavily campaigning for the minority vote, isn’t the UNP at risk of losing minority votes?

Dissanayake and the JVP are also canvassing the LGBTQ community vote. Will the UNP seek to garner this vote base as well?

July 29, 2019 bythemorninglk No Comments
United People's Freedom Alliance (UPFA) MP Tharaka Balasuriya asserted that the Government and authorities must reveal the identities of the politicians involved in the illegal drug trade so that the

October 6, 2019 byThe Sunday Morning No Comments
Business tycoon and entrepreneur Rohan Pallewatte, while advocating for the executive presidency, seeks to revamp the economy and uplift the lives of the common man.