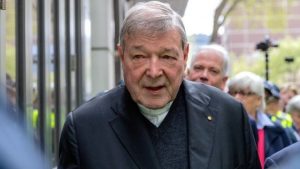 Cardinal George Pell, the most senior Catholic cleric to be convicted of sexual abuse, has failed in a legal bid to quash his convictions in Australia.

Pell was jailed for six years in March after being found guilty of abusing two boys in a Melbourne cathedral in the 1990s. He maintains his innocence.

A court of appeal rejected Pell’s argument that the verdict was unfair.

The former Vatican treasurer, 78, will now consider a final appeal in the nation’s highest court.

Pell challenged the verdict by arguing it was “unreasonable” because there was insufficient evidence to convict him beyond a reasonable doubt.

The cleric’s lawyers said the jury had relied too heavily on the “uncorroborated evidence” of the sole surviving victim. But his appeal was dismissed 2-1 by a panel of three judges in Victoria’s Court of Appeal on Wednesday.

“Justice [Chris] Maxwell and I accepted the prosecution’s submission that the complainant was a compelling witness, was clearly not a liar, was not a fantasist and was a witness of truth,” said Chief Justice Anne Ferguson.

Pell’s conviction has rocked the Catholic Church, where he had been one of the Pope’s closest advisers. The Australian cleric will be eligible for parole in October 2022.

A jury rejected the defence argument that the allegations were fantasies. It convicted Pell of one charge of sexually penetrating a child, and four counts of committing an indecent act on a child.

The verdict was kept secret from the public until February, when additional charges of sexual offences against Pell were withdrawn by prosecutors.

What did the court of appeal say?

The two judges who upheld the conviction said that they “did not experience a doubt” about the verdict.

“We note that Cardinal Pell did not have to prove anything in the trial. Rather, at all stages of trial, the burden of proof rested with the prosecution,” Justice Ferguson said.

Pell, who was present for the hearing, had faced the prospect of a retrial or being immediately set free if his appeal had been successful. BBC

August 21, 2019 byTSM Web Desk No Comments
US President Donald Trump has cancelled a state visit to Denmark after the nation's prime minister said Greenland was not for sale to the US.

No homecoming for Rohingyas

July 12, 2019 byRandev No Comments
In Myanmar’s Rakhine state, hundreds of new houses have been handed over to families displaced by the violence of the Rohingya crisis in 2017. But none of the homes were for the Muslim minority group.