October 5, 2020 by Skandha Gunasekara No Comments 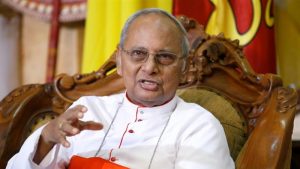 Archbishop of Colombo Cardinal Malcolm Ranjith has postponed a meeting that was previously scheduled to be held this week with Catholic MPs due to the prevalent coronavirus situation.

Secretary to the Bishop Rev. Fr. Deninton Subasinghe told The Morning that the meeting had been postponed by Cardinal Malcom Ranjith.

“The Cardinal has decided to postpone the meeting with the Catholic parliamentarians,” Rev. Fr. Subasinghe said.

He said the meeting had been scheduled for Tuesday (6).

“The Cardinal wanted to meet the MPs to discuss an array of matters.”

However, it is learnt that the probe on the Easter Sunday attacks was to be taken up for discussion during the meeting.

April 20, 2020 byTSM Web Desk No Comments
1 more COVID-19 patient has been reported today, bringing the total number of COVID-19 cases in the country to 304.

May 10, 2020 byTSM Web Desk No Comments
Two Chinese doctors recently published a research letter on the Journal of the American Medical Association (JAMA) Network exploring the possibility of SARS-CoV-2 being transmitted sexually