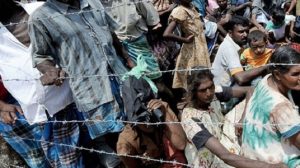 Two Tamil Nadu journalists have been booked for interviewing Sri Lankan refugees and writing a news story on their perspective on the CAA-NRC issue, India Today reported.

A reporter and a photojournalist from the the Vikatan Group were booked under Indian Penal Code sections 188 (disobedience to order duly promulgated by public servant), 447 (criminal trespass) and 505-1b (publishing material with an intent to cause fear or alarm).

The FIR claims the duo entered a refugee camp and “instigated the refugees to conduct a revolution against CAA”.

They’ve been booked under non-bailable charges, and the police are trying to track them down.

In Tamil Nadu, the issue of Sri Lankan Tamil refugees is part of the ongoing debate on the Citizenship Amendment Act — the law only covers illegal immigrants (belonging to six non-Muslim minority religious groups) from Pakistan, Bangladesh and Afghanistan.

Several opposition parties have demanded that Sri Lankan Tamils be included in the purview of the legislation.

“Attacks like these on the press in a democracy must be strongly condemned,” DMK MP Kanimozhi said, referring to the FIR against the Vikatan journalists.

“I ask that the cases on the media persons be withdrawn immediately.”

Kamal Haasan’s Makkal Needi Maiam party, too, has condemned the state government’s action, and said the non-bailable charges must be withdrawn.

As well, some journalists have met the state police chief and asked that the case against their colleagues be revoked.

SL records 103 fatalities due to electrocution in 2019

February 12, 2020 byTSM Web Desk No Comments
Sri Lanka reported 103 fatalities due to electrocution in the year 2019 up from 89 fatalities reported in 2018, the electrocution report 2019 released by the Public Utilities Commission of Sri Lanka (

October 21, 2020 byCharindra No Comments
Concerns have been raised by Medical Laboratory Technologists (MLTs) over the issues relating to PCR tests and the delay in introducing new testing mechanisms that suit bulk testing.