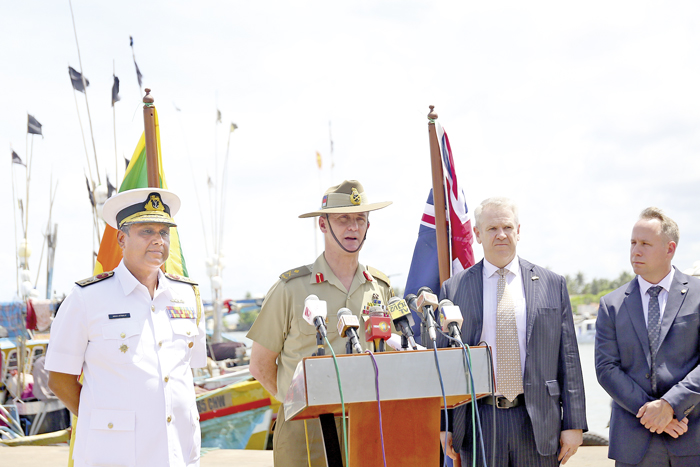 Emmanuel Marcus, a Negombo resident, got onto an overcrowded, unseaworthy boat sailing towards an unknown future in Australia. After a perilous journey, Marcus and other desperate Sri Lankans reached the shores of Australia, but there was nobody to take them into the country, despite promises made by the boat manager.

“We were told that when the boat reached Australian waters, a group would come and take us. As promised, a group of Sri Lankans came, but took only a few people,” he said, adding that the rest were abandoned and therefore, had returned as there was nobody to get them into the country.

Marcus made his first attempt to journey to Australia from Negombo with a few others in the year 2000.

Even though his first attempt failed, Marcus did not give up; he tried again and again until he was taken to a detention camp on Christmas Island by coastal officials in Australia and later sent back to Sri Lanka.

Since then, Marcus, who is now in his late 60s, has been employed as a boat guard at the Negombo Fishery Harbour.

Speaking to The Sunday Morning of his experience, Marcus said: “I saw a lot of my friends who had been to Australia come back to Sri Lanka with money and build houses for themselves,” he said, adding that many of his friends left without any documents. 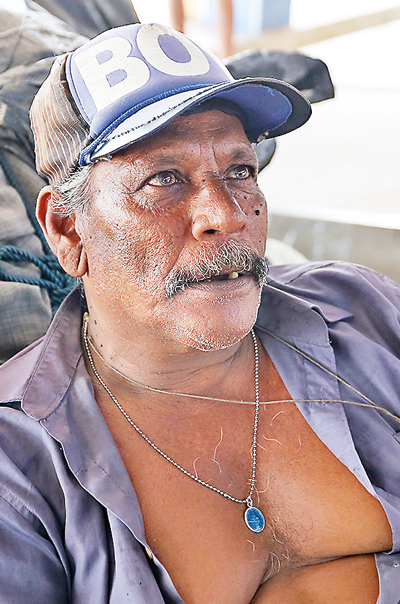 “I thought I could be one of them,” he said.

During his three attempts, Marcus was not alone in the desire to risk it all to take the dreaded trip to Australia in the hope of finding employment. To reach Australia, they travel for days under harsh weather conditions and suffer abuse from smugglers and criminal networks while parting with huge sums of money for the journey.

“We know it’s illegal, but what else can we do? We don’t get a chance to go abroad legally and we can’t live with the small sum of money we earn from these jobs,” he lamented. “People would not take this risk if they can live happily in Sri Lanka,” he stressed.

People like Marcus – and dozens of others who are willing to risk their lives en route – have now become Australia’s biggest concern.

Twenty such illegal immigrants were returned in May and five in June while 41 were rescued by Sri Lanka Navy (SLN) a few months ago in the mid-Indian Ocean.

In light of the recent rise in illegal migration, Australian Major General Craig Furini, who is in charge of Operation Sovereign Borders (OSB), visited Sri Lanka twice so far this year to monitor ongoing awareness campaigns and measures taken by SLN to prevent any attempts to cross borders via illegal boats.

Addressing a media briefing held in Negombo last week (3), Maj. Gen. Furini reiterated that there was zero chance of success for anybody who comes to Australia illegally by boat.

“Do not come to Australia by boats,” Furini said.“Our first mission is to stop people from getting onto boats and risking their lives. That is why I am here today meeting my colleagues in Sri Lankan Navy, Coast Guard, Police, fisheries, and other security agencies to identify how we can do more to counter people smuggling.”

According to him, since the setting up of the OSB in September 2013, Australia has worked with Sri Lanka to return 204 people from 12 people-smuggling boats with no one reaching Australia.

“Australia’s border protection policies remain strong and unchanged. Between 2008 and 2013, about 50,000 illegal immigrants had come to Australia by boat in 810 separate journeys and some 1,200 people died at sea. We will not allow that to happen again,” Maj. Gen. Furini said.

Even though law enforcement authorities of both countries have tightened their security measures, new incidents are yet reported almost every month, which means the tightening of naval security is not the only solution for the issue. A number of awareness campaigns have been launched by both the Government and the Australian High Commission in Colombo, but the number of incidents reported is an indication that people have not given up hope to enter Australia this way.

“This can be stopped if the Government addresses issues such as poverty among the people,” Marcus claimed.

“Now, I don’t think people here are planning to go to Australia. What we heard is that they are now sailing to a few other European countries,” he said, adding that the tough security measures taken by the Navy impacted the livelihoods of almost all the fishermen.

“Because of these security measures, the Navy is checking every boat and only fishermen who have national identity cards (NIC) can go fishing. Some people don’t have NICs. There is an ID issued by the Fisheries Ministry, but the Navy doesn’t let the fishermen go fishing with that ID. As a result, the boat owners had to find people with NICs, which is sometimes difficult and resulted in delaying the turns,” Marcus stressed.

However, another fisherman said the security measures have been taken for the betterment of the fishermen and therefore, they had to somehow tolerate the day-to-day routine checks.

Speaking to The Sunday Morning, Ceylon Fisheries Corporation (CFC) Negombo Harbour Manager M.D.S. Vaas said that there were around 600 boats in the harbour and all security checks are conducted by the Navy.

“The vessels are monitored by the Fisheries Department through the Vessel Monitoring System (VMS) and the boats that leave the harbour are inspected daily,” he said.

Further explaining the situation in Negombo, Fisheries Harbour Officer in Charge (OIC) W.P. Kalyanapriya told The Sunday Morning that usually the boats that leave the harbour are not crowded and the smugglers bring aboard people from other areas.

“Sometimes, it isn’t necessarily from Negombo. And also, there are around four private jetties in Negombo, and these transport people from high-risk areas for human smuggling,” he added. 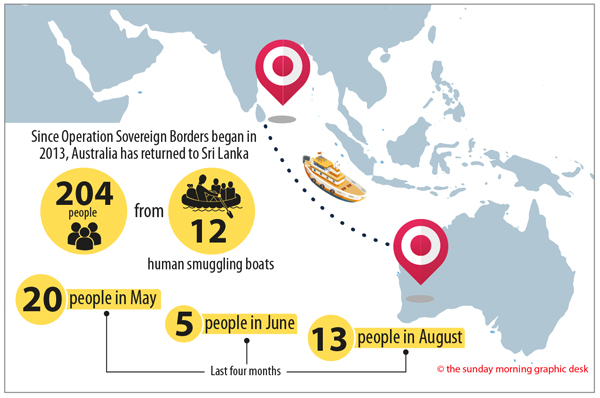 Locals trying to migrate to countries like Australia on boats and various sea vessels through illegal means have used unapproved illegal ports islandwide to set sail.

Meanwhile, Director Naval Operations Rear Admiral N.P.S. Attygalle said that law enforcement agencies of both Australia and Sri Lanka are working together in combating illegal migration and human trafficking where innocent people are lured and their money being robbed by smugglers.

“We patrol the Sri Lankan waters and the Australian Navy, their waters. This is done not only by ship but by aircraft too. We immediately return anyone who travels by boat and all those who arrived in Australia by boat have already been returned. Since the beginning of Operation Sovereign Borders, every single Sri Lankan who has gone illegally has returned to Sri Lanka,” he added.

A case of selective enforcement

July 15, 2019 bythemorninglk No Comments
The International Covenant on Civil and Political Rights (ICCPR) has come under severe criticism from the public due to the many instances where the Act was allegedly misused by law enforcement.

May 19, 2019 bythemorninglk No Comments
Revealed to Prophet Mohamed in the month of Ramadan of 610 by the Archangel Gabriel (Jibril), the Quran (meaning recitation) functioned as an aural/oral scripture...