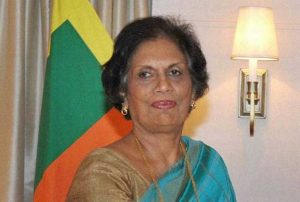 Kumaratunga made these comments in a public letter addressed to all the SLFP supporters.

“The opportunist leaders  including the President of the country have dismissed the views of 95% of the party organizers and have gone ahead with an agreement with the conspirers purely based on personal gain.” Kumaratunga claimed.

“The SLFP has been a party that has respected and upheld democracy. Our party has not hosted murderers, fraudsters and the corrupt, the SLFP will not allow injustice to rule again, ” the former president stressed.

She said it was the first time in history that the SLFP had not put forth a candidate for the presidential elections.

“We have created Presidents and Prime Ministers. My heart cries to see the fate that has befallen the SLFP”

Highlighting that such agreements would lead to the destruction of the SLFP, Kumaratunga urged all SLFP supporters to be more mindful in the forthcoming presidential polls.

“We have to rise against efforts made to destroy this beloved party. I extend my unstinted support to those who have started the fight to protect the party and its policies ”  Kumaratunga said.

The SLFP last week signed an MOU with the SLPP, pledging its support to SLPP presidential candidate Gotabaya Rajapaksa at the forthcoming presidential elections.

January 27, 2020 byTSM Web Desk No Comments
The Ministry, Embassy and Consulate Generals are also working with the Sri Lankan Airlines in seeking to operationalize instructions to bring back all other Sri Lankan students presently in China.

April 6, 2020 byTSM Web Desk No Comments
The Embassy of the UAE to Sri Lanka in a press statement today vehemently denied reports of banning the burial of COVID-19 victims and ordering cremation of bodies.