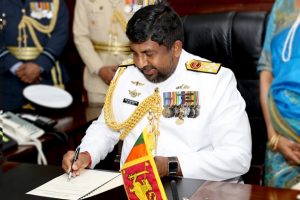 He joined the Sri Lanka Navy on 01 November 1980 as an officer cadet of the 9th Intake.

Wijegunaratne is also accused of aiding and abetting Lieutenant Commander Chandana Hettiarachchi, alias ‘Navy Sampath’, the main suspect in the abduction, unlawful detention and murder of 11 youths in 2008 and 2009.

March 22, 2019 byRandev No Comments
China has signed a concessional loan agreement of 989 million US$, covering 85% of the total contract price of the Central Expressway Project- Section 1.