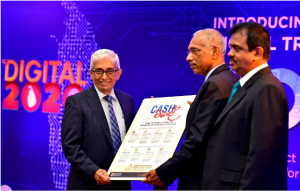 The Central Bank of Sri Lanka (CBSL) yesterday (11) launched a campaign to make 2020 the year of cashless transactions in Sri Lanka, aimed at raising awareness about the possibilities and benefits of digital transactions.

The promotional campaign of “2020 – Year of Digital Transactions” was launched by Deshamanya Prof. W D Lakshman, Governor of the Central Bank on 11 March at the CBSL with the attendance of senior bankers, officials of non-banking financial institutions, central bankers and other dignitaries. .

Following the launch, Mr. D Kumaratunge, Director Payments and Settlements of CBSL, introduced the advertising campaign of “Cash වදේ”. The campaign depicts the worries that both consumers and businesses face due to using cash, such as the risk of being robbed or losing time in queues. The launch, which marked the official beginning of the retail level campaign, aims to draw as many customers to use digital payment methods such as mobile applications, the LankaQR code, and credit and debit cards.

The need for such a promotional campaign stemmed from the lack of awareness of the public of the numerous state-of-the-art digital payment methods that are available in Sri Lanka. CBSL, together with banks and other payment service providers has planned to implement the promotional campaign in several phases throughout 2020. This phased approach is designed in a manner to ensure that the awareness campaign is effectively delivered to all segments of society.

The first phase of the campaign was to enable staff of banks and financial institutions to create awareness of digital payments among the general public. This took place in first two months of 2020. The next phase was to openly raise awareness amongst the general public with a promotional campaign targeting the retail level, inclusive of both consumers and retail businesses. In addition to the advertising campaign, CBSL has planned a series of awareness programmes, including sessions for students, media, teachers, public and private sector employees, and other members of the public as well as publications to raise awareness of digital payments

Welcoming the audience at the launch event, Mr. H A Karunaratne, Deputy Governor of CBSL, noted the vast number of digital initiatives that CBSL, LankaClear and banks have implemented over two decades that kept Sri Lanka’s payment infrastructure at a globally competitive level. The event also had several distinguished speakers representing stakeholders of the retail level campaign. The guest speaker Mr. R Theagarajah, Managing Director/CEO – Cargills Bank highlighted the role of the banking industry in the digital era through his speech on “Is Sri Lanka’s banking industry ready for the next wave of digital transformation?”.

The Regional Industry Director Financial Institutions Group, Asia Pacific, International Finance Corporation (IFC), Ms. Rosy Khanna, articulated that it was imperative that all stakeholders worked towards improving digital financial inclusion in Sri Lanka. Mr R A A Jayalath, Assistant Governor of CBSL, explained the digital landscape in the three years in Sri Lanka. Further, he noted the steps that were taken to strengthen the security and efficiency of digital payments to ensure customer confidence. Mr D Kumaratunge, Director Payments and Settlements of CBSL, presented the initiatives to promote a less-cash society in Sri Lanka. These included new projects such as the LankaQR Code and the Fintech Regulatory Sandbox that were recently launched and the Blockchain based Shared Know-Your Customer (KYC) solution, and Open Banking project, which are in progress. He recognized the responsibility of all stakeholders, especially the banks and other financial institutions, to ensure that the success of the project by connecting with new products introduced by CBSL and LankaClear (Private) Limited (LCPL) as well as actively engage in creating awareness of these products.

Deshamanya Prof. W D Lakshman, Governor of the CBSL concluded the event by highlighting the economic benefits of moving to digital payments. Further, he noted that the World Health Organisation (WHO) has also identified that bank notes may carry the virus and recommended that digital payments, especially contactless payments be used. He invited all stakeholders to join this campaign so that Sri Lanka can reap the full potential of digital payments at all levels of the economy.

May 13, 2020 byCharindra No Comments
The Colombo Stock Exchange saw a net foreign outflow of more than Rs. 114 million yesterday, with the pent-up selling pressure created by a seven-week closure of the market being unleashed.

April 16, 2020 byTSM Web Desk No Comments
The Tea Trade is anxiously waiting for the next tea auction on the Digital platform scheduled for 16th , 17th and 18th April after successful completion of the first ever tea sale on a Digital platfor