October 9, 2019 by Charindra No Comments 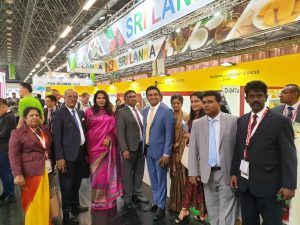 Sri Lanka’s country-of-origin trade mark for the spices sector was launched in Frankfurt on 06 October during the Anuga 2019 International Food and Beverages Trade Fair held in Cologne, Germany, the Export Development Board (EDB) announced today (9) in a press release.

The ANUGA Trade Fair held from 05 – 09 of October 2019 is the largest Trade Show for Food and Beverages in the world. Over 40 leading companies from Sri Lanka participated in the Trade fair which was attended by over 7,000 companies from over 100 countries in the food and beverages sector.

Visitors to the Sri Lanka pavilion had the opportunity to savour the spices and attended the Sri Lanka Culinary Show, the release added.

July 15, 2019 bythemorninglk No Comments
In Sri Lanka, emerging evidence suggests that economic relations with China are broadening to include a shift towards more foreign direct investments (FDI) and trade flows.

August 5, 2019 bythemorninglk No Comments
oDoc, Sri Lanka’s video medical consultation platform, recently took its services to the region by moving into Bangalore, India in February. According to its Co-founder, this is just the beginning.