World Bank Group in its publication “South Asia’s Hotspots – The Impact of Temperature and Precipitation Changes on Living Standards” projects that by 2050, Sri Lanka’s highly urbanised and densely populated Western Province would experience a decline of 7.5% in living standards if necessary climate change adaptation measures are not considered.

Meanwhile, the Northern and North Western Provinces would become the most vulnerable regions to experience the effects of change in living standards due to the changes in average weather, followed by the North Central Province.

In order to understand the long-term impacts of heat weather and the prevailing drought situation, The Sunday Morning spoke to Climate Change Secretariat Director Dr. R.D.S. Jayatunga. We inquired as to how the rainfall and climatic changes are affecting Sri Lanka and whether there is going to be a continuous decline of rainfall in many parts of Sri Lanka in the coming years.

“When defining seasonal weather patterns and long-term climate change, there seems to be a common misunderstanding. Climatic change is generally observed over a long period of time and it would generally be for a period of 30 years. When we look at rainfall in the past 30 years and project rainfall for the next 30 years, we have identified that there is a reduction in rainfall.” 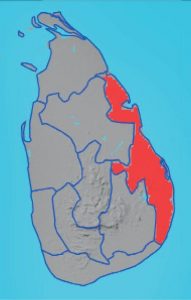 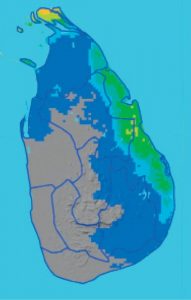 Dr. Jayatunga further noted that in recent times, there have been severe changes in weather patterns as well. Talking about the present weather in Sri Lanka, he stated that the dry heat spell should have ideally subsided by the end of May, although it seems to have continued even towards July.

Furthermore, some areas experience torrential rains that should ideally be the rainfall for around five days, but it takes place between 24-48 hours.

“What is now observed is that the Wet Zone is receiving too much rainfall and the Dry Zone is not receiving any rain. Considering that Sri Lanka is still a more agriculture-driven economy, in the immediate future, we need to look at methods to divert that excess water to the Dry Zone. Moreover, we would also need to look at adaptation measures that could be implemented for key sectors,” Dr. Jayatunga elaborated.

He explained that the ancient tank cascade system in place – once rehabilitated – could easily solve the problem of providing water to the Dry Zone during droughts. Moreover, Dr. Jayatunga noted that the public needed to be made aware how to conserve water catchment areas and on how to rehabilitate watersheds that are spread across the country.

“We have already witnessed the impact of climate change with many farmers abandoning their work in the fields due to the lack of rainfall and sometimes too much rainfall. The North Central Province experienced a severe drought since 2015 which went on for nearly four years, while in some parts of the country, there were severe floods and landslides.”

The Climate Change Secretariat meanwhile has identified several sectors vulnerable to climate change and has suggested an action plan to each of these sectors that would assist us to adapt to climate change, namely food security and water resources, coastal and marine sector, health, human settlement and infrastructure, ecosystems and biodiversity, tourism and recreation, export agriculture sector, industry, energy, and transportation.

He further stated that around 28% of the country’s population depends on livelihoods related to agriculture, which are highly dependent on climatic conditions. Impacts on agriculture will place not only the livelihoods of farmers, but the food security of the entire population at risk.

Poverty is also a major vulnerability-enhancing factor. Even though Sri Lanka has been successful in reducing the poverty head count ratio to a single digit, studies on multi-dimensional poverty indicates that people who are marginally over the poverty line could fall below the line easily due to various livelihood shocks. Hence, climate change impacts have the potential to reverse the country’s achievements in poverty alleviation, unless countered through appropriate measures of adaptation, Dr. Jayatunga elaborated.

“Based on the present wind speed, we have forecasted that there might be light showers over the next week. But the forecasted rainfall will not be able to break this prevailing dry spell. We have also observed that the monsoons for this year have slightly shifted. It is too soon to say that this is directly linked to climate change as seasonal weather needs to be observed over a longer period of time to confirm such observations,” Department of Meteorology Director – Weather Forecasting and Decision Support A.R. Warnasooriya explained.

January 22, 2019 bythemorninglk No Comments
Over the last decade, international schools are sprouting like mushrooms in Sri Lanka