Cheers for beer but not arrack in 3Q 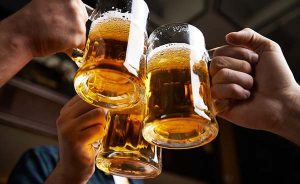 According to the financial statements of 3Q of FY 2018/19, Lion Brewery has seen its profits soar while the Distilleries Company of Sri Lanka PLC’s (DCSL) profits have, comparatively, only grown slightly.

Sri Lankan-owned and operated beer manufacturer Lion Brewery (Ceylon) PLC recorded a net profit of Rs. 1.1 billion in the third quarter of financial year 2018/2019, a whopping growth of over 160% compared to the corresponding period in the FY 2017/2018.

In the third quarter of FY 17/18, Lion Brewery reported an operating profit of Rs. 0.85 billion.

Lion Brewery’s profit before taxation in this period was Rs. 1.4 billion while it was Rs. 0.5 billion in the corresponding period of the previous year.

YoY improved performance of Sri Lanka’s and the Maldives’ beer market leader was driven by the increased number of tourist arrivals to the country and also the reduction on tax on beer in the Budget 2018 according to experts which increased the per capita consumption of beer.

In November 2015, excise duties on beer were increased by 70%, shifting consumer from beer to hard liquor, accounting for over 65% of the legal alcohol consumption.

The company which received international recognition over the years is managed by Chairman D.A. Cabraal and CEO Suresh Shah. The parent company of Lion Brewery (Ceylon) PLC is Ceylon Beverage Holdings PLC and the ultimate parent company is Bukit Darah PLC.

Meanwhile, premier blue-chip company and the largest distiller in the country, the Distilleries Company of Sri Lanka PLC’s (DCSL) net profit grew by 19% during the third quarter of FY 18/19 as it went up to Rs. 1.2 billion from Rs. 1 billion compared to the same period in FY 17/18.

Gross profit during this period grew by 8% YoY while the gross revenue and net revenue came down by 6.8% and 3.7% respectively.

Profit before tax from continued operations grew by 17.9% YoY during this period as it has increased to Rs. 2.1 billion from Rs. 1.8 billion in the third quarter of FY 17/18.

However, total comprehensive income during the third quarter of FY 18/19 was slightly lower to that of the corresponding period in FY 17/18 as it declined to Rs. 1.32 billion from Rs. 1.37 billion.

Three weeks ago, DCSL revised prices of liquor products owing to the increase in cost of production, stimulated by the rupee depreciation.

However, the price of a half-bottle of “Special Arrack” was decreased by Rs. 20 while prices of certain products remain unchanged.

According to Retired Maj. Gen. Mano Perera from the DCSL Management Team, beer price reduction under the Budget 2017 resulted in dropped sales since then.

He also attributed this decline to illicit alcohol manufacturing that takes place in Sri Lanka.

According to the World Health Organisation (WHO) Global Status Report on alcohol for 2018, 40% of Sri Lanka’s liquor production is being undertaken illegally.

This causes a whopping loss for the Government in terms of excise duty and creates a drop in revenue for established distilleries.

DCSL is a diversified Sri Lankan conglomerate owned by Chairman Harry Jayawardena and was one of the first Sri Lankan companies to be listed in Forbes’s Best Managed Companies under a billion US dollars.

February 16, 2020 bythemorninglk No Comments
Asia Securities analyses what impact Coronavirus could have on Sri Lanka, considering China is a significant source of tourism and key raw materials for local industrial production and agriculture.