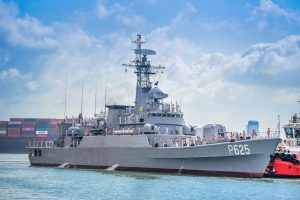 A modernised military frigate gifted by Chinese arrived in Sri Lanka today (08) at the Colombo harbour to join the Sri Lankan Navy fleet.

Upon its arrival, Commander of the Navy Vice Admiral Piyal De Silva, flanked by senior officers, made an inspection visit onboard the ship and supervised the functional and operational aspects of the vessel.

The 112m long and 12.4m wide frigate, built in 1994, will be utilized for patrol and surveillance missions in the deep seas around Sri Lanka once the ship has been commissioned.

The ship will also be used for search and rescue operations to provide security and assistance to naval and fisheries community.

The ship is scheduled to receive its auspicious commissioning in the near future.

June 5, 2020 byTSM Web Desk No Comments
A murder suspect has died in a shootout with the police in Monaragala today.

March 12, 2019 byRandev No Comments
The Light Rail system that was proposed in the first reading of the 2019 Budget is due to commence its construction this year.