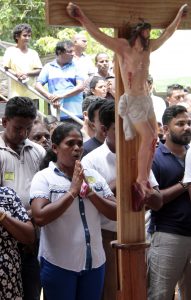 The suicide bomber had arrived in Batticaloa on Saturday (20) and stayed at the Mosque in town. He had finished his morning prayers and then headed towards his target, St. Mary’s Catholic Cathedral.

Upon reaching the cathedral at 8.30 a.m., finding out that the morning service had already finished, he had then made his way to the Zion Church which was just 50 metres away from St. Mary’s Church.

Many people from out of town attend this church. Therefore, even when the attacker arrived at church, no one suspected him. After arriving at the church, he was greeted by one of the pastors, who had asked him to go and take a seat inside. However, he was stopped by Ramesh Raju at the garden, who questioned what was in his bag.

Though the bomber insisted that he was a videographer who was to film the service, Raju had suspected his intentions and blocked him from entering the church premises. The panicked bomber had then and detonated the bomb around 9.05 a.m.

As soon as the blast took place, the first responders to arrive at the site were the Municipal Council’s Fire Brigade. The Police and the Prison Officers had arrived later on. People from the area had rushed in to take the injured to the hospital which was just a kilometre away from the scene.

The Batticaloa Hospital was well-equipped and staffed to treat the casualties, and out of the 100 that were injured, only 65 are currently undergoing treatment at the hospital, with others discharged after recovering from minor injuries. At first, there was a deficit of O Negative blood, but the people from the area quickly gathered to donate blood. 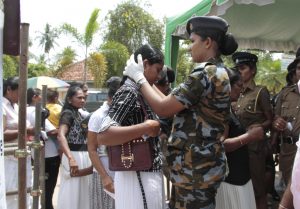 Security has now been tightened and there is a heavy police presence in the town. The Muslims who own shops in Batticaloa fear for their lives, and are not coming to conduct their trade in the town following the attack.

The dead in the East have been laid to rest. The Mayor declared Wednesday a day of mourning for Batticaloa town, so all the shops were closed in view of it.

February 9, 2020 byMaheesha Mudugamuwa No Comments
Health officials continue to maintain the alert over the novel coronavirus with urgently needed medical supplies, which were not available initially, now being purchased and in stock.

May 6, 2019 bythemorninglk No Comments
As Sri Lankans, we are all too familiar with seeking refuge, seeking asylum, and being internally displaced. Yet, it was a little-known fact that Sri Lanka had opened its doors to asylum seekers and r