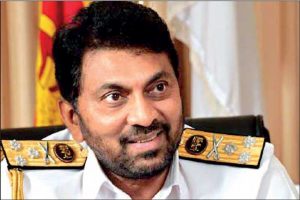 According to sources, a report on the statements which were recorded will be submitted to court at the next hearing.

Statements were recorded from Karannagoda on four occasions – 11, 13, 19 March and 4 April.

On 25 February, Karannagoda filed a fundamental rights (FR) petition in the Supreme Court (SC), seeking an interim order preventing him from being arrested in connection with the investigations into the abduction and killing of 11 youths between 2008 and 2009.

On 7 March, the SC directed the CID not to arrest him or detain him.

However, the Court directed petitioner Karannagoda to appear before the CID for the purpose of recording his statement.
Last week, on the last day of recording statements, the CID recorded a statement from Karannagoda for eight hours.

Hyatt to pull out?

October 22, 2018 bythemorninglk No Comments
Controversy continues to surround the divestiture of shares of Hilton Colombo and Grand Hyatt Colombo with speculation hitting the country's stock market that the Hyatt franchise is considering...