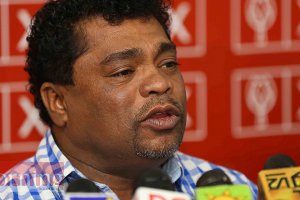 Member of Parliament Piyal Nishantha arrived at the Criminal Investigation Department (CID) today (06) to be questioned over a statement he made related to recent clashes in Kalmunai.

MP Nishantha had claimed that Army personnel were killed during the clash, however, the Army spokesman disputed that claim.

Army and Police had stated that 16 people had been killed during the Kalmunai clash, however, among those killed were terrorists linked to the Easter Sunday attacks and not a single soldier was killed.

Update: United People’s Freedom Alliance Parliamentarian Nishantha has left the CID premises after giving his statement and being grilled by the CID for five hours.

September 26, 2019 byEaswaran No Comments
The United National Party (UNP) has agreed to nominate UNP Deputy Leader Sajith Premadasa as the Presidential candidate of the United National Front, without preconditions.

March 24, 2019 bythemorninglk No Comments
The Government is to expedite a proposed floating solar power project and work on the project is scheduled to commence in November this year.