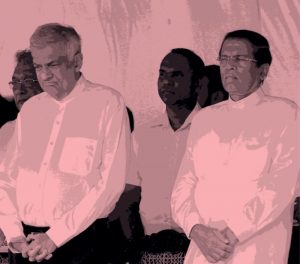 The tense situation in the country, which occurred due to the Easter Sunday terrorist attack, seems to be moving towards an inter-governmental crisis between coalition partners of the so-called Yahapalana Government.

The latest incident was his issue with the Parliamentary Select Committee (PSC) probing the Easter Sunday attacks. The PM-led UNP seems to think that the PSC would give them the chance to “unveil” the failures of the security arrangement in the country.

As we all know, the President has been the Minister of Defence from the day he was sworn, and the Police Department was included in the list of institutions under the Defence Ministry from October 2018.

As we all witnessed, the Easter Sunday attacks occurred when intelligence details of the country were compromised and intelligence briefs provided by external sources were not taken into serious consideration by the security chiefs.

So the President, in his usual manner, passed the ball to the “official’s”court, claiming he was not informed of these intelligence briefings. Further, the President had blamed two of his main officers – then Secretary of Defence (SD) and the Inspector General of Police (IGP) – as those responsible, who acted in an “irresponsible” manner in their capacities by not taking the required measures with regard to said intelligence briefings.

The President had appointed a commission to look into this failure as well. However, the story presented by the other side of the Government, the UNP, is a rather different one. The PM and the group behind him want to go through the PSC and uncover the “inside” truth of the story from said two officers who were blamed by the President as being responsible for failure of the security arrangements.

An issue then arose where the President openly expressed his displeasure and presented the ultimatum that he would not co-operate with the UNP-headed Cabinet if the events continued in the present manner.

As a result, the internal dispute between the two main power blocks of the country has now come into the public eye. The weekly Cabinet meeting, scheduled for Tuesdays, was not held last week. The backbench MPs of the UNP have started to play the blame game, spreading the idea that a response in the form of an impeachment would be needed.

The response by Speaker Karu Jayasuriya on the President’s remarks on the PSC was also given high priority in government-backed media networks, showing the “coming colour of the return” to the President’s position.

In short, at the centre of it all, the check-mate situation of the governing process which started on 8 January 2015 is now in position. Though it was argued by Colombo’s so-called civil society that “good governance” would be upheld by this President,that the Government will be “so good” and based on a “just society”, it has come to a point where the product of the Government is “so bad”, and governance has been “unjustifiable” by this duo.

It was well argued by many political observers in the midst of the 2015 presidential election campaign that the “mixed policy-driven government” would be a misfortune to the country. The argument was rejected by the majority of the country by accepting the “rhetoric” of Colombo’s civil society as truth and expecting the elected Government to deliver a wonderful governing style.

Two things this Government (run by the leaders of both parties) clearly delivered were none other than the mega robberies, like the Central Bank Bond Scam, and arranged violence against political opponents through different means.

The public service of the country has been put under suspicion from all sections and its work culture has converted into one which adopts a “leaving aside the file” policy. So small-scale work that was supposed to be carried out by minor-level officers was not delivered until and unless that officer was dead-sure that there would be no political repercussions against him.

The sectors where public-private partnership will be needed have become more pathetic and unsuccessful.

New jobs were not created; there were only talks of mega factories such as the Volkswagen factory in Kuliyapitiya and a tyre factory in another area. Apart from the investment gained after “selling prices of state resources”were made available to outside buyers, foreign direct investments (FDIs) were also not at the expected level after 2015.

Local infrastructure facility projects, which had started during the time of the previous regime, have not been completed. An interesting example is the development of the old Colombo-Kandy Road. Its development process is at a halt, and the road was constructed up till Yakkala town, when the previous regime was defeated on 8 January 2015.

A government of this nature which has two faces and conducts hybrid activities in almost all areas has shown us not only the failure of its leadership but also its disaster-driven style of governance.

(Dr. Charitha Herath is a senior lecturer at the Peradeniya University. The writer can be contacted via Twitter on @charith9)

May 27, 2019 bythemorninglk No Comments
President Maithripala Sirisena was in the news this past week, once again, for all the wrong reasons. Less than a week after the annual Vesak day presidential pardons which are handed out to individua

Broken shield and weapon of choice

June 24, 2019 bythemorninglk No Comments
Democracies face the perennial challenge of combating harmful speech. In Sri Lanka, the International Covenant on Civil and Political Rights (ICCPR) Act of 2007 remains at the centre of this challenge