COP25 talks to open as ‘point of no return’ in sight 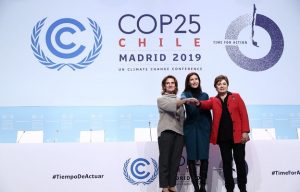 Political leaders and climate diplomats are to meet in Madrid for two weeks of talks amid a growing sense of crisis.

According to UN Secretary General António Guterres, “the point of no return is no longer over the horizon”.

Meanwhile, Save the Children says that climate shocks have left millions in Africa facing hunger.

The charity says 33 million people are at emergency levels of food insecurity due to cyclones and droughts.

This conference of the parties, or COP25, was due to be held in Chile but was cancelled by the government due to weeks of civil disturbances.

Spain then stepped in to host the event, which will see 29,000 attendees over the two weeks of talks.

Speaking ahead of the meeting the UN secretary general said the climate crisis was imminent and political leaders had to respond.

“In the crucial 12 months ahead, it is essential that we secure more ambitious national commitments – particularly from the main emitters – to immediately start reducing greenhouse gas emissions at a pace consistent to reaching carbon neutrality by 2050.

“We simply have to stop digging and drilling and take advantage of the vast possibilities offered by renewable energy and nature-based solutions,” Guterres said.

Almost every country in the world has now signed and ratified the Paris climate agreement and under the terms of the pact they will all have to put new climate pledges on the table before the end of 2020.BBC

February 20, 2020 byTSM Web Desk No Comments
Two Japanese passengers who contracted the new coronavirus on board a cruise ship quarantined in Japan have died, officials say.

North Korea has lashed out again at the US for not lifting sanctions against the country. The foreign ministry said it had made various goodwill gestures, and yet the US was still following an “outdated acting script” and jeopardising any moves towards denuclearisation. North Korea remains under a range of[…]