September 8, 2018 by The Sunday Morning No Comments 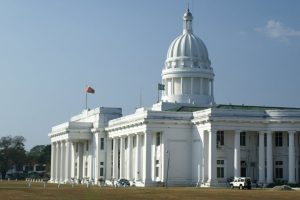 Concerns have been raised over the tender awarded by the Colombo Municipal Council (CMC) to a private company to maintain public toilets.

They Janatha Vimukthi Peramuna (JVP) alleged that the CMC had not followed the correct tender procedure when it awarded the public toilets tender to a private company where the council was obliged to pay Rs. 200,000 for maintaining of these toilets.

In addition to the infrastructural maintenance of those toilets, the electricity and water bills were also paid by the council, JVP councillors alleged.

JVP Councilor Hemantha Weerakoon told The Sunday Morning that the private company was also allowed to charge Rs. 10 or Rs. 20 from each person and the money would not be given to the CMC.
“We have not heard of or seen these types of tenders before. I don’t think a single country in this world takes such decisions and burdens the taxpayers more,” he stressed.

Weerakoon highlighted that it was only the JVP councillors who raised concerns over such decisions. “None of the UNP, SLFP, or SLPP councillors are opposed to this decision,” he added.

The toilets had been built by the CMC and it was only the maintenance part that had been given to the private company. Therefore, there was no need to pay them extra money, Weerakoon said.

“CMC is one of the top government-owned institutions in which massive corruption and fraud takes place. Here, if the tender is given to a friend of a councillor, whatever amount the council wastes goes unopposed. Ultimately, they spend taxpayers’ money for unnecessary things, even though there are a lot more things the council has to do for the public,” he added.

Refuting the allegations levelled by the JVP councillors that the CMC pays Rs. 200,000 per month to a private company for its maintenance, the CMC’s Director of Engineering Works A.C.M. Fazal said the council paid only Rs. 85,000, and out of the total 18 toilet units, only a few of them had been outsourced.
“Instead of looking at the cost, the CMC wanted to make sure that it offers the best service for the public and people didn’t know how much it cost for the repairs,” he said.

“There are about 55 toilet units under the CMC, but toilets in several areas – especially Colombo North –have been abandoned for years because people have started building their own toilets and nobody uses public toilets. Although they are abandoned, the CMC has to bear the electricity and water bills and eventually public toilets become a liability.”

The Director stressed that even though the CMC built these public toilets, some of them had already been outsourced due to the severe shortage of manpower; therefore, there’s a nominal charge when people use these toilets.

“We have identified nine more locations to establish public toilets and we are introducing toilets which could be used by differently-abled persons as well. We also want to ensure the safety of users and therefore, we are in the process of building separate toilets for gents and ladies. We have a team of district engineers who inspect these toilets weekly,” he added.

March 31, 2020 byTSM Web Desk No Comments
The Colombo Stock Exchange (CSE) will reain closed from 01st of April 2020 until the curfew is lifted.

January 19, 2020 bythemorninglk No Comments
Indian train engines imported to Sri Lanka under an Indian credit line would be idle till the end of this year due to a delay in importing the suitable compartments.