Code of conduct must be strictly enforced: Gamini Jayawickrema Perera 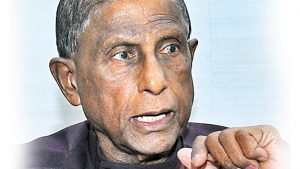 United National Party (UNP) senior and Minister of Buddha Sasana and Wayamba Development Gamini Jayawickrema Perera told The Sunday Morning that it was high time the Parliamentary Code of Conduct was properly implemented and errant parliamentarians were brought to book. Below are excerpts of his interview with The Sunday Morning:


Has Parliament lost respect as a result of the way some MPs behave and the words they use?

Yes, it has resulted in Parliament losing respect. The behaviour of parliamentarians has been terrible. I condemn it and it is a sad situation. Parliamentary discipline must be made stricter. It was a disgrace to see MPs behaving in such a manner especially when students were watching. It goes live on TV as well. I think it’s high time the Speaker took stern disciplinary action.


What steps do think your political party needs to take to control your MPs?

The United National Party (UNP) is a party with discipline from its inception. So, we must maintain discipline. We must advise and warn our MPs to ensure that they don’t misbehave. They must be made to realise that their actions reflect not only on their character but that of the Party and their voters as well.


Certain MPs have bad track records and have even been accused outside of Parliament of various wrongdoing. Should such MPs be in Parliament in the first place?

I believe this is the fault of the voters. They are the ones who have voted in bad characters to Parliament. We saw a trend in the recent past where film stars, musicians, and sports celebrities were being voted into Parliament. The voter must think of the quality, the political party and its policies, the candidates and their behaviour, the level of honesty, and vision, and then decide who to vote for. Because every vote counts towards the country’s future. That is democracy.


Do you think the public needs to be educated far more on the representatives they elect to Parliament, to ensure those elected have a good standing in society?

Yes, that’s what I said before. The public should be made aware of this so that they understand their responsibility as voters. We have seen in past elections where liquor was distributed to buy voters and millions of rupees were spent for that, and the people just went for a meal and a drink and then voted that candidate in. Is that the sort of voter behaviour this country needs? The voters, especially the youth, must think of the country and its future when they vote.


Parliament had recently approved a code of conduct for MPs. Is this code even taken seriously?

I think it has to be taken seriously. The Code of Conduct must be properly implemented. For example, action must be taken against the perpetrators of the incident in October last year, where there was violence in Parliament.

Unfortunately, we saw many MPs, including the Opposition Leader, demanding that this issue not be taken before the judiciary. But why not? Parliamentarians are not above the law. They are servants of the people, as they have been elected by the people. They must be punished, and maybe then MPs will begin behaving in a better manner.


Should there be a stricter system in place to ensure MPs respect Parliament?


Parliament is open to students, members of the general public, and the diplomatic community. Should this be restricted if MPs are going to continue to behave the way they’re behaving?

No. You should not restrict that access to the public, as such incidents don’t happen often – only once in a way. What must be done is that when such incidents happen, the Speaker must stop parliamentary proceedings and have all those guests in the gallery – including students and the general public removed from the gallery.
The Parliamentarians must also understand that they are behaving in such a manner before the future generations of our country and that they’re setting an example.


Can Sri Lanka adopt some of the best practices seen in Parliament in some western countries?

It is sad because our Parliament has a long history and therefore, we must maintain its good reputation. I believe that those who misbehave must be punished, irrespective of any party affiliations. Only then will we see MPs behaving better and be able to show the world our true colours.


In your opinion, what best practices can Sri Lanka take good examples from?

I believe that we do not need to learn from any other country if we properly implement the current laws and rules. If you look back at the political crisis of last year, the Speaker stood by his policies, the judges too stood straight and upheld the law. So, I don’t think we need to learn anything from the Western nations. They have already given us democracy, it is up to us to maintain that in a just and honest way.

May 13, 2019 bythemorninglk No Comments
About 600 graduates of the paramedical degree programme in the University of Peradeniya of the 2009 intake had not been given employment after their graduation, The Sunday Morning learnt.

I can do better than the current lot: Dr. Ajantha Perera

October 6, 2019 byThe Sunday Morning No Comments
Renowned environmental and social activist Dr. Ajantha Perera is determined to rid the country of corruption. Being the only female candidate contesting the presidential election,