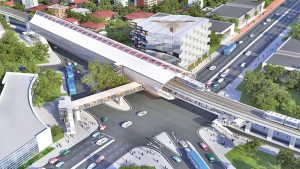 The Colombo Light Rail Transit (LRT) Project is yet to be terminated despite the request made by President’s Secretary Dr. P.B Jayasundara as per the directives of President Gotabaya Rajapaksa last week, The Sunday Morning learnt.

“There is an evaluation committee, and the committee’s recommendation is that maybe this is a costly project and we have to think about the country’s economic situation after the impact of Covid. Therefore, the President’s Secretary requested me to think about this project and take proper decisions. The decision of course cannot be made at the ministry level. It should be done by the Cabinet of Ministers because this project started based on the cabinet decision.”

In a letter written to Ranatunga and copied to the Secretaries of the Treasury and Ministry of Urban Development and Housing, Director General of the Department of National Planning, Director General of the Department of External Resources, and Chairman of the Ministry of Urban Development, Dr. Jayasundara stated that the President had directed him to request the Transport Ministry Secretary to terminate the project and close the project office with immediate effect.

Furthermore, the letter stated that a suitable alternative solution for transportation could be worked out in consultation with the Ministry of Urban Development and Housing and the Department of National Planning of the Ministry of Finance. When asked whether the Transport Ministry was going to submit a cabinet paper to terminate the project, Ranatunga said: “I don’t know which ministry should put forward the cabinet paper. This project was put to this Ministry very recently. Earlier, it was under the Urban Development Ministry. They may submit the cabinet paper from the Finance Ministry’s side or the previous Ministry may be asked to submit the cabinet paper. The Transport Ministry may also be asked to do so.”

The reason for termination, as specified by Dr. Jayasundara in the letter, was that the LRT Project was very costly and thereby not the appropriate, cost-effective solution as urban transportation infrastructure it was billed as. Meanwhile, The Sunday Morning reliably learnt that prior to Dr. Jayasundara’s letter written last Monday (21), a meeting was held on the 18th between Dr. Jayasundara and Ranatunga.

The Sunday Morning also learnt that the detailed design of the LRT Project was already completed by local and international consultants, and based on the final engineering cost estimates, the project cost had now reduced to $ 1 billion.

Furthermore, the cost per kilometre of the LRT Project is now estimated to be around $ 62.5 million, which is far lower than the original estimate. When contacted by The Sunday Morning, University of Moratuwa senior lecturer and transport infrastructure expert Dr. Dimantha De Silva stressed that if the cost of the project was considered to be high, it was because it was a short-distance project. He pointed out that if the distance could be extended to at least 30 km by expanding the line to Kottawa via Kaduwela, the cost per kilometre would further reduce to around $ 55 million.

“The latest calculations made based on the engineering estimates are on a par with international costs as at today, and the cost is not high,” he noted. Meanwhile, Ministry of Transport Secretary Ranatunga revealed that the Ministry hadn’t yet analysed the cost of the project, though Dr. Jayasundara said it was costly.

The project and roadblocks

The loan agreement pertaining to the project was signed between Sri Lanka and Japan last March. Accordingly, Japan extended a loan of around Rs. 48 billion to Sri Lanka for the Colombo LRT Project.

The loan for the project was offered on highly concessional terms and conditions, including a 40-year repayment period for funds obtained for consultation services with a grace period of 12 years, a 0.1% interest rate per annum for civil work and equipment, and a 0.01% interest rate for engineering services. Accordingly, in the project, the preliminary base cost estimated during the feasibility study was $ 1,374 million and including price escalation, contingencies, and interest, Sri Lanka and the Japan International Co-operation Agency (JICA) estimated the loan amount to be $ 1,850 million.

In January this year, Ministry of Urban Development, Water Supply, and Housing Facilities Secretary Dr. Priyath Bandu Wickrama wrote to the Project Director of the LRT Project expressing his concerns over the project funded by JICA.

In his letter copied to the Secretaries of the President, Prime Minister, and Treasury, he raised eight concerns regarding the project, and asked the Project Director for explanations to be given on or before 10 February 2020. The concerns raised in his letter include the total loan amount, consultancy fee, unit costs of the rolling stock, the Japanese monopoly with regard to the rolling stocks to be used for the project, issues pertaining to the design, the marshy lands in the locations selected for the depot and workshop, cost increases and environmental impacts, and restricting the consultancy service on design and supervision to a lump-sum contract instead of a time-based contract.

The LRT’s Project Management Unit (PMU), in its lengthy explanation to Secretary Dr. Wickrama, as seen by The Sunday Morning, stated that the land acquisition for the project is already in progress, as lands in depot areas were identified and information on the same was sent to the Government Valuation Department for valuation purposes, while the school buildings affected along the trace were also discussed with the Chief Secretary, provincial/zonal directors, and the principals.

April 23, 2019 byRandev No Comments
President Maithripala Sirisena has stated that he hopes to affect serious changes among the heads of Sri Lanka's security forces within the next 24 hours.