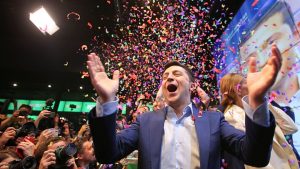 With nearly all ballots counted in the run-off vote, Zelensky had taken more than 73% with incumbent Petro Poroshenko trailing far behind on 24%.

“I will never let you down,” Zelensky told celebrating supporters.

Poroshenko, who admitted defeat after the first exit polls were published, has said he will not be leaving politics.

Political newcomer Zelensky, 41, is best known for starring in a satirical television series Servant of the People in which his character accidentally becomes Ukrainian president.

He told reporters he would “reboot” peace talks with Russian-backed separatists fighting Ukrainian forces and volunteers in the east.

“I think that we will have personnel changes. In any case we will continue in the direction of the Minsk [peace] talks and head towards concluding a ceasefire,” he said. (BBC)

March 15, 2019 byRandev No Comments
There are "multiple fatalities" after shootings at two mosques in the city of Christchurch, police in New Zealand have confirmed.