Commander-in-Chief of the Land Forces lands in SL 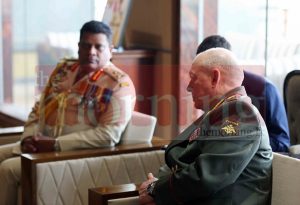 General Oleg Salyukov, Commander-in-Chief of the Land Forces of the Russian Federation, has arrived on a five-day long goodwill tour on the invitation of Commander of the Army Lieutenant General Shavendra Silva.

He will also pay tribute to War Heroes’ Monument at Sri Jayewardenepura before he visits the Sapugaskanda Defence Services Command and Staff College, Sri Lanka Armoured Corps Regimental Centre and several other places of interest.

Adding grandeur and dignity, the visiting Commanding General of the Army and Commander-in-Chief of the Land Forces of Russian Federation as a special distinguished guest will participate in the 72nd National Day celebration at the Independence Square on 4 February 2020.

Russia and Sri Lanka record a history of more than 62 years after diplomatic relations were formally established on 19 February 1957. With long-lasting ties, fruitful and extensive exchanges in different spheres between the countries. Both countries have reached new heights with stronger economic ties, particularly with Russia being one of the largest importers of Ceylon Tea and with the signing of a number of bilateral agreements in various fields of cooperation which include education, trade, culture, fisheries, and tourism, among others.

Salyukov is a a combat veteran with 45 years in service and decorated with orders and 9 medals will arrived.

September 29, 2020 bythemorningeditor1 liberty No Comments
The next Bishop of Colombo will be Fr. Dushantha Rodrigo, Archbishop of Canterbury Justin Welby announced yesterday (28).

Civil cases filed in the US against Gotabaya Rajapaksa

April 8, 2019 byEaswaran No Comments
The ITJP and the US law firm Hausfeld have filed a civil damages case in Califonia against former Sri Lankan defence secretary, Gotabaya Rajapaksa, on behalf of a Tamil torture survivor