Consensus builds around the privatisation of tourism promotion 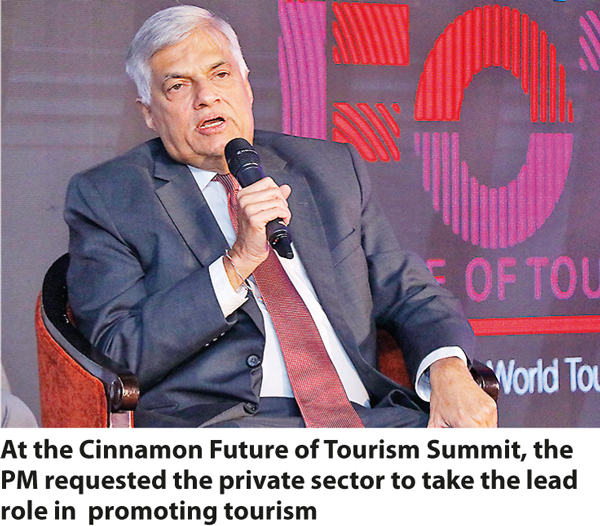 Consensus is growing amongst key tourism industry stakeholders that Sri Lanka’s tourism promotion activities should be taken over by the private sector, as mooted by Prime Minister Ranil Wickremesinghe last week.

Addressing the gathering during the Cinnamon Future of Tourism Summit 2019, the Prime Minister requested the private sector to take the lead role in promoting the tourism industry. In return for the private sector taking on this added responsibility, he promised that the Government would stop overregulating the industry.

Highlighting the post-Easter tourism recovery campaign which never materialised, the Prime Minister proposed a public-private partnership (PPP) for tourism promotion, with the private sector having a larger stake.

“It has taken some time. I’ve been doing some of the pushing. The Treasury has agreed, but we have to move the other agencies along. This is why we should have a public-private partnership with two or three companies. The industry would have a larger share and we would pass the funds straight to these companies, so they can go ahead with the promotion. That seems to be the way out of this. But the industry as a whole must put in money and take part in this without leaving it to a few people.”

Following the statement made by the Premier, The Sunday Morning Business spoke to Minister of Tourism Development, Wildlife, and Christian Religious Affairs John Amaratunga, who noted that he is in agreement with the privatisation of tourism promotion, but said it would happen only next year.

Further, Amaratunga noted that even though privatisation would curtail the existing powers and influence of the Ministry of Tourism, he does not have any issues with that. “I do not have a problem with that. I think the Tourism Ministry’s powers should be limited,” Amaratunga noted.

Meanwhile, The Sunday Morning Business also contacted Sri Lanka Tourism Promotion Bureau (SLTPB) Chairman Kishu Gomes. He said that the SLTPB should be given more authority to take decisions and execute plans without going through cumbersome and tedious processes such as the procurement process.

“Beyond Rs. 100 million, everything has to go to the Cabinet. Furthermore, any agreement you enter into has to be approved by the Attorney General’s (AG) Department. So, there are a lot of impediments not allowing the system to work the way it should,” Gomes noted.

The SLTPB is the respective government body responsible for handling all marketing and promotional activities related to the travel and tourism industry of Sri Lanka.

Speaking to us, Resplendent Ceylon Managing Director Malik Fernando, who is also the main driver of the #lovesrilanka campaign, endorsed the suggestion.

Fernando emphasised the importance of going for a PPP in tourism promotion as there is a lack of expertise in the government sector with regard to the subject. He added that nevertheless, the funding should be provided by the Government and the entire implementation should be done by the private sector.

“I would like to thank the Prime Minister for considering releasing tourism marketing to a PPP because that is where we are utterly crippled. Many of us in the trade are frustrated because there has not been a campaign, and we are struggling to get one up for next year,” Fernando stated at the event.

#lovesrilanka is an initiative launched by the Sri Lanka Tourism Alliance, a body formed by Sri Lanka’s private tourism sector, soon after the Easter attacks, to promote Sri Lanka to the world.

On 11 August, The Sunday Morning Business exclusively reported that the tourism recovery campaign will not be ready in time to attract winter bookings due to the delayed procurement process.

The Rs. 415 million, 45-day campaign was to target Sri Lanka’s biggest tourism source markets to counter the negative perception of Sri Lanka created following the Easter Sunday attacks and to position it as a safe and attractive destination.

Speaking to us, tourism industry stakeholders opined that with a fresh procurement process being necessitated, following the intervention of the AG, getting a campaign off the ground prior to the global tourism market finalising its winter travel destinations would be next to impossible.

Even if the procurement process was to be fast-tracked considering the urgency of the matter, it is unlikely that a new agency could develop and launch an effective global campaign prior to the end of this month, by which time most international travellers, particularly high-spending westerners, would have finalised their winter plans.

Furthermore, in the event a fresh procurement process is carried out, it is doubtful whether agencies would be keen to bid for a campaign of this magnitude following the issues which have cropped up so far and the tight deadlines it would be required to meet, in addition to the fact that an election is scheduled for November.

However, Amaratunga expressed optimism about launching the campaign in time for winter bookings. “If the agreement is approved by the AG’s Department, we can start immediately,” he told The Sunday Morning Business in early August.

The SLTPB refused to confirm that the campaign would not be ready for winter bookings. However, they added that this was never meant to be a winter campaign and that Sri Lanka needs to reposition itself as a year-round destination as opposed to a seasonal tourist destination.

The recovery campaign, first announced within two weeks of the Easter attacks on 21 April, was only submitted for Cabinet approval in late May, along with the long-term global promotional campaign. The approval was received on 28 May for both campaigns.

However, the campaign ran into trouble when rival advertising agencies alleged that a proper procurement procedure had not been followed in the awarding of the contract to Wunderman Thompson.

The discourse built by these allegations ultimately led the AG’s Department to investigate the matter and conclude that proper procedure had not been followed. It was pointed out that a committee should have been appointed to review the proposal prior to the cabinet paper being submitted and not after, as was the case.

These developments are bound to delay the launch of the six-month, Rs. 500 million global promotional campaign as well, the fortunes of which are tied to that of the recovery campaign due to both being submitted for Cabinet approval with the same cabinet paper.

March 22, 2020 byCharindra No Comments
President Gotabaya Rajapaksa has instructed the Export Development Board (EDB) to submit a detailed proposal with the ideal stimulus plan for Sri Lanka’s economy with regard to its exports.

Withholding tax on NRFC to be removed?

October 21, 2018 bythemorninglk No Comments
The Sunday Morning Business learns that plans are underway to remove the withholding tax (WHT) imposed on the interest paid to Non-Resident Foreign Currency (NRFC) accounts.