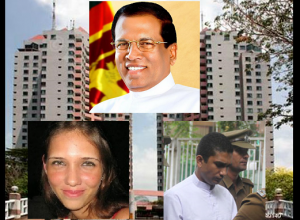 The Commissioner General of Prisons T.M.J.W.Thennakoon said the Prisons Department yesterday received the document signed by the President to grant Presidential pardon to the convicted.

“When my sister arrived home he chased her from the 23rd floor, pushed her, strangled her and then smashed her skull on the cement floor. She was found on the 19th floor. He had the chance to walk away and to stop but he didn’t. I still recall sitting in court and hearing how her skull was fractured into 64 pieces. My father had to identify his daughter in the morgue with no face,” Yvonne’s sister Caroline Jonsson-Bradley said in a statement last month.

Speaking at the National Youth Model United Nations conference held in Colombo recently, Sirisena said Jayamaha was sentenced at the age of 19, and was now a reformed individual. He added that the latter had also completed a PhD while in prison.

Following the President’s announcement Caroline Jonsson said, “Did I know that my sister’s murderer being released was something my family and I could have to face someday? Of course we did, as his family has used power and money in their attempts to get him released, but not for the reasons recently outlined by the President.”

In 2006 the High Court ordered a 12 year prison sentence for Jayamaha. In 2012 Jayamaha was given the death sentence by the Court of Appeal  following an application by the Attorney General’s department against the earlier verdict.

In June 2014 the Supreme Court upheld the death sentence on the convict.

July 5, 2019 byEaswaran No Comments
The Supreme Court today (5) issued an interim order staying the implementation of the death penalty until October 30.