February 26, 2019 by themorninglk No Comments 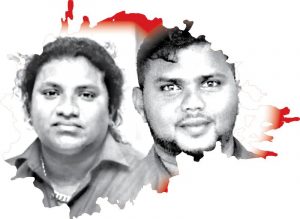 The gruesome murder of two businessmen in Rathgama has put the spotlight on a group of policemen suspected of being involved in the crime.

The killing of Manjula Asela Kumara (33) and Rasin Chintaka (31), residents of Ratnaudagama, Boossa, has left their friends and family in a state of shock.

Even though the Criminal Investigation Department (CID) revealed how the two men were killed and their bodies burnt, the brutal killing is still shrouded in controversy, especially as the motive remains unclear.

The authorities have yet to answer many paramount questions in the case.

Among these are why the police allegedly did not respond when they were alerted that the two men were being abducted by a group of unidentified men clad in what appeared to be police uniform, and then why they were killed in such a brutal manner.

On Friday (22), exactly a month after the two businessmen went missing in Rathgama on 23 January, the CID revealed that they were murdered in a private house in Akmeemana. The private house is located close to the Akmeemana-Gonamulla junction along the Galle-Udugama Road, 18 km from the residence of the businessmen.

Police Spokesperson SP Ruwan Gunasekara said that, as gathered after the probe, the bodies of the two men had been burnt in the Medagangoda Forest Reserve in Walasmulla. He went on to note that as per the orders of the IGP, the OIC of the Special Investigations Unit and a chief inspector and 15 other police officers were transferred from the Southern Province to the Western Province.

It is noted that the workplace of the owner of the vehicle suspected to have been used in the abduction is located 900 m away from the Akmeemana house.

The Police suspect that the two businessmen were murdered at this house after which their bodies were taken to a separate location and destroyed. This led to the search of the Medagangoda Forest Reserve, located 70 km from Akmeemana.

Bone fragments were discovered from a site that was set on fire inside the reserve. A team including the Magistrate of Wallasmulla Suranga Munasinghe, a specialist of the Fire Investigations Division of the Government Analyst’s Department Roshan Fernando, and the Judicial Medical Officer inspected the site.

The Galle Magistrate ordered detectives to detain and interrogate Sub-Inspector Viraj Madusanka, attached to the Southern Province Special Investigations Unit, for a period of 48 hours.

He was produced before Galle Chief Magistrate Harshana Kekunawela. Earlier, Chief Inspector Nishantha De Silva of the Southern Province SIU was arrested over the incident and he is currently remanded in custody.

Investigations into the incident were handed over to the CID by the IGP after an anonymous letter received by the family of one of the businessman was made public by the media.

Senior DIG of the Southern Province Ravi Wijegunawardena was transferred to Police Headquarters on a temporary basis following the abductions, and several policemen were arrested on suspicion with regard to the case.

Before the investigation was handed over to the CID by the IGP after receiving the anonymous letter, the two families alleged that the Police had downplayed the incident and failed to take prompt action. According to them, it was the Police that should take responsibility for the alleged abduction of the two innocent businessmen.

When The Sunday Morning visited the two families last week, they were unaware that their loved ones were killed and had not received any update since they went missing last month.

However, even without any updates regarding their whereabouts, the two families believed the two men were alive at that time. Even last Wednesday, the two wives of the missing businessmen seemed depressed and were frustrated, and continued to eagerly await their husbands’ return.

“We have a small farm shop in Rathgama, and Manjula and I were both working there. On the morning of 23 January, we both went to the shop with our youngest daughter and Manjula left to get a meat order from home. That was the last time I saw my husband,” she said.

When Manjula came back home to take the meat order, Manjula’s mother, Deneththi Danawathi, was at his house speaking to Manjula’s son. In the meantime, Rasin, the other businessman, arrived and conversed with Manjula on the front porch. At this point, Danawathi left the premises and went to her own home, located on the same plot of land. That was the last time she saw her son.

“I didn’t see anything; not even a car or a van. Everything happened so quickly it seems, and only Mala (a neighbour) saw them being taken away in a dark blue van by a group of armed individuals,” she said.

According to Samanthi, the eyewitnesses Mala and Nilmini, neighbours of the victims, allegedly saw a white car and a dark blue KDH van pull up before Manjula’s house where Manula and Rasin were talking, they were then handcuffed and shoved inside a vehicle by 13 individuals dressed in police uniform.

Upon hearing the news, Manjula’s mother rushed to inform her daughter-in-law, rushed home afterwards, and then headed straight to the Rathgama Police Station along with Rasin’s wife, where the policemen informed them that they had no knowledge of where the men were taken as no warrants were issued for their arrest.

Following this, the family tried to lodge a complaint to the Police about the two missing persons, but the Police had refused to, according to Samanthi.

Samanthi said they then went to the Galle Police Station where they were turned away once again as the officers there too refused to lodge the complaint, and informed them that they would hear news of the two men by 5 p.m. if they were taken to any police station within the country that day.

Not having the slightest clue as to where their husbands were, the two wives went home and returned at 5 p.m., only to be kept waiting for two hours before the Police filed the entry.

In a desperate attempt for justice, the families of the two missing organised a protest.

Samanthi said they were then called by the Police and forced to sign a contract that they weren’t allowed to read. After signing the document, the Police had informed them that they could no longer protest, and that if they protested, they would be punishable by law, face six months in prison, and be imposed with a Rs. 5,000 fine.

Desperate, the families continued to await information about their loved ones.

“After hearing no news whatsoever, we went to the Police once again to get more information. This was when ASP Sathish Gamage assured us that our husbands were in custody and that they would be released to the Criminal Investigation Department (CID) within 24 hours, simply because the Police was ‘sick of seeing our faces’,” she stressed.

Elated by the information they just received, the wives went home with hopeful hearts. Twenty-four hours turned into 48, which then turned into days, and so on. The families then lost hope once again, she said.

While they continued to wait for updates, the families received a letter from an anonymous source that stated that the missing persons were allegedly accidentally murdered in the hands of the Police.

The fate of Manjula and Rasin may have turned out differently if the Police took the right steps and commenced an investigation soon after the complaint was lodged, the two families claimed.

Challenging wrongdoings by Police is difficult. Many officers protect themselves under the narrative of heroism, sacrifice, and the level of risk when their actions are questioned.

However, being in that position, having the ability to attribute certain actions to risks posed by the job, does not allow them to maliciously injure or recklessly take the lives of the people that they – police officers – are sworn to serve and protect.
When an officer stops serving and protecting, they should be severely punished both, for the violation of their oath to protect and for violating the public’s trust.

This story of the two families raised a myriad of questions over the conduct of the Police in Sri Lanka.

When The Sunday Morning contacted Attorney-at-Law Senaka Perera, who is also the Chairman of the Committee to Protect the Rights of Prisoners, he said the Police could keep the suspects in their custody for only 24 hours, and that under special circumstances, they could keep them for 72 hours, depending on the case.

He said that there were several cases where the victims were treated inhumanely while they were in custody, and that the Police nowadays were treating suspects inhumanely believing them to be the culprits.

“Every citizen has the right lodge a complaint to the Police, and according to the law the Police cannot reject their requests,” he noted.
According to domestic and international laws, the Police are prohibited from using excessive force, conducting arbitrary arrests and detentions, and torturing or ill-treating suspects in custody.

However, the Police often bypass or ignore procedural safeguards laid out in Sri Lankan law and in international human rights law, including in the International Covenant on Civil and Political Rights to which Sri Lanka is a party.
These include the right to be informed of criminal charges, to have access to a lawyer of one’s choosing, and to be promptly brought before a judge.

Sri Lanka’s Code of Criminal Procedure contains further safeguards, including the registration of an arrest and production of the accused before a magistrate within 24 hours of the arrest.

According to the Article 11 of the 1978 Constitution: “No person shall be subjected to torture or to cruel, inhumane, or degrading treatment or punishment.” But surprisingly, the right to life is not included in its enumeration of fundamental rights.

However, the State Minister of Defence stressed that DIG Ravi Wijegunawardena was not aware of the case but that he was transferred to allow the CID to investigate the incident.

April 26, 2019 bythemorninglk No Comments
As the country celebrated the Sinhala and Tamil New Year on a grand scale last week, some plantation workers were engaged in part-time jobs to earn some extra money to manage their daily needs.

May 27, 2019 bythemorninglk No Comments
The Tamil political prisoner issue has stalled once again, resulting in concerns being raised within the Tamil National Alliance (TNA) over the deafening silence of its own party leadership.