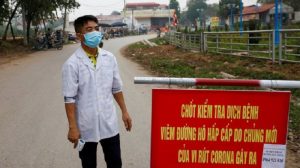 Coronavirus cases are not rising dramatically outside China despite a spike in Hubei province, the World Health Organization (WHO) says.

The only exception was on a cruise liner docked in Japan, where 44 new cases were reported, bringing the total there to 218.

There was also no major shift in the coronavirus’s pattern of mortality or severity, according to the WHO.

The latest figures show 121 new deaths in China, bringing the total to 1,380.

The total infections jumped by 5,090 to 55,748 cases on 13 February, the National Health Commission said on Friday.

The latest figures from Hubei recorded 116 deaths and 4,823 new cases. That is a smaller increase than the previous day when there was a spike with 240 new deaths and nearly 15,000 new cases.

However, most of this was down to Hubei using a broader definition to diagnose people, said Mike Ryan, head of WHO’s health emergencies programme.

“This does not represent a significant change in the trajectory of the outbreak,” he said.

Outside China there had been two deaths and 447 cases in 24 countries, he said.

On Thursday Japan announced its first coronavirus death – a woman in her 80s who lived in Kanagawa, south-west of Tokyo.

The woman’s diagnosis was confirmed after her death and she had no obvious link to China’s Hubei province, the epicentre of the outbreak, Japanese media reported.

On Thursday, the US state department said it was “deeply concerned” about the possible effect of an outbreak in North Korea, which has so far not reported any cases.

The US would facilitate assistance from US and international aid organisations to the country, the department said.

Indonesian authorities announced the figure of deaths caused by 7 magnitude earthquake in tourist island of Lombok own West Nusa Tenggara (NTB) province has reached 259 as of Thursday afternoon, feared to increase further as many were still trapped under the rubbles, coupled with unreported burials of the deaths. The[…]

February 5, 2020 byTSM Web Desk No Comments
At least 10 people on board a cruise ship docked in the Japanese port of Yokohama have tested positive for coronavirus, health authorities said.