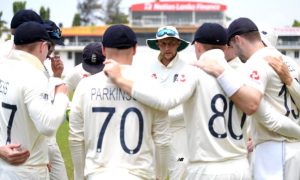 The Sri Lanka vs. England two-match Test series has been postponed due to Coronavirus. England were to play two Tests starting on 19 and 27 March at Galle and Colombo (SSC) respectively.

Their Tour Match against Sri Lanka Board President’s XI was called off at 3.40 pm on its day two, Friday due to the pandemic. The four-day game was to go on till Sunday, 15 March.

England made 463 before SLC Board President’s XI were 150/3 in 40 overs at the time of the stoppage.

ECB full statement on their tour of SL:

Due to the Covid-19 pandemic worsening globally, and after discussions with Sri Lanka Cricket, we have today (on Friday) made the decision to return our players to the UK and postpone the forthcoming Test series between Sri Lanka and England.

At this time, the physical and mental wellbeing of our players and support teams is paramount. We will now look to bring them home to their families as soon as possible. These are completely unprecedented times, and decisions like this go beyond cricket.

We would like to thank our colleagues at Sri Lanka Cricket for their outstanding support and assistance throughout this situation. We look forward to returning to Sri Lanka in the very near future to fulfil this important Test series

The annual MCC Champion County match, scheduled to be played against Essex this year from March 24 to 27 in Galle, has been called off because of the COVID-19 (novel coronavirus) threat. Same is the case with the MCC World Cricket Committee meeting in Colombo, slotted for March 28 and 29.

ICC Board to hold March meeting via conference call only

The ICC Board has decided to hold its next round of meetings, scheduled for end of March in Dubai, via “conference call only”. The ICC announced on Thursday, 12 March that in light of the continued spread of COVID-19 and amid concerns expressed by its members, they will convene remotely to consider matters for urgent decision only and hold the full meetings in May.

Delhi bars all sports activities, IPL to be played to empty stands!

The Delhi government has announced its decision to bar all sports activities in the capital city in the wake of the pandemic threat.

An order signed by Padmini Singla, the Health and Family Welfare secretary to the state government, has directed that all sports gatherings “including IPL”, conferences and seminars with attendances of over 200 are prohibited within Delhi. This, however, might mean that the IPL could still go ahead if played behind closed doors.

As far as the IPL is concerned, Delhi – home to franchise Delhi Capitals – is scheduled to host its first game on the second day of the tournament, on March 30 against Kings XI Punjab, with six further home games in April and May.

A meeting between the IPL governing council and representatives of the eight franchises is scheduled for Saturday but it was learnt on Thursday that there is a strong possibility of the IPL being a severely restricted tournament this year, with at least some part of it being played to empty stands.

While the central sports ministry said it would not stop sporting events from taking place as long as they adhere strictly to governmental guidelines, discouraging mass gatherings, the external affairs (foreign) ministry has gone a step further, saying its advice is to not go ahead with the tournament at this time, but the decision has been left to the organisers.

Kane Richardson will miss the first ODI against New Zealand at the SCG having been tested for COVID-19 after reporting a mild sore throat to Australia’s medical team on Friday. Richardson, who returned from South Africa earlier this week with the rest of the ODI squad, has been isolated for the time being and results of the test are expected Friday afternoon. It is understood that Richardson is feeling fine and concern in the Australia camp is low.

Australia-NZ ODIs to be played behind closed doors

Concerns among Australia’s players about potential exposure to coronavirus in front of large crowds of spectators were a factor in Cricket Australia’s decision to play the one-day series against New Zealand behind closed doors, with the T20I matches at the end of the month in New Zealand are in doubt. The two ODIs in Sydney on Friday and Sunday and the final match in Hobart on March 20 will take place as scheduled but spectators won’t be admitted.

Karachi games of PSL to be played behind closed doors too

Karachi Kings’ match against Lahore Qalandars on Thursday was the last PSL contest at the National Stadium to be played in front of a crowd. In a bid to prevent COVID-19 from spreading, the PCB announced, following advice from the provincial government, that all remaining games at the National Stadium will be played to empty stadiums. At the time of writing, the number of COVID-19 cases in Pakistan stood at 21, with the bulk of them originating in Sindh province, of which Karachi is the capital.

The remaining two ODIs of the ongoing series between India and South Africa will be played to empty stadiums. The development comes in the wake of the Indian government directing the BCCI and other national sporting federations, including the Indian Olympics Committee, on Thursday to “avoid” mass gatherings at sporting events as it takes steps to contain the coronavirus pandemic. Lucknow will be hosting the second ODI on March 16 and Kolkata the final ODI on March 18.

May 7, 2019 byRandev No Comments
The Sri Lankan Cricket team led by Captain Dimuth Karunaratne left the country for the ICC World Cup- 2019 in England and Wales, today (07).